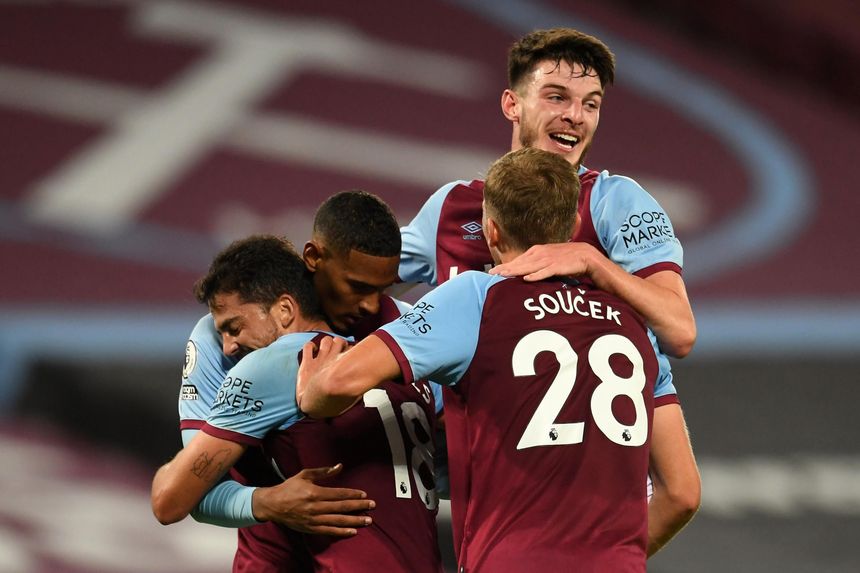 In-form West Ham United will not fear their visit to Anfield on Saturday.

They are playing with a new sense of spirit and adventure in their counter-attacking 5-4-1 formation.

Manager David Moyes has found a formula that suits his players, who will have taken great heart from recent performances.

Since narrowly losing at Arsenal in Matchweek 2, West Ham have claimed two wins and two draws against sides who finished in the top seven last term.

So even though Michail Antonio is ruled out with a hamstring injury, West Ham will retain belief they can pick up a positive result against an under-strength Liverpool side.

Still only 21, Declan Rice has put together a series of accomplished displays and his influence will be of vital importance against the champions.

He has risen to the challenge of taming high-quality opposition, with the defensive midfielder's ability to break up play consistently on show.

Patrolling the middle third alongside the equally industrious Tomas Soucek, the West Ham pair have protected the defence extremely well.

It is largely because of them that only one Premier League side, Brighton & Hove Albion, have faced fewer shots on target than the Hammers.

The England international has made 15 interceptions, second only to N'Golo Kante among Premier League midfielders.

And Rice's confidence on the ball is growing, too.

He boasts a pass accuracy of 86.3 per cent and has tellingly also completed 10 successful dribbles from his deep-lying position.

From one such run he almost scored an incredible solo goal in the 3-0 win at Leicester City.

Only Tanguy Ndombele, with 10 completed dribbles, and Andre-Frank Zambo Anguissa, who has 20, can match Rice for successful take-ons among central midfielders.

How Rice compares to top midfielders

There is no question that Rice’s poise and defensive nous are going to be critical to West Ham's prospects on Merseyside.

If he plays well, another surprise result could be on the cards.

In and out of possession Rice and Soucek are well supported by left-sided midfielder Pablo Fornals.

The former Villarreal star is a hardworking player who tucks in to good effect when West Ham get men behind the ball.

His selfless work rate has played a key role in his team's ability to keep rival sides at bay.

New signing Said Benrahma will no doubt put the pressure on for a starting berth on the left flank, but for now Moyes knows he can trust Fornals to carry out his tactical instructions.

Benrahma must study the role and adapt his own game to make the starting XI.

Fornals, 24, has also chipped in with one goal and two assists this season.

If Fornals can sneak into the space between full-backs and midfielders on Saturday, he possesses the quality to cause Liverpool’s depleted back four problems.

Antonio deserves to be known as West Ham's main man at the moment, for he has been in talismanic form.

But Rice and Fornals are not too far behind in terms of their importance to Moyes’ improving side.