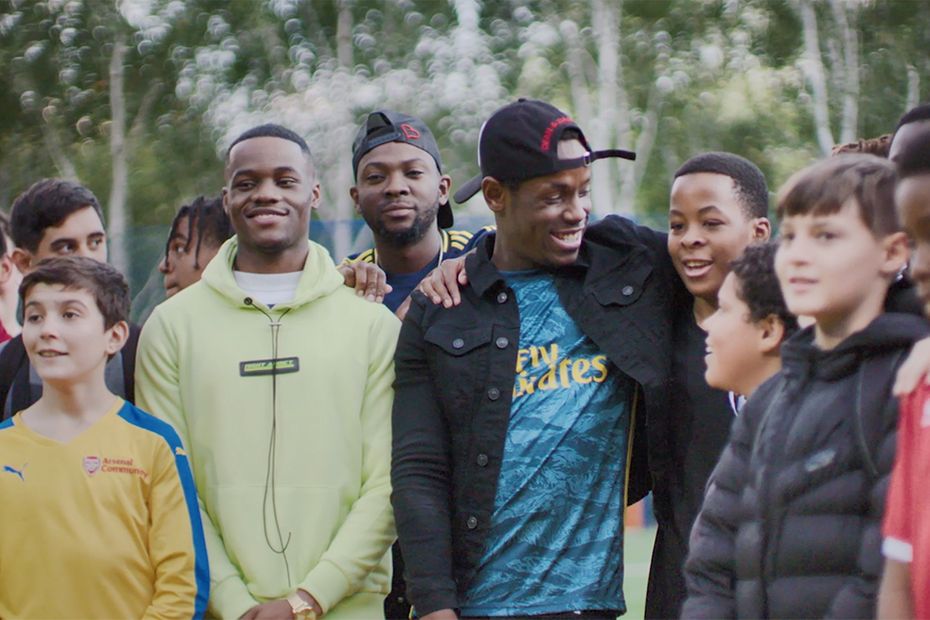 When the director Rapman and the stars of his film "Blue Story" went to see how Arsenal in the Community work with teenagers before the start of the coronavirus pandemic, they were blown away by the impact the club and Premier League Kicks are having in north London.

"There needs to be more light on this," Rapman, pictured, above and centre, said during the visit. "I love seeing young kids coming from unprivileged backgrounds striving for better.

"I want to see them trying to get out of the situation they're in. It's one thing wanting to leave the situation you're in, but you have to be working towards it, and if they're in the Kicks scheme, that’s the first step."

"Blue Story" focused on the challenges faced by teenagers in urban areas. It is a situation that Arsenal have been addressing over the past 14 years through PL Kicks.

One is Dwayne, whose first PL Kicks session was at the age of 12. Now, eight years later, he has a year’s scholarship with the foundation.

"I didn't know you could get into a scheme at 12 that can give you a job at 20," Rapman said. "That's basically like full-on education."

Rapman, Ward and Odubola also visited a PL Kicks session, where they spoke to Jels, another coach for whom PL Kicks has made a difference.

"It’s one thing wanting to leave the situation you’re in, but you have to be working towards it, and if they’re in the Kicks scheme, that’s the first step"

"These people just need something to get them motivated. That’s what kept me in my zone. If you change someone’s perspective and mind, then everything follows.

"It's building a community. It’s more than just getting these kids to play football. I know their parents. I see them and say, ‘How’s school?’

Growing up in south London, Rapman was unable to enjoy the opportunities PL Kicks offered, not just to teenage boys like him but to girls as well, who represent a growing number in Arsenal’s programme.

"I would have loved something like this in the south," he said. "Back in the day, girls weren't even coming on the pitch.

"We never knew if they were good or not because they never wanted to play.

"So when I'm seeing you out here doing your thing, now you've got girls who are looking up to you lot, that want to play ball."