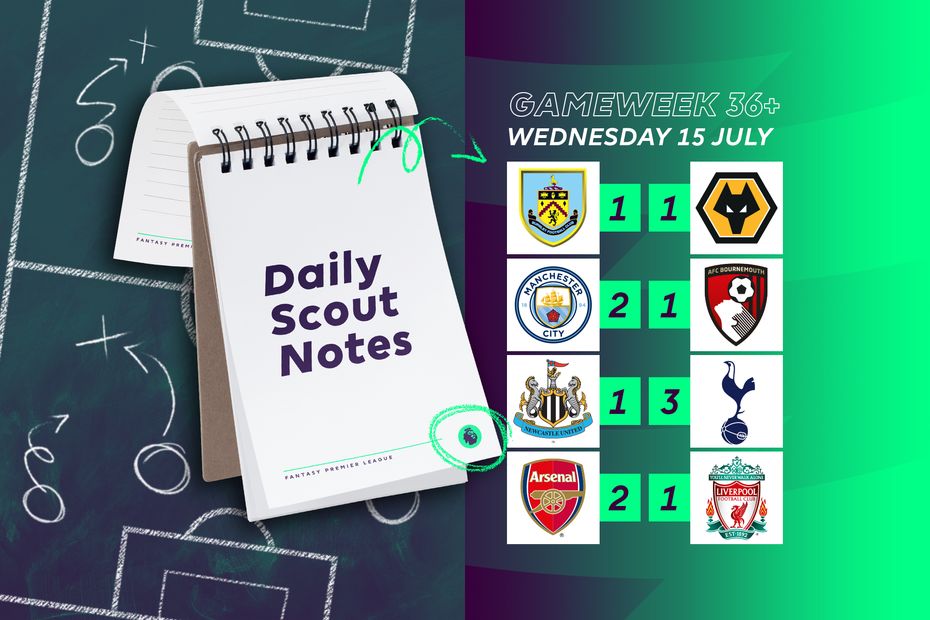 Take a look at the key FPL talking points as managers of Salah, Sterling and De Bruyne have evenings to forget

The Mexican moved up to third in the FPL forward standings after claiming the maximum three bonus points.

Sold by 504,956 managers over the last three Gameweeks, his remaining 31.3 per cent ownership will be confident of more returns against Crystal Palace in Gameweek 37+.

The Eagles have not kept a clean sheet in their last five, conceding 13 goals.

Elsewhere for Wolves, Daniel Podence (£4.9m) was handed a second successive start in the front three.

As a result, Adama Traore (£5.6m) was fielded as the right wing-back, with Matt Doherty (£6.5m) left out of the starting line-up for the first time since Gameweek 20.

Doherty still managed to reward his 12.9 per cent owners, nonetheless, emerging from the bench to provide his seventh assist of the season.

For the Clarets, Chris Wood's (£6.1m) late penalty was his 12th goal of the campaign.

The New Zealander could be a handy differential when Burnley visit Norwich City in Gameweek 37+. The Canaries have conceded 16 goals since the restart, more than any other side.

But his strike partner Jay Rodriguez (£5.7m) could be missing after being forced off with a leg injury.

That could allow Matej Vydra (£5.1m) a rare start at Carrow Road.

The Spaniard scored the opener before supplying an assist for Gabriel Jesus (£9.8m).

Silva has now found the net in each of his last three home outings, totalling 39 points.

Jesus, meanwhile, has scored in three successive Gameweeks for the first time this season.

The Brazilian continues to avoid being rotated by head coach Pep Guardiola, starting each of Man City's last five matches.

However, owners of Kevin De Bruyne (£10.8m) and Raheem Sterling (£11.8m) were left reeling after both were benched against the Cherries.

De Bruyne failed to feature at all, despite Guardiola making five substitutions.

The Belgian has started only two of the last four Gameweeks and his 51.7 per cent owners may now be considering a replacement for the final two matches.

Sterling was the most-bought player in the Gameweek, transferred in by 230,000+ new owners.

Despite being introduced after the break, he produced his first blank at home since Gameweek 23.

Man City now have an FA Cup semi-final against Arsenal, three days before facing Watford in Gameweek 37+, suggesting Guardiola could continue to rotate.

For AFC Bournemouth, Callum Wilson (£7.4m) has provided an assist in each of the last two Gameweeks.

Owned by under 5.0 per cent, he could prove a handy differential at home to Southampton in Gameweek 37+.

The Spurs striker rewarded the 277,440 managers who handed him the armband with a 12-point return, his highest haul since Gameweek 16.

Kane's return to form coincides with a home match against Leicester City in Gameweek 37+.

He has a prolific record against the Foxes, scoring 12 goals in his eight Premier League meetings.

The South Korean has produced attacking returns in four of his last five starts, totalling two goals and three assists.

He has been Spurs' most influential player since Jose Mourinho took charge in Gameweek 13.

When selected, Son has been involved in 48 per cent of their goals under the Portuguese.

For Newcastle, Matt Ritchie (£5.3m) continues to thrive as a major differential in defence.

Owned in only 0.9 per cent of squads, the wing-back has two goals, an assist and two clean sheets since the season restarted.

Indeed, Ritchie has produced 38 points in his five starts from Gameweek 30+ onwards.

A visit to Brighton & Hove Albion in Gameweek 37+ could help him bring in more returns.

The Seagulls have lost four of their last five at home, scoring only three goals.

Mohamed Salah (£12.5m) disappointed the 1.03 million managers who handed him the captaincy, blanking in Liverpool's 2-1 defeat at Arsenal.

The top armband pick for Gameweek 36+, the Egyptian has failed to score or assist in back-to-back matches for the first time since Gameweek 20.

Instead, it was his fellow winger Sadio Mane (£12.2m) who was on the scoresheet, the Senegalese scoring his 17th goal of the season.

In defence, Liverpool now have only a single clean sheet in five Gameweeks.

However, Andrew Robertson (£7.0m) was among the points once again, supplying the assist for Mane's opener.

The Scot has now overtaken Virgil van Dijk (£6.5m) into second place in the FPL defender standings on the back of one goal and three assists in the last six Gameweeks.

Overlooked but in form

For the Gunners, Alexandre Lacazette (£9.2m) extended his run of good form with a goal and an assist.

He has now scored in three of the last four Gameweeks and is a big differential up front, owned in only 1.9 per cent of squads.

Owners of Pierre-Emerick Aubameyang (£10.9m) were left frustrated after he was named on the bench ahead of the Gunners' FA Cup semi-final with Man City on Saturday.

Should Arsenal lose this weekend, however, Aubameyang will surely return to the first XI for their final two Gameweeks against Aston Villa and Watford.