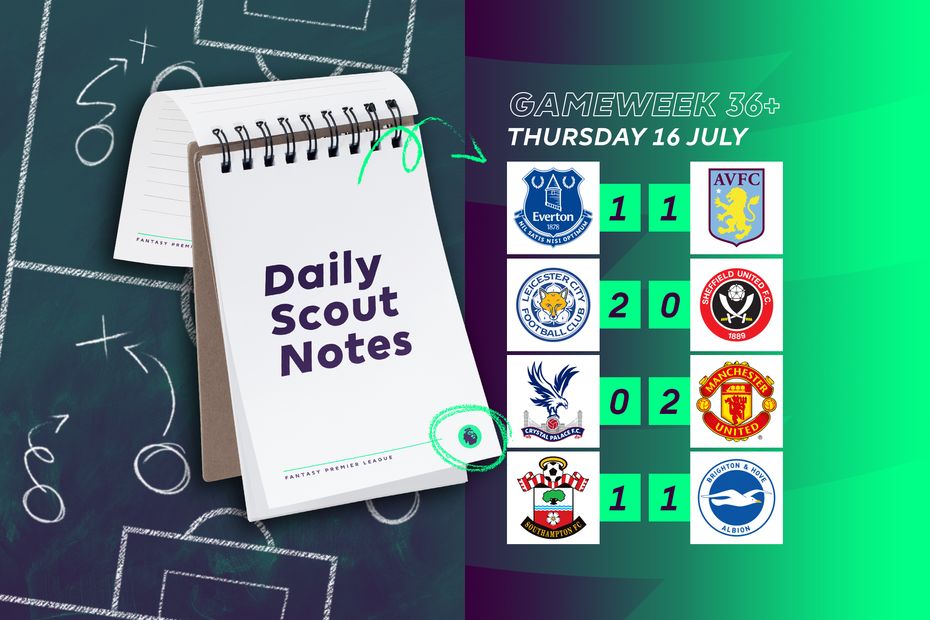 The Scout looks at talking points in FPL as Danny Ings continues his fine form for Southampton and a £4.0m defender shines for Leicester

He set up Ezri Konsa’s (£4.3m) opener, adding to his assist in a 2-0 win over Crystal Palace last weekend.

Both Hourihane and Konsa have emerged as handy differentials over the last two Gameweeks, claiming 13 and 15 points respectively.

Three of Hourihane's five assists for the season have come in the last six Gameweeks.

But it was another evening to forget for Jack Grealish’s (£5.9m) remaining 14.5 per cent ownership, the midfielder recording his 10th successive blank.

Everton’s most popular attackers have also struggled as the season comes to a close.

Richarlison (£8.2m) has just two goals in the last nine Gameweeks, while Dominic Calvert-Lewin (£6.2m) has blanked in each of his last eight outings.

Although the Toffees end the campaign with favourable matches against Sheffield United and AFC Bournemouth, the lack of output from their front two is enough to keep managers from investing.

At the back, Jarrad Branthwaite (£4.0m) could offer a budget-friendly option for those playing their Wildcard or Free Hit chip in the final two Gameweeks.

He has featured off the bench in Everton’s previous two and could now deputise for the injured Mason Holgate (£4.3m) at Bramall Lane.

Jamie Vardy (£9.8m) frustrated the 444,223 managers who handed him the captaincy by managing just an assist in Leicester City’s 2-0 win over Sheffield United.

The Foxes forward was the sixth most-selected captain in the Gameweek on the back of four goals and 29 points in his previous three appearances.

Vardy is three goals ahead of Pierre-Emerick Aubameyang (£10.9m) and Danny Ings (£7.5m) in the race for the Golden Boot.

But he faces a testing pair of matches against Tottenham Hotspur and Manchester United to finish the season.

That favourable schedule could tempt many Vardy owners to switch to the Arsenal striker ahead of Saturday’s 16:30 BST deadline.

The FPL star of Leicester's win was debutant Luke Thomas (£4.0m), who was handed a surprise senior debut at left-back.

The 19-year-old provided an assist, claimed a clean sheet and maximum bonus on the way to 12 points, and could catch the eye of managers looking for a late-season bargain.

In the centre of defence, Wes Morgan (£4.1m) deputised for the suspended Caglar Soyuncu (£4.9m), helping his side to their fourth successive home clean sheet.

Sheff Utd’s schedule is far more encouraging for owners of their key players.

According to the Fixture Difficulty Ratings (FDR), both their matches against Brighton & Hove Albion and Southampton score just two.

Egan has 31 points in the last four Gameweeks, while McBurnie has two goals and an assist in his previous five.

The Red Devils striker scored the opener and supplied the assist for Anthony Martial’s (£8.4m) goal at Selhurst Park.

Both Rashford and Martial have now scored in three of the last four Gameweeks, claiming 27 and 42 points respectively.

The Portuguese has now produced attacking returns in 10 of his 12 appearances since arriving at Old Trafford in January.

Elsewhere for the Red Devils, Mason Greenwood (£4.9m) recovered from an ankle knock to start at Selhurst Park.

But the teenage striker disappointed his 27.0 per cent ownership by recording a second successive blank.

Nonetheless, they will be confident he can bring in more returns against West Ham United and Leicester City in the final two Gameweeks.

At the back, Man Utd have now kept a clean sheet in four of their last six fixtures.

Palace, meanwhile, also have problems of their own at left-back after Patrick van Aanholt (£5.6m) was forced off injured.

Ings moved to within one point of second place among FPL forwards after scoring in Southampton’s 1-1 draw with Brighton.

The striker now has 20 goals for the season, and Saints' final two opponents hand him the chance to get on the scoresheet again.

They face AFC Bournemouth and Sheffield United, who have conceded 20 goals between them in their last six matches.

Ings’ schedule has certainly caught the eye of FPL managers.

He is the most-bought forward in the Gameweek, earning over 26,000 new owners.

For Brighton, a switch to three at the back afforded Tariq Lamptey (£4.1m) the opportunity to play as a wing-back.

He could be a useful enabler for managers still holding their Free Hit chip or Wildcards.

The Seagulls take on Newcastle United and Burnley in their final two matches. Both teams are in the bottom half of the table for goals scored.

In attack, Neal Maupay (£5.7m) returned to the starting XI and scored his 10th goal of the campaign.

Similar to Lamptey, he can be found in fewer than two per cent of squads ahead of Saturday’s 16:30 BST deadline for Gameweek 37+.