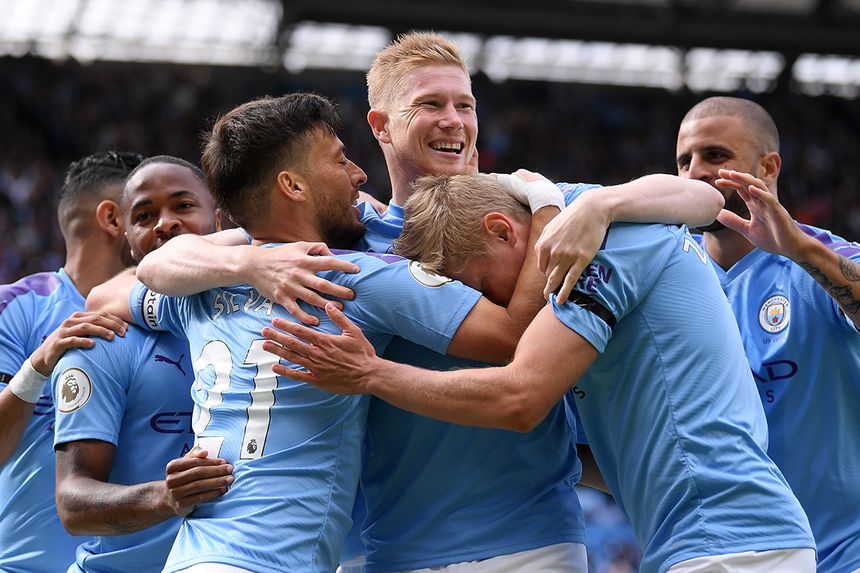 GW4 Dream Team: Richarlison finds his form
Hargreaves: Aguero's the best No 9 in the PL

After four Gameweeks of 2019/20, Manchester City's big-hitters have made a huge impact in Fantasy Premier League.

Sergio Aguero (£12.1m) is the top-scoring player in the game on 40 points, thanks to his six goals and one assist.

The Argentinian is the only player to find the net in each of the first four Gameweeks.

Sterling’s 37 points is more than any FPL midfielder, despite his surprising blank at home to Brighton & Hove Albion.

His underlying statistics offer plenty of encouragement to the 1.8million managers whom Sterling disappointed with the armband in Gameweek 4.

His total of 12 shots inside the penalty area is second only to the 13 of Teemu Pukki (£7.0m) overall.

De Bruyne's opening performances show he is back to his very best.

The Belgian's 36 points is level with Mohamed Salah (£12.5m) thanks to a series of outstanding displays. He has played a part in six goals, scoring once and supplying a further five assists.

The forthcoming schedule only raises the appeal of investing heavily in Pep Guardiola's key players.

Man City play three of the bottom four sides in the next four Gameweeks.

This suggests their defence can also profit in the coming matches.

No side has bettered their two clean sheets in the first four Gameweeks. Their totals of 24 shots conceded and 18 shots in the box conceded are league-leading figures.

Finding the right balance, while also factoring in big-hitters such as Salah, already looks vital to enjoying a successful FPL season.

Paul Gee (FPLPaulGee): After the international break, when Gabriel Jesus (£9.5m) is back and the UEFA Champions League is in full flow, Aguero will get reduced minutes. For this reason I will stick with De Bruyne and Sterling.

Ash FPL Hints (@FPLHints): Judging by the first four Gameweeks, it's clear a Man City triple-up is in order. Defensive cover through Ederson (£6.1m) makes sense, along with De Bruyne and either Sterling or Aguero for the long haul.

Sam Bonfield (@FPLFamily): De Bruyne has been the standout performer of my Fantasy team this season. He has looked promising going forward and has been staying upfield rather than tracking back which, from an FPL point of view, is excellent. At the start of the season my key concern was not having Sterling and, while De Bruyne has covered his points all bar one, it now feels like it's not the case of having one but finding a way to have both.

Lee Bonfield (@FPLFamily): A first blank of the season shouldn't worry Sterling owners. I'm still backing him to be among this season's top FPL scorers. I'm also backing De Bruyne to be right up there for assists as well. He's easily the most creative player in the league right now and has goals and bonus points in his locker, too. The midfield double-up is absolutely on!

Ben Crabtree (@FC_CrabDogg): At the start of the season I thought Aguero was too expensive but his explosive potential makes him a great captaincy option. I'm now considering a triple City attack with Sterling and De Bruyne.

Holly Shand (@FFCommunity_): I'm on Sterling in attack and hoping to bring in at least one of De Bruyne or Aguero on my Wildcard. I may steer clear of the defence with Aymeric Laporte (£6.5m) now injured.

Mark McGettigan (@FPLGeneral): I own Oleksandr Zinchenko (£5.5m), De Bruyne and Sterling and I'm pretty happy to roll with those three. It doesn't bother me too much if Laporte is ruled out, City will still keep plenty of clean sheets. No point worrying about Benjamin Mendy (£5.9m) until we see him on the pitch.

Chuck Booth (@ChuckBoothSport): You can't bet against Aguero. He comes off of the bench, goal. Plays 60 minutes, goal. Plays a full 90, back-to-back braces. Aguero and De Bruyne cover your bases in the City attack well but I wouldn't be opposed to tripling up with Sterling if it were possible to also keep Salah in your team.