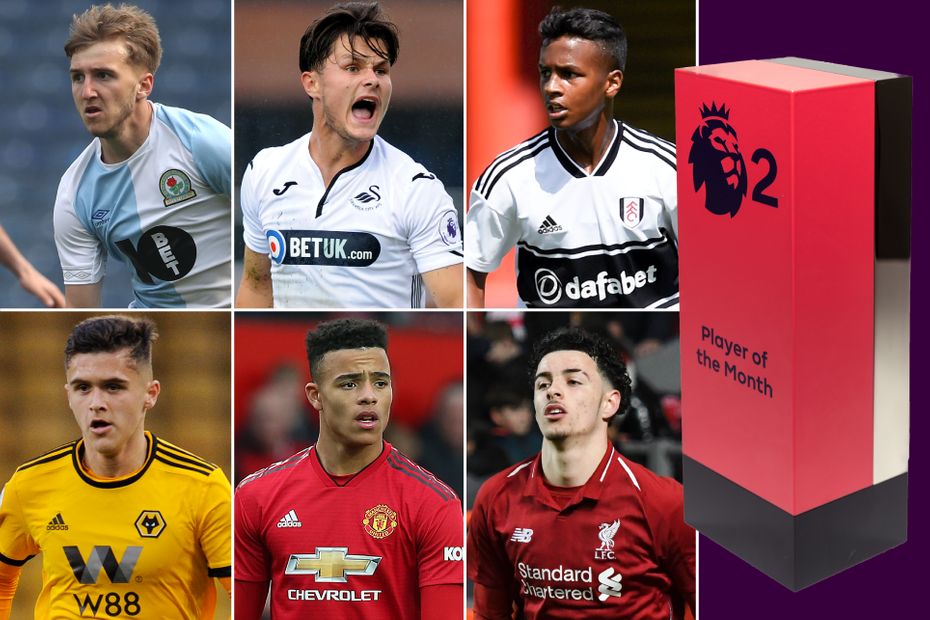 The nominees for April's Premier League 2 Player of the Month award have been revealed, with six players in contention.

The shortlist below was decided by the Premier League’s Football Development Panel after PL2 club managers picked the best performance by an opposing player in each of their league matches in April.

The winner will be announced next week.

The 19-year-old forward helped Blackburn Rovers end their Division 1 campaign with three successive wins. He scored in all three matches, against Tottenham Hotspur, Manchester City and Liverpool, as well as getting two assists. Butterworth also played in the Premier League Cup quarter-final loss at Everton and made a substitute appearance for Rovers' senior side in the Championship.

The 20-year-old Welsh forward starred for Swansea City with two goals in as many Division 1 outings. Cullen scored against Spurs and Man City to take his tally to 10 for the season.

Francois was ever-present in the heart of Fulham's midfield last month. The 18-year-old Australian helped the Cottagers earn four points from three matches to end their Division 2 campaign in 10th. Francois set up his side's goal in a 1-1 draw at Sunderland.

Giles, the only defender on the shortlist, helped Wolves claim the Division 2 title. The 19-year-old wing-back played three times and produced a vital assist as they came from 2-0 down with 10 minutes left to secure a 3-2 win at Manchester United that secured top spot and automatic promotion.

The youngest nominee at 17, Greenwood scored or assisted in all of United's Division 2 matches. The striker got two goals and set up another two in appearances against West Bromwich Albion, Newcastle United and Wolverhampton Wanderers. it earned him a second senior Premier League appearance, coming off the bench against West Ham United on 13 April.

After a wonderful individual effort to complete a turnaround victory over Chelsea, the 18-year-old midfielder scored and assisted in a 6-0 win at Leicester City. That form helped Liverpool finish fourth in Division 1.