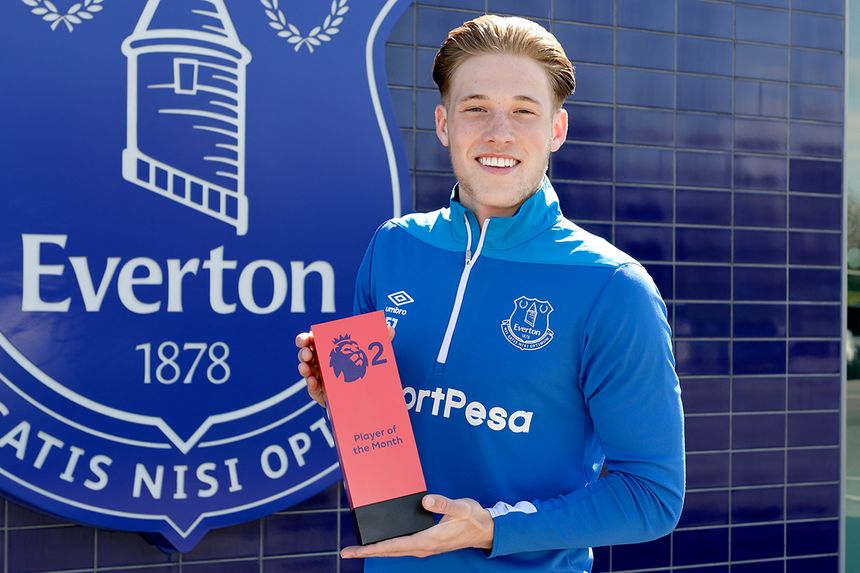 Lewis Gibson says winning the Premier League 2 Player of the Month award for March makes up for a period at the start of the season when he was at the "rock bottom" of his career.

The 18-year-old was injured at the start of 2018/19 and was sidelined until late October but he has since become an integral part of the Everton team who are closing in on the PL2 Division 1 title.

In March, Gibson played every minute in defence as the Toffees kept back-to-back clean sheets, beating Liverpool 2-0 in the Merseyside derby at Anfield before drawing with Arsenal.

"It's a great feeling," Gibson said. "Obviously the start of the season wasn't great for me getting injured - I had an ankle operation in July and then got injured again against Arsenal - and I had to kind of build myself up from being rock bottom. To win the award now at a good time for me, feels good.

"I think the perception when you're outside of football is that when you're injured you do less but it's completely different - you do double the amount of work that you usually do! It's all worth it in the end, though, and you know the work you are doing behind the scenes is going to pay off. Thankfully it has."

'It's what we strive for'

Gibson's performances have helped Everton go three points clear in the race for the Division 1 title and they can win the league for the second time in three years if they beat second-placed Brighton & Hove Albion on Monday, 15 April.

His Under-23 manager, David Unsworth, says coming back from injury and winning the award is testament to Gibson's character.

"To come back from that [injury] and rehab as well as he has done, to get back into the team, stay in the team and then perform consistently over a period of time, it's what we ask for and what we strive for," said Unsworth.

Gibson was selected as the March Player of the Month by the Premier League's Football Development Panel.