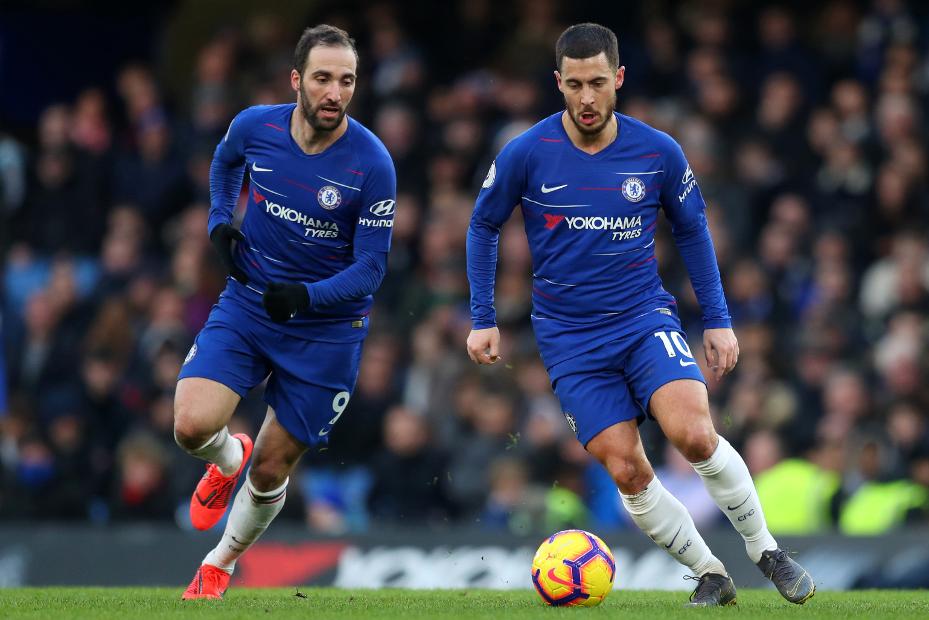 KDB on Chelsea, his return and the title race External Link

Adrian Clarke looks at a key tactical battle in Matchweek 26.

Gonzalo Higuain's impressive home Premier League debut for Chelsea should provide him and his team-mates with confidence ahead of Sunday’s testing trip to Manchester City.

The Argentinian's movement, link play and finishing oozed quality in the 5-0 victory over Huddersfield Town.

However, the standout observation from that match was the manner in which Higuain combined with Eden Hazard.

If this pair build on the chemistry they showed last weekend, they will create problems for Pep Guardiola’s men.

Quality players always like to link up with each other and it was clear from the start that Hazard and Higuain wish to join forces.

In just two matches alongside one another, or 142 minutes of action, Hazard has shared nearly half of the passes with Higuain than he has done with Alvaro Morata and Olivier Giroud all season.

While a dominant home encounter with Huddersfield Town may skew the statistics slightly, these numbers are telling.

Whenever Hazard drives inside from the left, City must try to shield passes into Chelsea’s new centre-forward or ensure they are tight enough to block their route to goal.

These two talents are keen to forge a strong double-act at the top of the pitch.

When Chelsea beat City 2-0 in early December, Hazard was terrific as a "false nine".

Dropping into unusual pockets and drifting wide whenever he wished, the Belgian’s movement made him an elusive man to handle.

The challenge facing the champions this time around will be the very different.

Playing almost exclusively down the spine of the pitch between the width of the penalty boxes, Higuain is a genuine target man who holds his central position.

When Chelsea venture forward at the Etihad Stadium watch out for Hazard driving inside to bounce balls off Higuain or looking to slip him into the penalty area with clever passes.

Midfield runners will also have more encouragement to go forward with Higuain consistently showing for possession.

City will have enormous respect for the quality of Chelsea’s new-look forward line.

Guardiola will know his team cannot allow these two superstars room on the ball inside their half.

Otherwise it will spell danger to their title hopes.