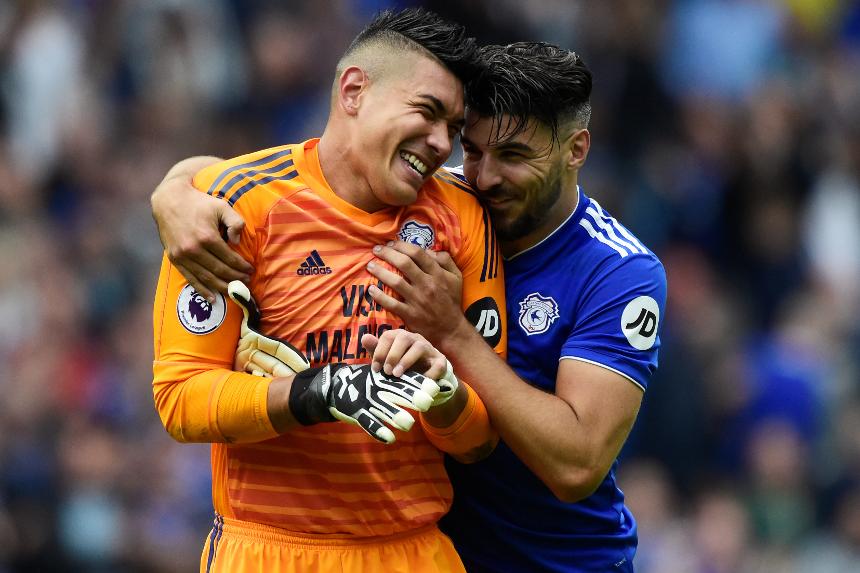 Warnock: I think Cardiff City Stadium can become a fortress External Link
What we learned in Matchweek 2

Neil Etheridge could achieve a Premier League first when he visits Huddersfield Town on Saturday.

The goalkeeper was Cardiff City’s hero on Saturday when he saved Kenedy’s stoppage-time penalty to secure his side’s first point of the campaign.

Having also saved a spot-kick against AFC Bournemouth on opening weekend, should Etheridge repeat the feat at John Smith's Stadium he will become the first player to complete a hat-trick of penalty saves in consecutive PL matches.

Etheridge is already only the second goalkeeper to save a penalty in both of his first two Premier League appearances.

The first was Erik Thorstvedt for Tottenham Hotspur in August 1992, in the opening two matches of the new competition.

The Norwegian had been Spurs' first-team 'keeper so was not making the step up to the top flight, as Etheridge was.

Until last weekend no goalkeeper had saved a penalty in two consecutive PL appearances within the same season since Thomas Sorensen, who did so against Arsenal and Wigan Athletic for Stoke City in December 2009.

Eleven goalkeepers have saved three successive penalties faced in the Premier League. The most recent was AFC Bournemouth's Artur Boruc, two years ago.

'Keepers to save three penalties in a row

The first Filipino to play in the Premier League, Etheridge has suddenly doubled the number of penalties he has saved during his career in English football.

The 28-year-old had previously faced 13 spot-kicks, all of them in his last three seasons in League One and the Championship. He had saved only two of those.