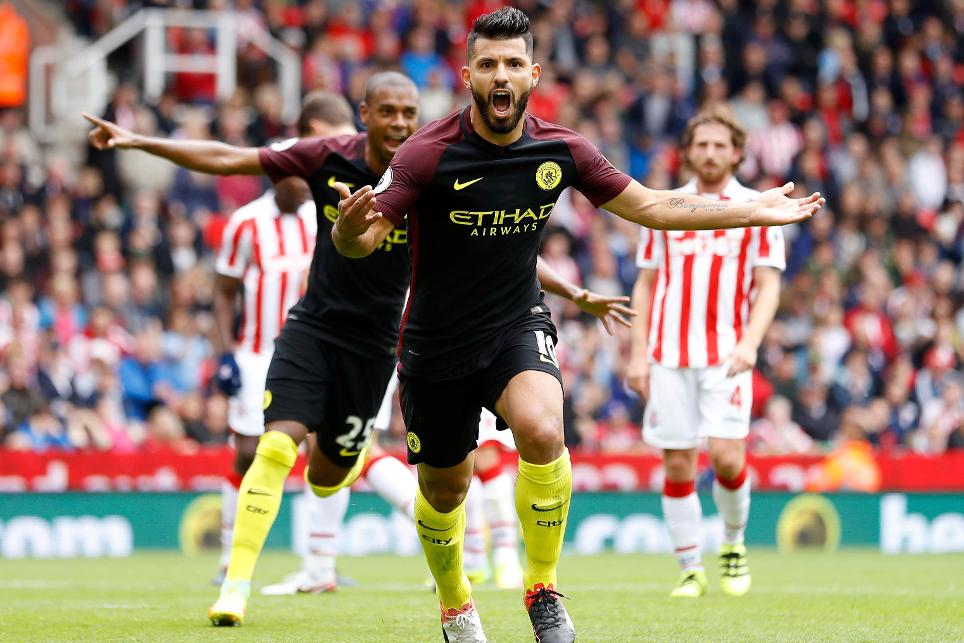 The Argentina striker netted twice in the 4-1 victory with both his goals arriving in the first half, including a penalty kick.

Substitute Nolito (£8.9m) scored twice after the break. Despite playing for just 22 minutes against Mark Hughes’ side, the impact sub collected a BPS score of 37.

Earning a score of 26 in the BPS, Nicolas Otamendi (£6.0m) picked up a single bonus point for his contribution at both ends of the pitch.

The centre-half was awarded the assist for Aguero’s penalty and also registered 11 clearances, blocks and interceptions (CBI), more than any player.

Aguero and Nolito were also the top two performers in the ICT Index.

Ranked first for both Influence and Threat against the Potters, with scores of 77, Aguero was the number one ICT player in Gameweek 2.

The City striker fired four shots, all inside the box, and registered three attempts on target.

Nolito was more clinical. The summer signing converted both of his efforts on goal, with each of his strikes arriving from inside the Stoke penalty area.

The Belgian was first for Creativity, earning a score of 52, thanks to three key passes and an assist. De Bruyne completed 19 passes in the final third and made three successful crosses, more than any team-mate.

Having scored six times in three competitive matches under Pep Guardiola, Aguero has risen in price as Fantasy Premier League managers scramble to acquire him.

The City striker is second only to Zlatan Ibrahimovic (£11.6m) in terms of popularity and now resides in over 50% of FPL squads.

Aguero’s close-range threat looks to have improved this term. He has averaged 4.5 attempts in the box so far, compared to 3.2 in 2015/16.

Dropped to the bench this weekend, Nolito, who produced 25 goals and 20 assists in his final two seasons with Celta Vigo, could return to Guardiola’s starting XI for the Gameweek 3 encounter with West Ham United.

Raheem Sterling (£8.0m) is the only City midfielder to collect attacking returns in each of the opening Gameweeks.

Owned by only 3% of FPL managers, he has provided an assist in both Premier League outings so far and could emerge as a valuable route into Guardiola’s attack.

Aleksandar Kolarov (£6.0m) has started in both opening fixtures. The Serbian played at centre-half in Gameweek 1 before being shifted to left-back at the weekend.

For Stoke, Bojan Krkic (£6.0m) netted their consolation via the penalty spot and looks to have claimed spot-kick duties ahead of team-mate Marko Arnautovic (£7.5m).

That will dent the Austrian’s FPL potential as three of his 11 goals in 2015/16 were converted penalties.