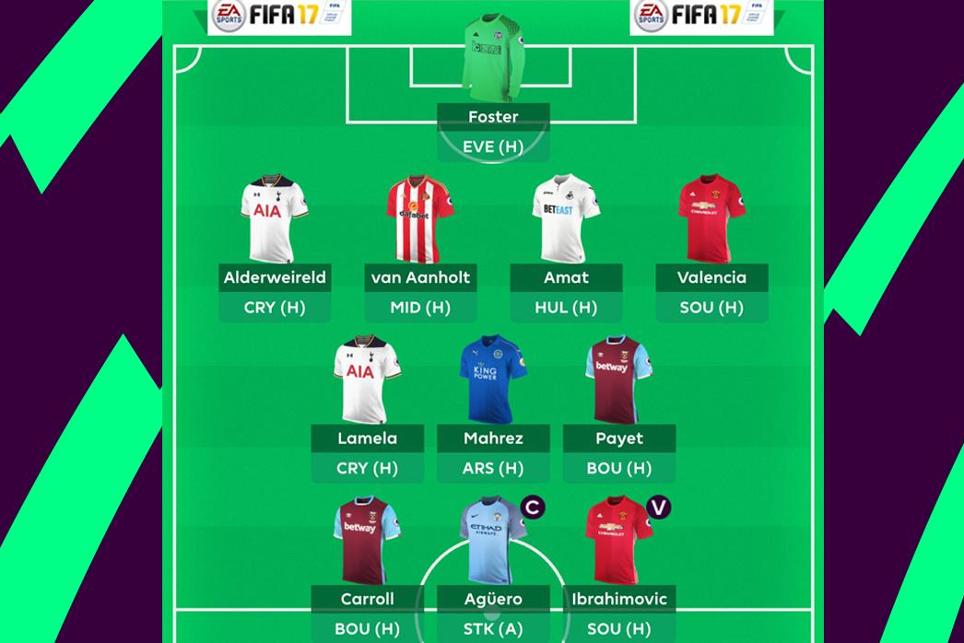 Each Fantasy Premier League Gameweek The Scout rounds off his analysis by selecting a starting XI, compiled with a budget of £83million.

This time around we are shifting our formation to a 4-3-3, but keeping faith with a handful of last weekend's heroes.

Having missed out on Ben Foster’s (£4.6m) 10-point return at Crystal Palace, we have swooped for the West Bromwich Albion shotstopper ahead of their Hawthorns meeting with Everton.

The Toffees will threaten, particularly if former Baggies striker Romelu Lukaku figures for the visitors. Even if we lose our clean sheet, Foster should provide us points from saves.

Attacking threat is again vital to selection in defence.

Only one defender was more of an attacking threat than the Belgian last season: Sunderland’s Patrick van Aanholt (£5.0m) registered six goals and 46 attempts for the Black Cats.

The left-back enjoys Gameweek 2 home comforts against a Middlesbrough side who scored 29 goals in 23 away trips in their promotion season.

Manchester United’s Antonio Valencia (£5.5m) also gets the nod, with his frequent raids down the right offering us potential points at both ends of the pitch against Southampton.

Swansea City’s Jordi Amat (£4.0m) completes the back four. The Spaniard looks certain to retain his starting place at home to Hull City after earning a shut-out at Burnley; given his price, he is an option we cannot overlook.

Mahrez is retained in our midfield. The Leicester City playmaker was confirmed as the designated penalty taker in the defeat at Hull City and will be a concern for an unsettled Arsenal defence.

The France midfielder scored or assisted 38% of the Hammers’ goals in his debut season. His delivery and dead-ball prowess will be a factor against AFC Bournemouth.

Erik Lamela (£7.0m) completes our three-man midfield following his Gameweek 1 goal at Everton. The Argentinian had three efforts on goal at Goodison Park, all from inside the box.

In attack, both Sergio Aguero (£13.0m) and Zlatan Ibrahimovic (£11.5m) are certain picks given their current form; Aguero is again our captain for the trip to Stoke City.

The third striker spot was more contentious but we have gone for West Ham’s Andy Carroll.

Limited to an appearance off the bench in the UEFA Europa League tie with Astra Giurgiu, the towering striker is set to start against AFC Bournemouth and with Payet providing ammunition, we feel his first goal of the campaign is imminent.

Remember to update your Fantasy Premier League team ahead of the Gameweek 2 deadline at 7pm BST Friday 19 August.