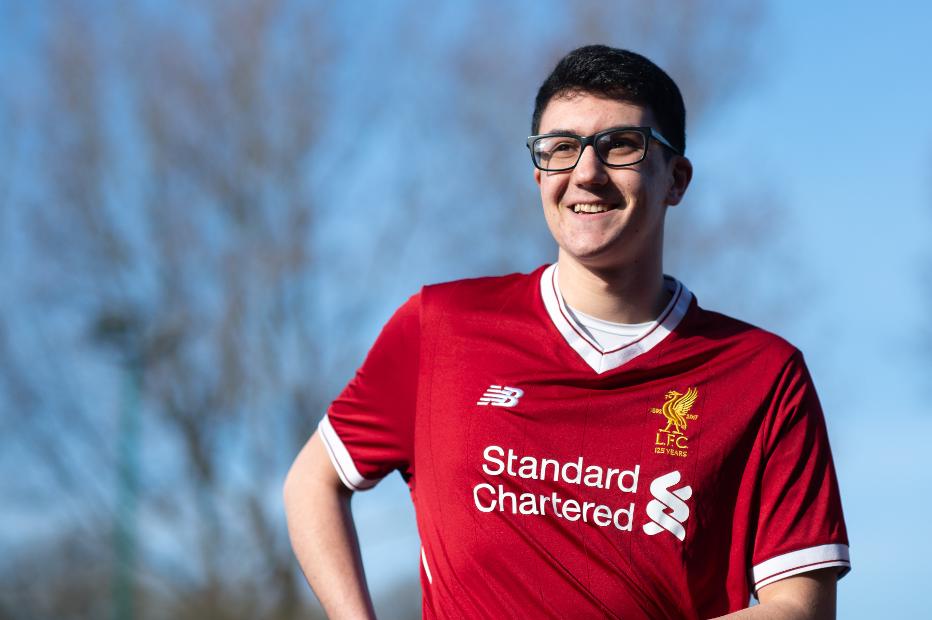 Jordan back enjoying his football with Everton

Joseph, 17, has retinitis pigmentosa, an eye condition that affects his peripheral vision and ability to see in low light.

"It was quite confusing. As a child you don't know until somebody else picks up on it," he says. "I tried my hand at Sunday league football but I was at a bit of a disadvantage.

"When I was in the centre of the pitch, I would struggle to see what was taking place on the side of it without turning my head.

"Things would happen and I wouldn't notice them. It wasn't ideal so I started to get disheartened."

Like a lot of 11-year-olds trying something new, Joseph was understandably nervous when he first went along.

"I wasn't sure what to expect, I wasn't sure about my own skill level at that age," he says. "I thought I was a bit weak, I didn't know if I would get on with anybody, whether I would be too shy."

But he didn't need to worry as the Liverpool Foundation provided the opportunity to play he was looking for.

And with encouragement and support at the weekly coaching sessions, Joseph says he has been allowed to develop as a person and as a footballer.

"I have come a long way in the last six years and it's all thanks to the work of the Liverpool Foundation," he says.

"I have played a few times at Anfield and I wouldn't have had any of these experiences or any of these chances to build my character if it wasn't for them.

"I still encounter small problems but nowhere near as much as I did.

"I used to be quite shy and quiet on the pitch but I am a lot more confident now, a lot more vocal."

Joseph was able to show how he has been helped over the last six years when he took part in a special event to highlight the inclusive work being delivered by Liverpool Foundation and Everton in the Community as part of the Premier League and BT Disability programme.

The event featured players from both clubs and Merseyside Blind FC, as well as special guests Steven Gerrard and Leon Osman, who tried their hand at blind football.

"When I had difficulties in mainstream football, I thought football was out of my reach," says Joe. "I thought, 'I am unable to compete, there's nowhere for me to go, I might as well through in the towel'.

"When your friends are playing for your local Sunday league team and you don't really feel capable of taking part, it's a bad feeling.

"I can't even put into words how thankful I am and how the Foundation have helped me to improve my character and my football.  Without the Foundation I would not be the person I am today."