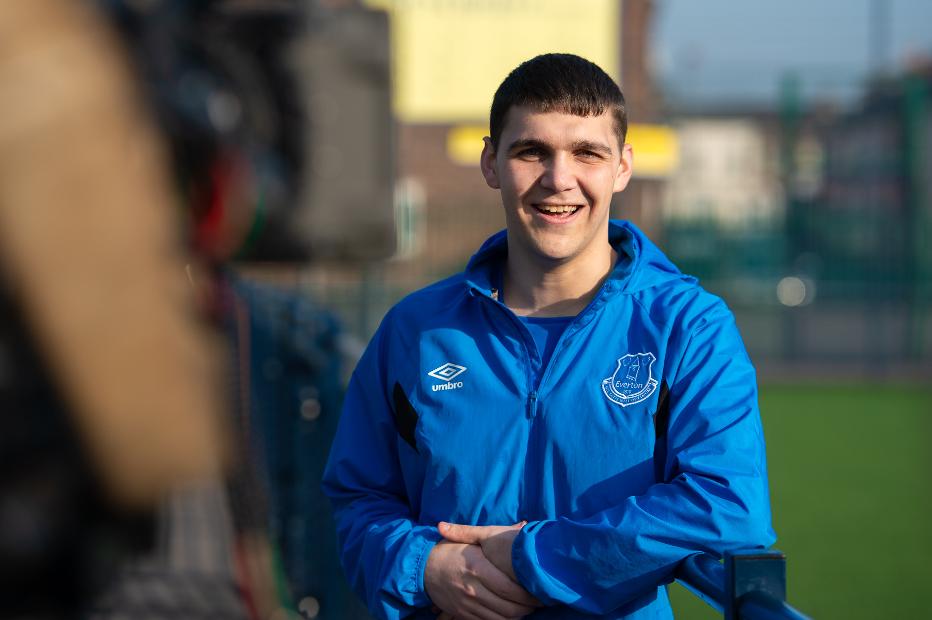 The 23-year-old has always wanted to play football. But when Jordan was four-years-old, he was diagnosed with epilepsy, a condition which has led to him developing a visual impairment.

"I face challenges every day of my life, stuff that people do every day and take for granted like reading the numbers on a bus," he says.

His condition meant that taking part in mainstream football was difficult.

"I would struggle to see a ball in a match," he says. "It was upsetting and disheartening that I couldn't play as I wanted to."

As well as trying to cope with his disability, Jordan also had to handle being bullied at school.

"I played bits and pieces in school, trying to participate but I got bullied, how many fingers am I holding up? Stupid stuff like that," he says. "It wasn't easy."

He was given the chance to start enjoying his football again in 2014 when a friend at college asked him along to a pan-disability football session run by Everton in the Community.

"Beforehand I wasn't really that confident. I was not so much a loner, just more, I kept myself to myself," he says.

"I was slightly hesitant going into a new place but they welcomed me in with open arms. I just slotted in and felt part of a team."

Given the chance to make new friends and play football on a level playing field, Jordan has excelled.

"My parents are really proud of me," he says. "They can't believe the change in me, as I am a completely different person from school.

"My confidence has grown immensely. I am a happy go lucky, loud, confident, comical joker of the team.

"The coaches have been really supportive, even if you have problems at home, they will do what they can to help you, regardless of what it is."

Player of the Year

Jordan is now an integral part of Everton in the Community, which delivers its disability sessions with the help of the Premier League/BT Disability Fund.

"When they called out my name, I just froze," he says. "I couldn't believe it. Appreciation doesn't quite cover it, it was a huge thing for me."

Jordan recently attended a special event to support the work of the PL/BT Disability Fund, which featured Steven Gerrard and Leon Osman trying out blind football at Anfield Sports and Community Centre.

"To see such big idols in football taking part in something like this is incredible," Jordan says. "When I sat at home and watched the likes of Gerrard and Osman playing on the telly I would think, 'I would like to do that but I am not quite able'.

"For them to be a part of what I am playing is pretty special."