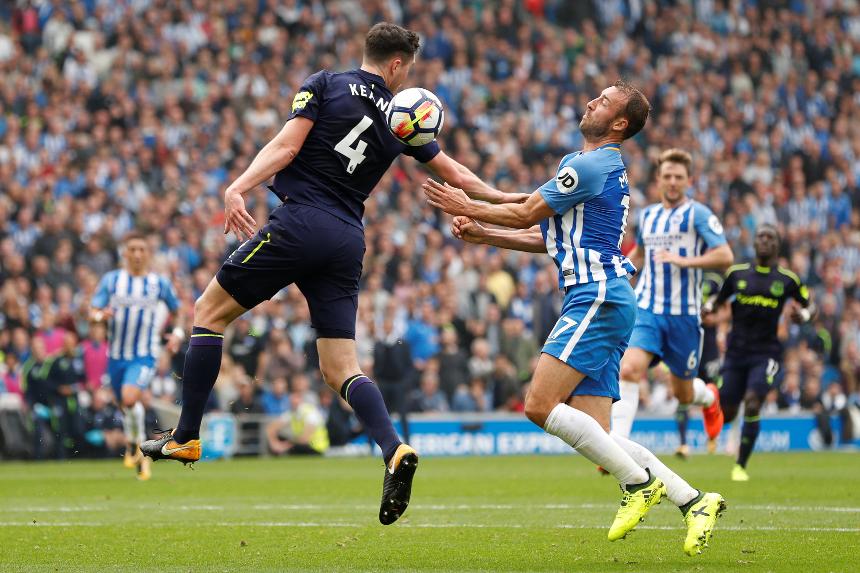 Brighton & Hove Albion have an opportunity to increase their six-point gap on the bottom three when they host Huddersfield Town on Saturday.

Glenn Murray will be central to Chris Hughton’s plans as the Seagulls aim to beat their relegation rivals, who are just three points behind them.

The club’s leading PL scorer, with 11 goals, Murray makes up for a lack of pace with positional instinct.

He is one of the best strikers in the country at drifting into the penalty box unnoticed and evading defenders to attack crosses.

In the home matches against Arsenal, West Ham United, AFC Bournemouth and Southampton, and the trip to Swansea City, Murray got into positions where his nearest marker had their back to him.

When winning penalties against West Ham and Swansea, which he converted, he popped up behind a player who then fouled him.

The 34-year-old is astute at anticipating where crosses will go, and most of his chances arrive from wide areas, including six of his goals.

Four Brighton players have created two or more chances for Murray this term and three are wingers. The other, Pascal Gross, is the team’s best crosser.

When Hughton’s men are running down the flanks this weekend, Huddersfield’s centre-backs would be advised to get tight to Murray.

The Seagulls striker has a cool head and does not snatch at his chances. He has hit the target with 57.5 per cent of his shots.

He has also forced the most saves at Brighton this season, and his 28 per cent chance-conversion rate is creditable too.

Murray’s desire to play on the shoulder of defenders can sometimes backfire.

He has been caught offside on 32 occasions this season, a number only Harry Kane and Jamie Vardy have exceeded, both with 33.

But he has a sixth sense for where the ball will drop inside the box and, once he has a sight of goal, he has the confidence to score with either foot or his head.

Huddersfield Town must be careful not to underestimate or lose sight of Murray at the Amex Stadium on Saturday.

Part 2: How Robertson can outshine Baines in derby
Part 3: Silva and Gundogan show depth of class at Man City