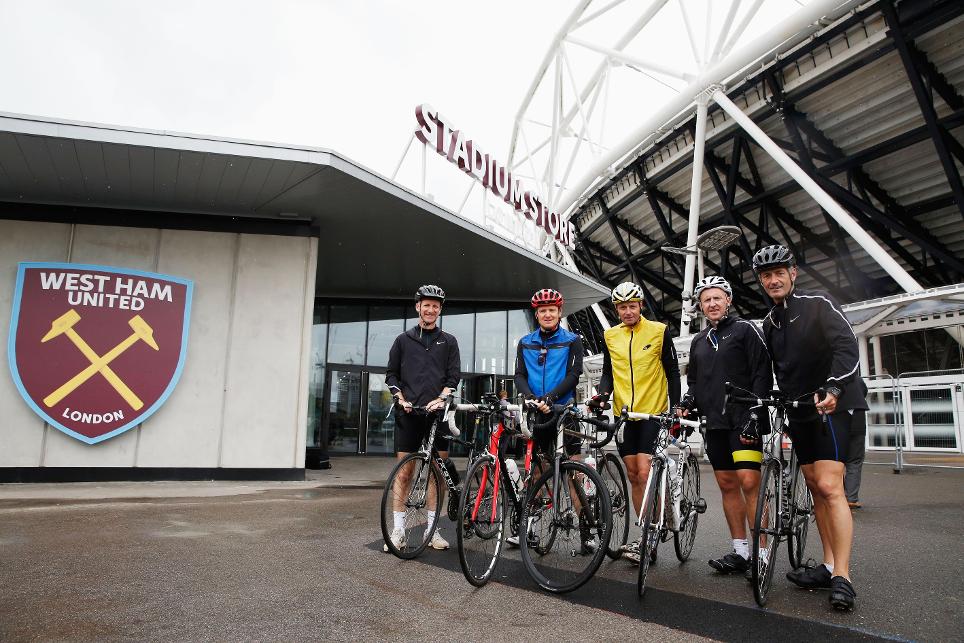 Premier League referees have raised thousands of pounds for charity by cycling between all 20 top-flight clubs in a gruelling 1,000-mile round trek.

Jon Moss and Martin Atkinson were joined by colleagues from the Professional Game Match Officials Limited (PGMOL) to embark on the Whistle Stop Tour, which has raised nearly £20,000 and counting for the Jane Tomlinson Appeal and the Yorkshire Young Achievers Foundation.

And after finally completing the nine-day ordeal at Sunderland's Stadium of Light on Wednesday, the PL referees have reflected on their journey.

Moss, from the comfort of his sofa, said: "My bum is very sore! I feel as though I've been put through the tumble dryer a couple of times - it was knackering.

"It's only now that we can reflect on how gruelling it was because you can't let those feelings creep into your head when you know you've got to get back on to the bike the next day. It's a huge sense of achievement.

"Martin (Atkinson) and I shared a room to save money and every day we'd wake up and it would be an effort to get out of bed. There were times, I've got to be honest, when I felt like getting off the bike.

"The number of hills we went up in Swansea was tough, there's nothing worse when you come round a corner and there's a huge hill facing you. We got to the top of the Brecon Beacons and it was literally just us and a few cows - but it was like being on top of the world."

Moss was also keen to point out the brilliant support of all 20 Premier League clubs throughout the tour.

"They were fantastic," he said. "All the clubs put something out for us in terms of food, hot drinks and hospitality. Middlesbrough had their community team out in force. Manchester United have a stadium tour to students from Beech Hill School who loaned us their mini bus - it was great.

"Clubs have given us merchandise to help us sell things. We've got shirts from Stoke City, Burnley, Manchester City and Manchester United to auction off as well as some signed balls."

With memorabilia still to be auctioned off the PL officials are hoping to reach their £50,000 target and Atkinson explained why the money raised will make such a difference to the two charities.

"The Jane Tomlinson Appeal is a charity that, as a group of referees, we've supported over a number of years," he said. "You can see the work that they do and the effort that goes into it and the benefits from it.

"The Yorkshire Young Achievers, you can see what a difference they make for young people's lives. Last year they funded a specially adapted bicycle for a little girl who had a disability and you could just see that this bike made such a difference.

"For us to go through a few days of pain to raise money for something like that, it's nothing. It's humbling to see what a huge difference it makes."

To donate to the cause, or to read further information about both charities, visit the Whistle Stop Tour's Just Giving Page.