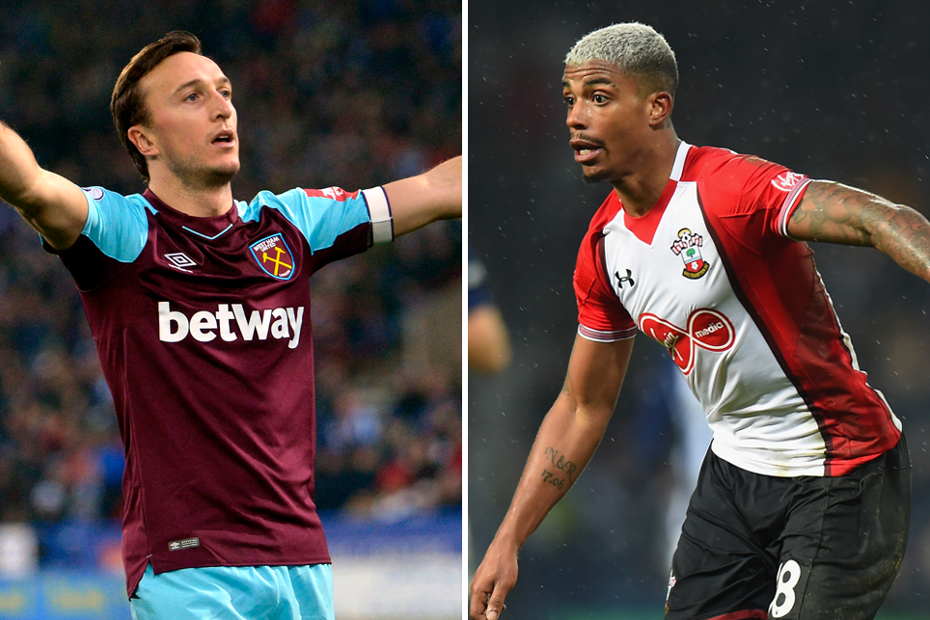 West Ham captain will need to be at the top of his game to stop pacy Southampton midfielder, writes Adrian Clarke

Austin not underestimating West Ham clash External Link
How many points do a team need to stay up?

Gaining control of the midfield in a match is always important. So the battle between Mark Noble and Mario Lemina is one to keep a close eye on in a crucial match between West Ham United and Southampton at London Stadium.

Lemina was outstanding for Saints against Crystal Palace, Manchester United and Newcastle United in three of his first six PL starts.

Since then, the Gabonese has had mixed fortunes.

Dropped by former manager Mauricio Pellegrino, the 24-year-old is now back in favour and can be key for the new man in charge, Mark Hughes, during the run-in.

The statistics tell us that Lemina’s powerful presence in the Southampton midfield has a largely positive effect.

The signing from Juventus has started in four of the club’s five victories in 2017/18. And their win ratio without him is lower than it is when he starts.

Southampton have been good when in possession of the ball in midfield this season, passing with confidence, and Lemina is their best exponent.

His average pass success rate of 88.5 per cent is the highest in the squad.

With Southampton especially strong down that wing, it is important Noble and his team-mates keep possession away from Lemina.

Otherwise it could be a long afternoon for West Ham's right wing-back Pablo Zabaleta, as Lemina is also quick and can travel well with the ball at his feet.

Only three central midfielders in the competition have completed more successful dribbles per 90 minutes than Lemina.

His top speed of 34.2km/h is markedly faster than the 29.9km/h top speed registered by Noble.

So, if Lemina gets the space to embark on a run, he could break the West Ham lines with regularity.

He likes to use his pace inside the middle third, so I expect the Southampton star to try to burst past Noble whenever the opportunity arises.

As West Ham captain, Noble is still an instrumental figure for the club.

Playing with drive, he keeps the ball neatly and his recovery of 155 loose balls is more than anyone in the team this season.

On the ball he is always keen to feed the excellent Manuel Lanzini.

In four of the last five matches they have started together, Noble has picked out more passes to Lanzini than anyone else, at an average of over seven per match. West Ham will want to use that supply line again this weekend.

His match-up against Lemina will test him, but Noble has raised his game in important matches before in 2017/18.

He scored in a wonderful victory at Huddersfield Town, made the most tackles to inspire a turnaround at home to West Bromwich Albion as a half-time substitute, and was inspirational when covering 12.77km in the 1-0 success at home to Chelsea.

David Moyes will need another big performance from Noble against Saints.

Part 2: Change of Everton tactics bringing best out of Tosun
Part 3: Morata the man to bring home goals for Chelsea