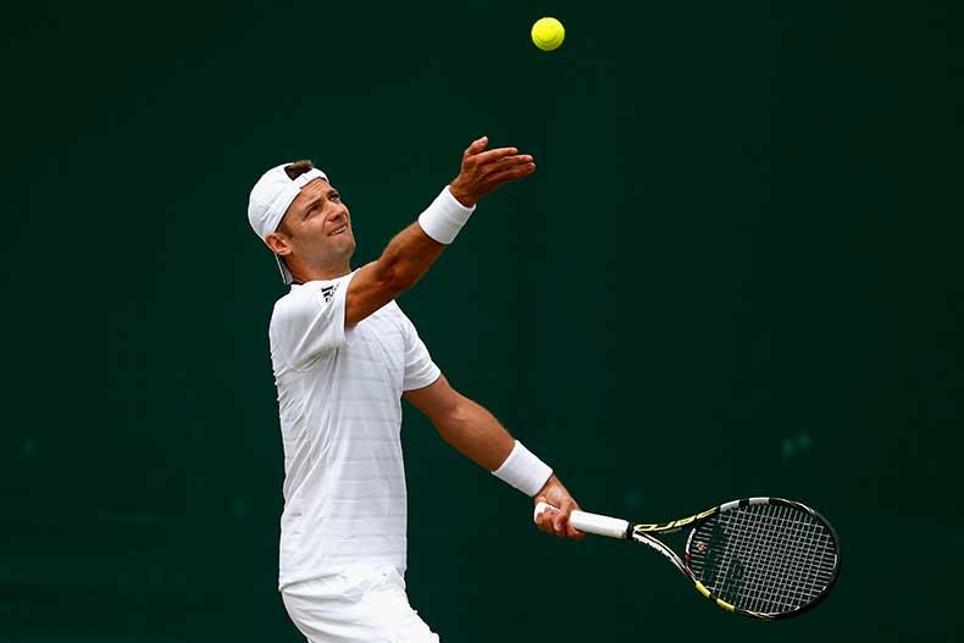 Among the best tennis players in the world who descended on London for the 2015 Wimbledon Championships was Polish doubles player Mariusz Fyrstenberg. This week was an important one for the 35-year-old, not just for the tennis but also because it was the launch of 2015/16 Fantasy Premier League.

For Fyrstenberg, who has won 17 titles as a professional, Fantasy Premier League has become more than a hobby and the skill he has built up while playing on the ATP Tour around the world took him close to the 2014/15 title. In the end, he finished sixth out of more than 3.5million FPL managers, his team 'Defending Champion' falling 43 points short of the overall winner, Simon March.

Premierleague.com caught up with Fyrstenberg, who matched his highest professional doubles ranking of six in the world with his Fantasy Premier League exploits, at Wimbledon. He discussed the popularity of fantasy football on the ATP tour, his route to the Top 10 of FPL managers and some tips to the keys to his success.

Premierleague.com: When did you start playing Fantasy Premier League and why?

Fyrstenberg: "Four years ago. During the Australian Open a Polish friend showed it to me. I entered the mini-leagues. I lost some bet over there but it was great fun!"
What is it that you enjoy about the FPL?

"If you have knowledge you can be ahead of others. It is not based on luck, except for captains' double scores on points. But that's the only thing to make the game unpredictable. If you gain knowledge, spend time on it, watch football and understand it you can be good.

"I take it very seriously. Sometimes I will watch three matches in a row! I didn't watch the Premier League before I started to play the game. But if you're into it you watch it, you start to go to the matches live. You buy merchandise. It's a great thing."

How did you do so well in FPL last season?

"I was lucky at the beginning of the season. I picked very good players. My defence scored, like James Chester from Hull. To keep in the top 50 you cannot get too many minus points for extra transfers. You get tempted to do extra transfers, but everyone else does too and that's why they lose. You need to be careful.

"It also helps to watch matches. For example, QPR's Charlie Austin, when I saw him for the first time and he scored I transferred him in immediately and he produced."

Were there any key performers that made the difference for you?

"Sergio Aguero and Eden Hazard. There was a time I put two Chelsea defenders in and that was good as well. After they managed to win the league I put them on the bench, which was a good move again.

"But the worst was in the last couple of Gameweeks when I invested in three Liverpool players and they did absolutely nothing. It was terrible! Liverpool won only one match in the last four and that ended my dream of winning the title. By the last Gameweek I was no longer near to the winner, but I ended up a few points from second. Liverpool's form let me down."

What were the key factors to your FPL success?

"At the beginning of the season I will do a lot of transfers but when the season is on I will hold off."

Are there any players you have in mind for the new season?

"Harry Kane's going to be a great player and will get better. He's mentally a great guy and wants more and more. I'm planning to invest in him. I hope Theo Walcott will avoid injuries and produce big time. He was my best transfer in the last Gameweek when I put him in for Olivier Giroud and he scored a hat-trick against West Bromwich Albion.

"I'm not going to back the Chelsea defence in the first Gameweeks. Last season they had three clean sheets in the first 10 Gameweeks. So I will hold. I will start with a cheap defence, using the promoted teams because they focus on defence."

How did you fit FPL into your busy schedule on the ATP Tour?

"It is easy because half the players in the locker room play fantasy, all the British, for sure. We have mini-leagues. Andy Murray is a big fan and put me into it as well. So we talk about it in the locker room, that and the Premier League. It's always fun.

"Most of the year we are on tour in the United States, where matches start early in the morning. So I wake up earlier just to see something. But every time we are in London - not Wimbledon because it is off-season - but the ATP Masters at the O2 Arena, we try to take the chance to see a match live.

"Since I won every mini-league last season I am giving trash-talk to everyone. It will probably change, because maybe next season I could finish one millionth, but right now it's my time. Andy Murray, he's the guy who did well last year, but now it's coming back."

What do you use to help your FPL management?

"I use Fantasy Football Scout all the time. Their statistics, the comparison of two players, are crucial. I also read forums that the best managers use for statistics. If you cannot watch the matches it's good to base your team on those insights.

"When I am travelling, I use the app. But the worst thing is when you're on a plane with no internet. You know the matches are live and you cannot do anything. I can't even sleep. It's a sickness!

"Last season wasn't great for me tennis-wise, but for Fantasy it was great. The reporters started to interview me about Fantasy, not about my tennis! A sport magazine had a photo of me but with a football. My family joked to me: Are you a tennis player, or a fantasy player?"