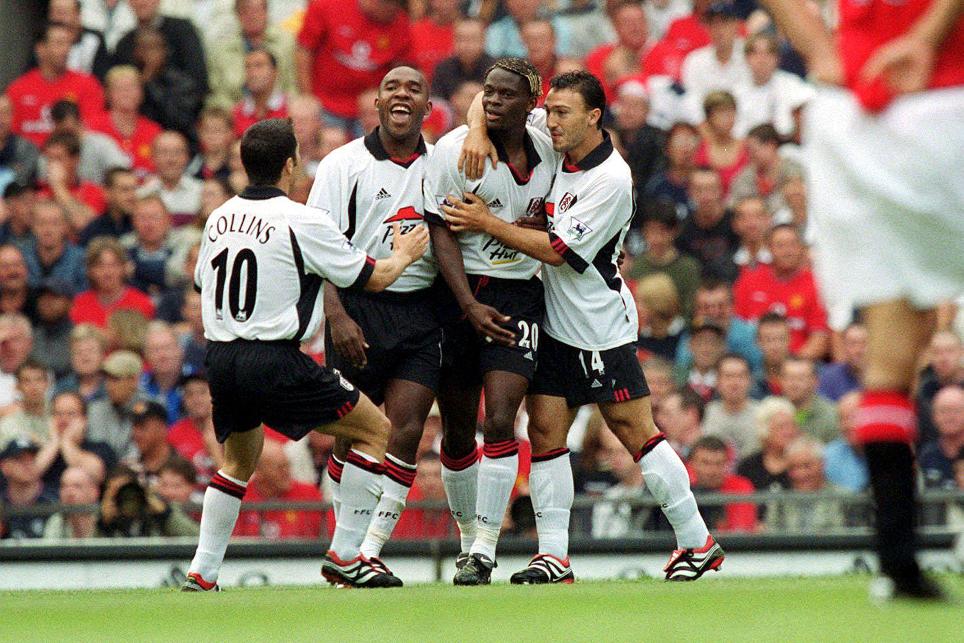 Louis Saha was "a complete centre forward" according to Sean Davis, who played alongside him as Fulham caused a stir in their debut Premier League season in 2001/02.

The France international fired the club to promotion with 32 goals in his first season at Craven Cottage before netting eight times in their first campaign in the PL.

Two of those strikes came as Jean Tigana's side led Manchester United 2-1 on the opening day before eventually losing 3-2. Saha went on to move to Old Trafford in January 2004 after hitting 26 goals in 74 top-flight outings for Fulham.

"He would make a bad ball look good, which he did on the opening day season when I played a long one through!"

Davis said: "He was unbelievable. Every time you gave the ball to him he was a threat. He was quick, he could hold the ball up, left foot, right foot, could score headers. He was a complete centre-forward.

"It was a shame he had his injuries at Man United but he's one of the best strikers I've ever played with. It was such a confidence booster to have him up there because you knew he would always pose a threat.

"He would make a bad ball look good, which he did on the opening day season when I played a long one through! It was a pleasure to play in the side with him."

Davis played in all four tiers of the Football League with Fulham, having joined them in 1995/96 when they were a League Two club, and said the winning habit gained from three promotions in five seasons, culminating in winning the Championship with 101 points, gave the west Londoners the confidence ahead of their PL bow.

"We did so well the season before and football is habit," he added. "When you're winning it becomes a habit and we won so many games the year before we just had that mentality and habit of winning games.

"We had the confidence in the side and we weren't down after the United defeat. We were upset because we lost the game and we thought we should have got something out of it.

“But because of the winners and the mentality we had in the dressing room, and the manager and staff we had, we believed we could stay up in our first season.

"We wanted to finish in the top 10. It was a massive season for the club. First season in the Premier League, it was good to be a part of it.”

With Mohamed Al Fayed as chairman, Fulham made a big impact in the transfer market in the Premier League. One of the most eye-catching signings was Netherlands goalkeeper Edwin van der Sar, previously a UEFA Champions League winner with Ajax, who arrived from Italian giants Juventus.

"It was massive," said Davis. "To have someone like Edwin, who had been there, seen it, played in World Cups, and to watch how he works off the pitch; the way he eats, the way he conducts himself.

"Edwin was a really influential character in the dressing room. Everyone respected him."

Another inspirational figure for midfielder Davis was manager Tigana, a World Cup and UEFA European Championship semi-finalist with France in his playing days.

"His approach was to add quality to the squad and play the type of football that helped us achieve promotion the season before," Davis added. "Don't panic on the ball, play good, quick football. Be hard to beat.

"He always loved us to play. If we lost the ball he wouldn't have a problem with it. He was a fantastic manager, probably one of the best managers I have played under. It was a privilege to play for him.

"He brought in Edwin van der Sar who had done everything in his career, but Jean Tigana was a fantastic player in his own right. He played in the position I played in, which was helpful because he was always guiding me in the right direction and helped me to understand the position and what it meant to play there."

Davis made 30 appearances as Fulham finished 14th in the Premier League that season. The eventual champions were Arsenal, who showed their class by beating the Cottagers home and away during the campaign, and they left a lasting impression on the central midfielder.

"That side was probably the best side I ever played against," he said. "You could name the team now. They had Vieira in the middle, Ljungberg, Pires, Bergkamp, Henry.

"It was very daunting. You want to play against the best players but it was a massive test. Playing just in front of the back four, where you've got Dennis Bergkamp dropping into the whole, Pires coming in off the left, you have to watch Ljungberg off the right.

"It was such a difficult game and they moved the ball so well. They had everything. They had hunger, they had desire, passion to win the ball back and when they got it they were frightening.

"We played them at Highbury too, which was good because I've always wanted to play at Highbury. It was such a fantastic ground and the fans were close. They were probably the hardest team to play against. They did have that fear factor."