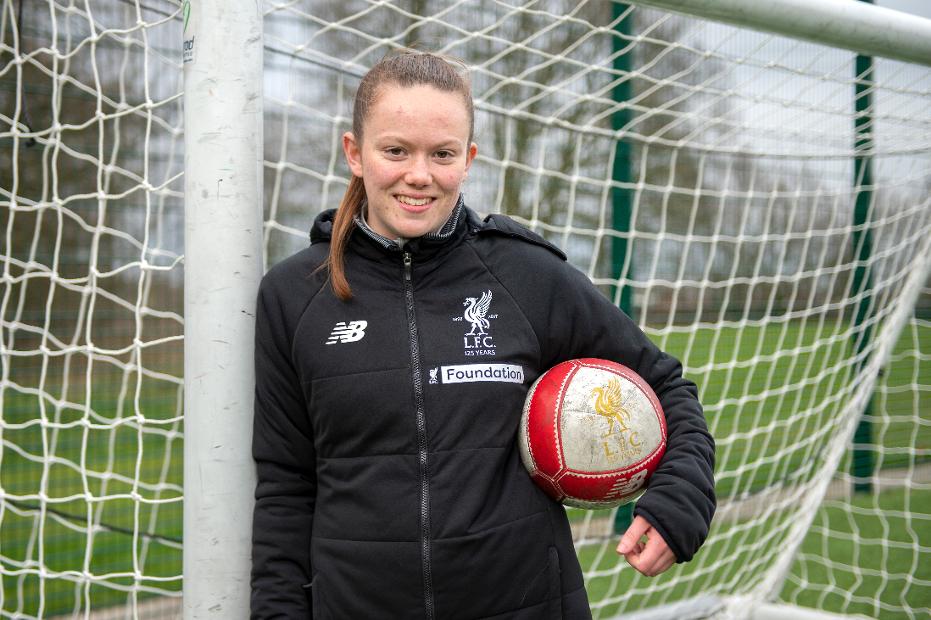 As a huge Liverpool fan Kirsty Rigby was always eager to emulate her heroes on the pitch.

She was a supporter of Liverpool Ladies but the 19-year-old from St Helens had limited opportunities to participate in the game herself.

"I wanted to play but we didn't have a girls' football team in high school," she says. "There was never that support in school to say, 'You can go further.'

"There were three of us girls and we used to ask to play on the astroturf after school while coaches would come and work with 60 boys on the field next to us."

Kirsty was not going to be deterred.

When she found out the Liverpool FC Foundation was running Premier League Girls football sessions in her local area, she went to get involved.

"I was nervous. I'd never played football with girls in that kind of setting before and I didn't know what to expect.

"I'd only ever played football with my dad and watched local teams. I'd never seen a female coach before. I thought, 'I want to be like you.' I loved it and I knew I wanted to do more."

Kirsty soon became a regular participant at the sessions and was encouraged to join her local team, St Helens Town.

"Without the programme, I don't think I would have got into a team and enjoyed it as much as I did.

"But it's not just about playing, they also improve your skills.

"Confidence was the biggest thing I developed through the programme. Without that I probably would have struggled quite a bit.

"They encouraged me and gave me opportunities to just have a go, and not to worry if I got it wrong."

Inspired by Liverpool and their coach, Vicky Jepson, Kirsty is working hard on qualifications that will help her get more girls to take up the game.

She has her FA Level 1 coaching badge and soon will complete her Level 2 course.

Kirsty is also a Level 7 referee – taking charge of some Liverpool Ladies development squad matches at the club's Academy – and is studying sports development and management at university.

"I want to go into a development role where I can help support more girls on a journey like mine. The more girls we can get involved in all aspects of the game, the better.

"That pathway is so important. If I could not have seen anywhere for me to go with that Level 1, I don't think I would have done it."

"I have changed massively over the last three years. Before I started with Liverpool, I don't think I had ever spoken in front of a group of people.

"I was probably the quietest person they have ever had turning up to a session and saying I want to be a coach.

"So to be where I am now, it's just massive. I don't think I would have done it without Vicky and the Liverpool Foundation."

Kirsty is one of 650 females with whom the Liverpool FC Foundation has engaged since its PL Girls football programme started in September 2013.