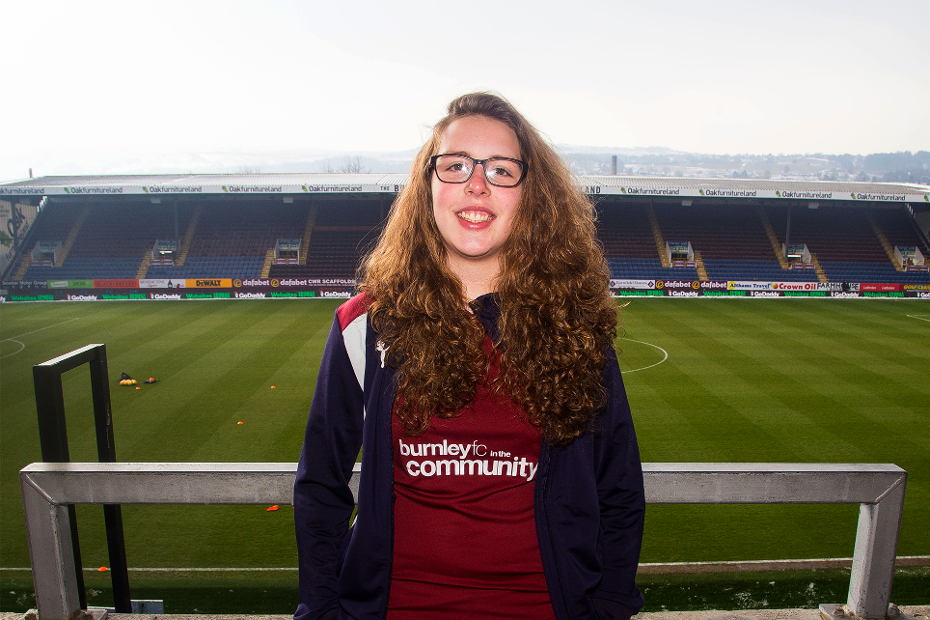 "One of my goals is to get into the first team when I leave college. I could become a coach."

Amber Day has high hopes to succeed at football.

"She has always been really sporty," explains her mum, Jo. "She used to play in a boys' team, she was the only girl in the league."

But four years ago, the 15-year-old's progress was hampered by two operations to correct longstanding issues with her feet.

The surgery meant a long spell on the sidelines for the Burnley fan.

"It had to be done but the recovery was frustrating, it felt like it went on for ever," Amber says.

"I'm used to being up and active, so then to be sat around and having to watch other people do what I loved was not enjoyable."

After more than six months recovering, Amber was eager to get back into the game.

She was encouraged to take part in a Premier League Girls Football session run by Burnley in the Community.

"It was nervewracking," she says. "One of my main concerns was that people might stand on my foot.

"I went straight into a match and just fitted in as best I could. To get back playing was really good, it felt nice just to touch the ball after so long."

With Burnley's support and encouragement, Amber attends about eight hours of sessions a week.

She is also back playing competitively as part of the Burnley Ladies' Under-15 team.

"Burnley make you feel welcome," she says. "It's fun, relaxed. It's just like a second family."

Burnley in the Community has also had an impact on Amber off the pitch.

She has joined the Burnley FC Youth Board, which helps to shape the club and wider town.

She is also part of the Premier League Girls Football Leadership Academy, a programme that challenges young girls to become leaders and role models within the female game.

"It's good to be involved in things like this," she says. "It will help me for when I want to get into college and for my CV.

"Being part of Burnley in the Community has changed me quite a lot. It's opened a lot of doors and has given me confidence.

"One of my goals is to get into the first team when I leave college. I could become a coach.

"I wouldn't have known that I could achieve things like that without Burnley in the Community.

Seeing Amber's development is a source of pride for her mum.

"I thought at one point that she was going to give up football, which would have been tragic because she has always been so enthusiastic about it," Jo says.

"I am really grateful to Burnley. They are contributing to her shaping into a very lovely, confident, assertive young woman."