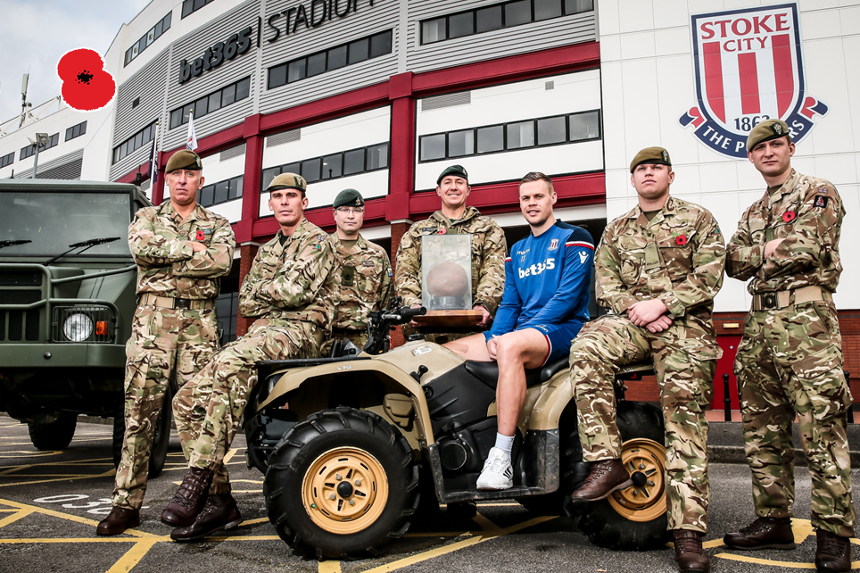 Ahead of Remembrance Sunday on 12 November, Premier League clubs will be paying tribute to the Armed Forces community, past and present, ahead of Matchweek 11's fixtures.

Shirts with poppies will be worn and after the matches they will be signed and put up for auction to raise funds for The Royal British Legion, who is encouraging people to rethink what Remembrance means.

You can register your interest in the auctions for the shirts, at premierleague.com/poppy.

As well as the minute's silences, clubs will conduct special events ahead of kick-offs, including the laying of wreaths.

At Stoke City, before the kick-off against Leicester City in the first match of the day, the Staffordshire Air Cadets and veterans of the Grenadier Guards will form a guard of honour for the players while the last surviving football used by soldiers during the Battle of the Somme will be on display on loan from the National Football Musem.

Just after 7.30 on the morning the battle began in 1916, British Army Capt. William P. Nevill kicked a football into no man's land before he and his comrades went over the top and advanced towards the German lines.

🗣 'Stoke is a big area for recruitment in the armed services, we have a special connection and we will show our respects'#SCFC 🔴⚪️ pic.twitter.com/kxU7ayecAc

At Swansea City, before the teams emerge, the Commando Recruiting Team will conduct an abseil display in the corner of Liberty Stadium before delivering the match ball to members of the Maritime Reserves who will take it to the plinth.

The Premier League and its clubs have been supporting the Royal British Legion since 2012, and has so far raised £1.3 million pounds for the charity since the partnership began.