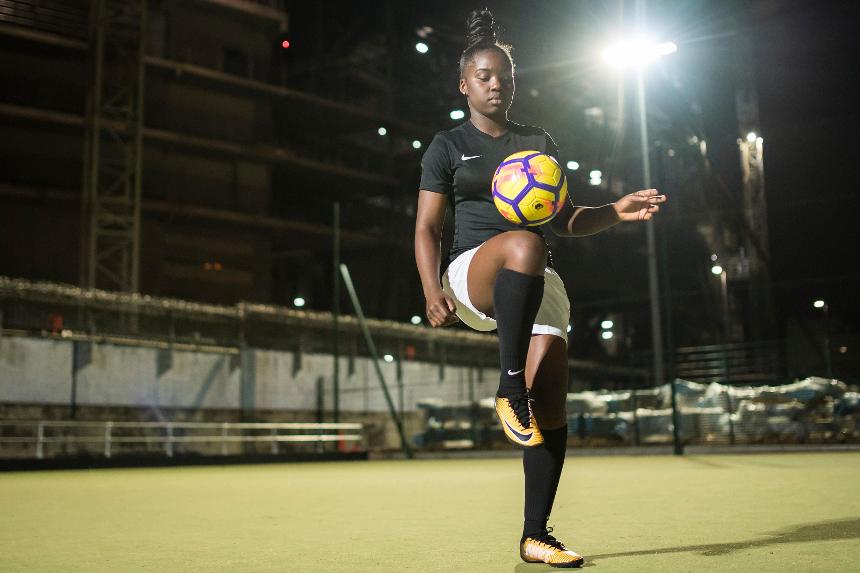 Three years ago, Jessica Mendes and her family came to live in London from Guinea-Bissau in west Africa.

With no English, it was hard for Jessica, then 13, to make friends and settle in her new home.

"I didn't know anyone and I couldn't even say hello," she says. "It was hard to communicate. I was quiet and I would just stay at home."

Jessica was a student at Hornsey School for Girls, in Haringey, and it was there that she was introduced to the work of the Tottenham Hotspur Foundation and Premier League Kicks in 2015.

She attended a PL Kicks session at Duke's Aldridge Academy, in the shadow of Spurs' new stadium and the welcome she received has cast a lasting memory.

At this week's #PLKicks session at @SpursOfficial, participants got a 1st look at the new @nikefootball Ordem V Hi-Vis ball... pic.twitter.com/55GHGrWRGL

"When I turned up, everyone was friendly and all the coaches were great," she says. "Everyone at PL Kicks pushed me.

"Back then I used to think, 'Jessica you are rubbish, why are you here?' But I was told that I looked like a footballer so just go for it."

Jessica has been with PL Kicks ever since and the encouragement she received from the coaches and fellow participants has made a significant impact.

"PL Kicks has done a lot for me," she says. "It has improved my confidence. Before I would think that I couldn't do anything but now I can do what I want to do.

"It helped me learn English and make friends. I can now talk to anyone. I want to show people that I can do something; Kicks has helped me do that."

Now 16, Jessica is busy laying foundations for the future.

She is working towards a BTEC in Sports qualification through the Foundation's college programme while later this month, she has a trial with the Spurs Ladies Under-16 team.

"Instead of coming home on Fridays and doing nothing, I come to Kicks, I play football. I enjoy myself," she says. "It's given me the opportunity to develop.

"For me, Kicks means that a dream has come true. I started coming to the programme and my life has changed."

Jessica is one of 7,300 people who have been engaged by Tottenham Hotspur Foundation's PL Kicks programme over the last 11 years.