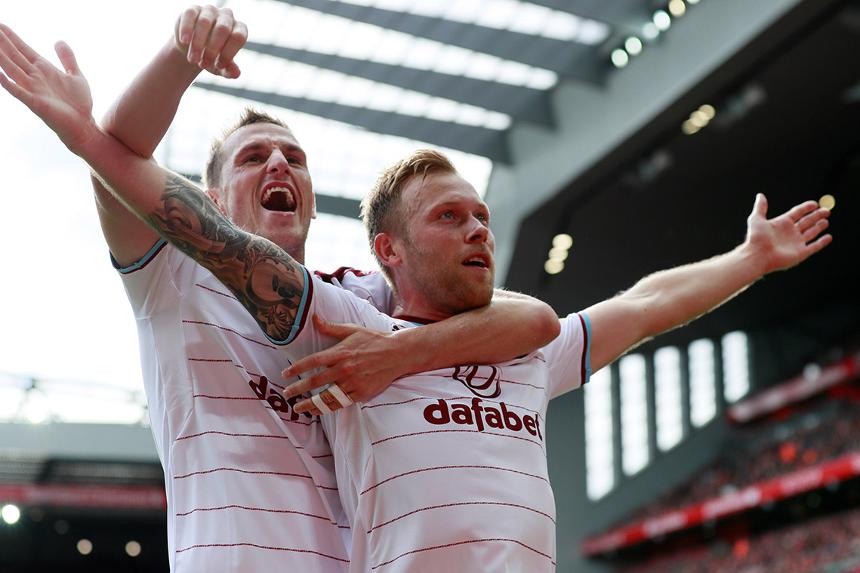 Summer signings have mixed with regulars to help the Clarets go from strength to strength, writes Adrian Clarke

How Brighton can find their scoring touch

Having earned the opportunity to feature in their second Premier League campaign in succession, Burnley are showing signs that they are evolving as a team, Adrian Clarke writes.

Burnley are at home to Huddersfield Town on Saturday but the clearest indication of how they have changed this season is in their approach to difficult away matches.

Aside from pulling off a goalless draw at Old Trafford last term, the Clarets lost on the road to every other club who finished 13th or above.

Sean Dyche’s persistence with a 4-4-2 or a 4-4-1-1 that included a recognised striker playing just behind the main forward failed to have the desired effect on Burnley’s travels.

This season Dyche no longer starts with two natural forwards away, reverting to a compact and straightforward 4-5-1.

At Chelsea on the opening weekend, Jeff Hendrick was the most advanced midfielder supporting the striker, and since, at Tottenham Hotspur and Liverpool, winger Scott Arfield (pictured above right with Chris Wood) has been brought in to fill that role.

Running on to a loose ball on the edge of the box, Arfield scored at Anfield last weekend.

The presence of a mobile, hardworking attacking midfielder who drops in to harass the opposing defensive midfielder has worked well. It has added stability in a key area of the pitch.

Having beaten Burnley at home last season, Chelsea, Spurs and Liverpool all struggled to find their flow this time as Dyche’s men returned five points from those fixtures.

There are other differences between this season’s Burnley and the 2016/17 team, most notably the influence of the new regulars.

James Tarkowski has stepped in for the departed Michael Keane at centre-back and done an outstanding job, clearing the ball fabulously well and making a PL-high goal-saving blocks alongside Ben Mee.

The arrival of Jack Cork from Swansea City this summer has added athleticism and defensive nous.

Cork’s willingness to drop in and provide cover, often throwing his body on the line, has been a feature of the season and helped increase Burnley's resilience.

Since beating Chelsea in Matchweek 1, Burnley have not conceded more than one goal in a PL match.

Two attacking players have also made a tremendously positive impression.

Robbie Brady has finally nailed down a regular spot as a winger in the side, while striker Chris Wood has hit the ground running since joining from Leeds United in August.

Wood has scored with two of his first five shots in a Burnley shirt.

Away from home the New Zealander can lead the line on his own by offering a physical presence, and he is a threat with runs in behind.

Last season, when Andre Gray was up front, the side sometimes missed a focal point of that nature.

Brady is by some distance the team’s most creative presence.

Showing great accuracy from set-pieces, and the ability to whip in more crosses than any team-mate from open play, he has leaped from a peripheral figure to a leading man.

It is early days and there are many more obstacles to overcome, but Burnley’s alterations for 2017/18 appear to have genuinely improved their prospects of staying up.

Part 1: How Brighton can find their scoring touch
Part 3: Why Arsenal may target Gibbs against West Brom