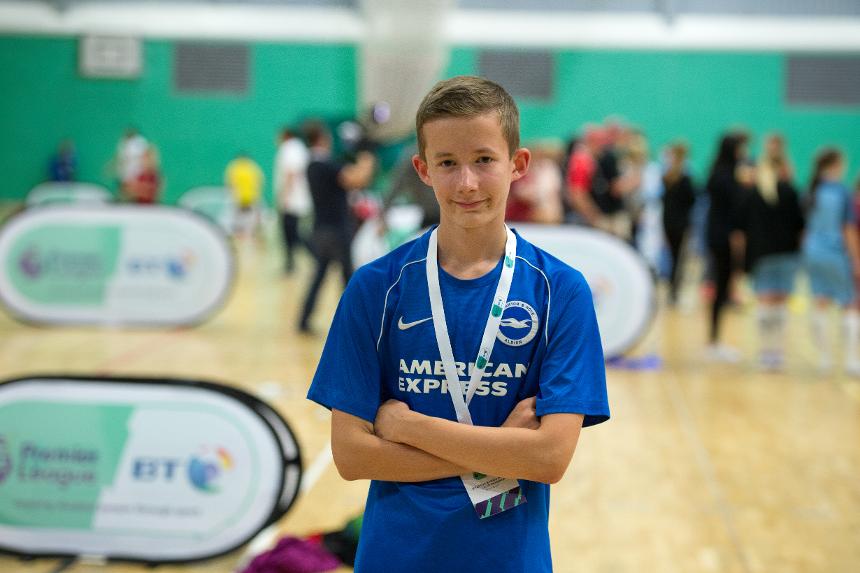 Since September, clubs across England and Wales have been delivering the new Premier League and BT Disability programme - engaging over 10,000 disabled people in the last 11 months.

One of the newest clubs to join the scheme is Albion in the Community, the official charity of Brighton & Hove Albion.

Visually impaired footballer Jacob has been with the club for the last three years.

"There's a company in Brighton called the Blatchington Court Trust and they sent my mum an email about disability football, so I went for a trial for the talent centre," says the 12-year-old.

"The first session was in a sports hall. It was futsal and it was just about being introduced to all the players. I was a little bit nervous but once I got into it my nerves went away.

"Usually at Albion they have a brighter ball and bibs on the posts, whereas in grassroots football you don't have that.

"It's helped me in that way, to see the ball, but it's also helped me to think about more aspects of my game."

Jacob feels he has now developed, both as a player and as a person.

"I play for a grassroots team as well as Albion and I play better," he says. "I've got more games for my team and I've scored a couple more.

"Football-wise it means almost everything. It's taught me how to play properly.

"I wasn't a very confident person before I got involved with Albion in the Community but it's boosted my confidence a lot.

"I usually play with people around my own age - 12 or 13. But because these are pan-disability sessions I’ve played with 16 and 17-year-olds now and it’s helped me progress more. I probably wouldn't have been able to do that before.

"It's made me more confident in myself, and believe more. I hope to keep going with Albion."

To mark the successful first year of the Premier League/BT Disability Sport initiative, participants from each of the clubs involved gathered together earlier this month for a Festival of Sport.

Jacob was chosen to represent his club at Stoke Mandeville Stadium.

"It's amazing. I didn't think I'd ever do that in my life," he says. "My mum actually booked it without me knowing so I didn't really know but it was pretty special to me.

"It's nice to meet other people who have a disability so you know you're not the only one out there."

Albion in the Community will now be able to make an impact on more people like Jacob in the years ahead as they join the PL/BT Disability Sport programme.

"It's a massive thing for us," said disability manager Paul Brackley. "We've been delivering disability football 20 years and it's the first time we've really had this kind of opportunity.

"To be mixing it in the Premier League and the possibilities that this funding will give to us in terms of some new clubs, driving our standards even higher and bringing new staff in - it's a massive opportunity."