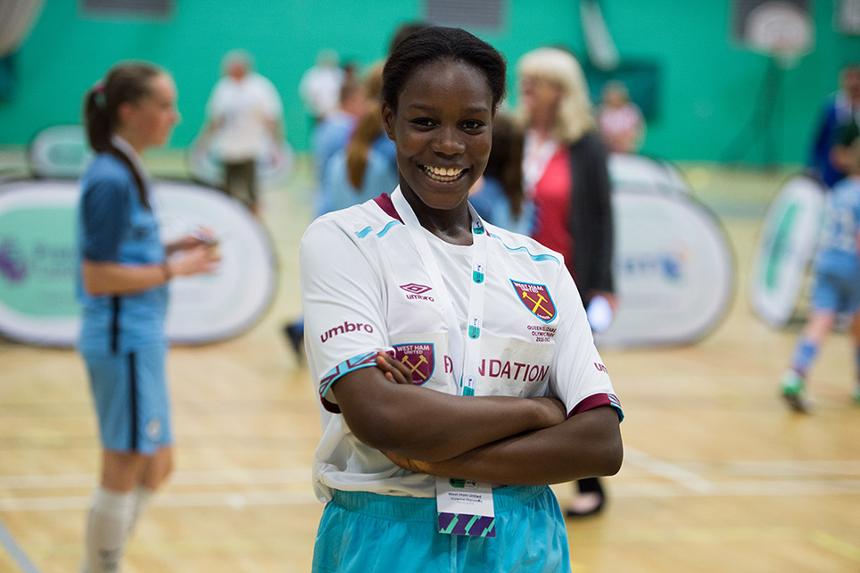 For Vivienne, a passion for sports was undermined by shyness and a fear of criticism or mockery if she underperformed.

But, having played football, cricket and rounders at primary school, the 13-year-old decided to develop her skills.

She signed up for the West Ham United Foundation's disability initiative, which is part of the Premier League and BT Disability Fund.

Since the national project was launched at London Stadium last September, the 22 clubs involved have engaged more than 10,000 disabled people, 27% of them being female.

Vivienne, who has learning difficulties, feels she has benefitted greatly and now has more self-belief, both when she is competing and when she is meeting new people.

"It boosted my confidence, so I feel proud of any score I get," she says. "I know I've tried my hardest and my best.

"I was nervous before the first session because I didn't know anybody except my best friend Melissa.

"But the nerves went quite quickly because I was with her and I was trying my hardest to improve and learn people's names.

"Sometimes I need help talking to people so I go to different clubs and get to know people. I'm learning to start conversations. The coaches give me encouragement and advice too.

"There will always be a football session at the end, but we’ve learned different kinds of sports. It's helped me improve when we play games. The coaching’s really fun.

"In the future I want to be a PE teacher or a singer/dancer."

To mark the successful first year of the PL/BT Disability Sport initiative, participants from each of the clubs involved gathered together earlier this month for a Festival of Sport at the Stoke Mandeville Stadium.

"I carried on being part of the Friday football club so they decided to pick me," she says. "I never thought I’d improve so much that I would be here. It means I’ve made a big improvement with my sports.”

"She plays for the school football team and the inclusive team that we run at West Ham," he says. "She plays with general boys so she's one of the best we’ve got.

"Her friendship group has grown massively. She used to have one friend, Melissa. Now she's friends with all the kids that attend the session.

"You've seen a development in her, from being quite shy and not talking to many people to pretty much bossing loads of the boys about.

"It’s just nice for her to have her fun [at the Festival of Sport] and be recognised for what she's achieved over this last year.

"A lot of the mainstream kids at school saw our team putting the West Ham kits on. They were saying ‘I want that, I want to go’, so it’s a massive thing for them.

"It all shows them they haven’t got any limitations. They can do whatever they want."