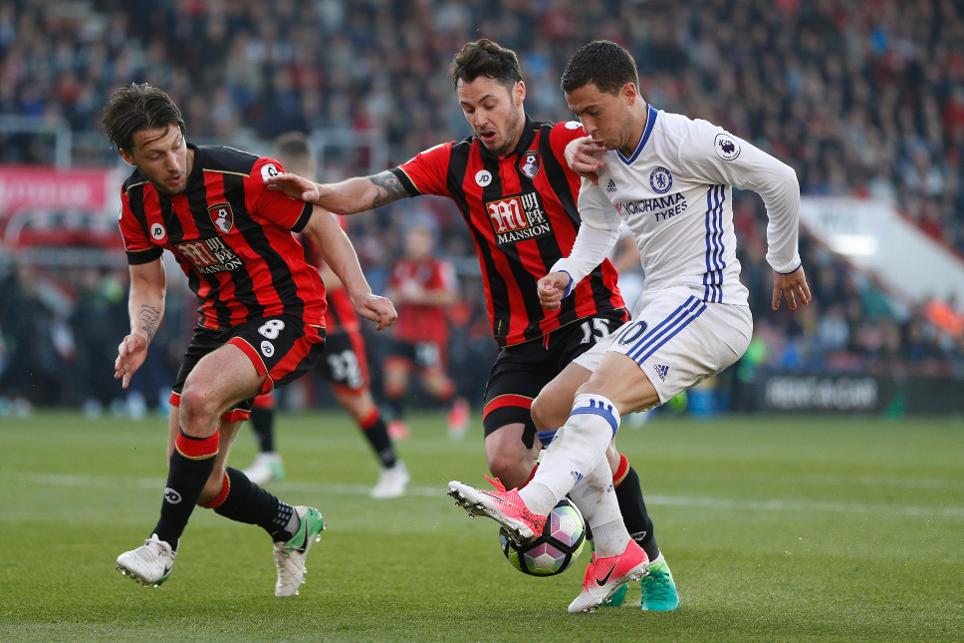 A fourth goal in as many Gameweeks earned the Belgian 36 in the Bonus Points System (BPS), while Hazard also completed 94% of his 47 passes.

Returning to a role in Chelsea's back three, the Spaniard completed 93% of his 65 passes.

With the highest Creativity score (64) in Gameweek 32, Hazard topped the ICT Index at Vitality Stadium.

Completing 28 successful passes in the attacking third, the playmaker laid on five chances.

Despite failing to find the net, Chelsea's Diego Costa (£10.5m) registered the highest Threat score (47), having fired four shots on goal, three from inside the area.

Brought in by more than 94,000 ahead of Gameweek 32, Hazard repaid his new investors with a double-figure return, his ninth of the campaign and a third in four starts.

While Hazard's form is flourishing, Costa continues to struggle to provide goals and has now fired just two in nine Gameweeks.

Having lost 103,000 FPL owners ahead of Saturday's contest, more than 23,000 have moved him out since, making Costa the most-sold forward ahead of a Gameweek 33 trip to Manchester United.

SCOUT: No clean sheet in 9 for Alonso but, having hit the bar with 2 free-kicks this season, he scores - 5th of the season & 1st since GW24 pic.twitter.com/U5LnHdEVL4

Marcos Alonso's (£6.8m) fortunes appear to be heading in the opposite direction.

Following a run of eight matches without a clean sheet, the defender had lost 23,000 in ownership over the last two Gameweeks.

Chelsea conceded for a ninth successive fixture on Saturday, but the Spaniard's free-kick provided him with a fifth goal of the campaign.

Alonso is now the top-scoring FPL defender on 143 points and is also ranked first for points per match with 5.3.

He has provided 10 goals in his last 11 Gameweek outings and, while he may struggle against the Tottenham Hotspur defence in Gameweek 33, his fixtures to follow encourage investment.

Middlesbrough, Stoke City and Burnley are all due to visit the south coast over the final five Gameweeks.