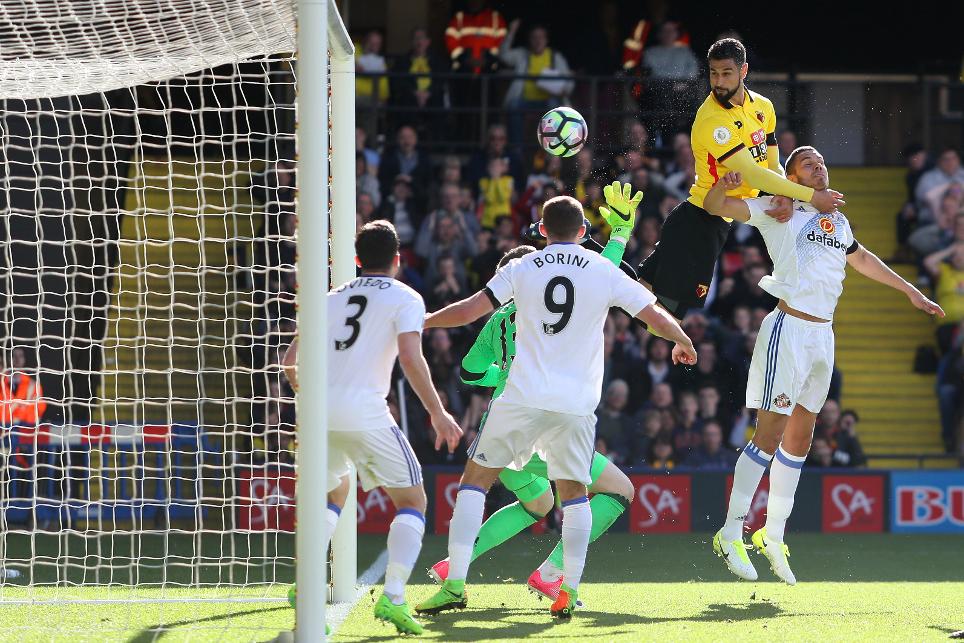 Mazzarri | “We have 27 points to play for” External Link

After nine clean sheets across the weekend there are five defenders in the Gameweek 30 Fantasy Premier League Dream Team, forming a rare 5-4-1 set-up.

Two Watford defenders made the cut after combining for their winning goal in a 1-0 victory over Sunderland while, after returning three successive shutouts, it was the turn of the Crystal Palace attack to shine.

A pair of Eagles attackers earned call-ups after inspiring a fourth consecutive win, prompting FPL managers into early investment ahead of their double Gameweek 34.

The Boro goalkeeper earns a third Dream Team call-up thanks to a clean sheet, a save point and three bonus points in the goalless draw with Swansea City. That 10-point haul promotes Valdes' stock for a kind run of fixtures, which includes two matches in Gameweek 34.

A goal, clean sheet and maximum bonus points in the win over Sunderland helped the Uruguayan to 15 points – the joint-highest tally in Gameweek 30. A new threat from set-pieces, Britos has produced a goal and two assists from his last seven starts.

How many of them did you have? pic.twitter.com/2DSsfZb7vE

The second Watford defender in the Gameweek XI, Cathcart makes his maiden Dream Team bow courtesy of a clean sheet and assist for Britos’ winner at Vicarage Road – his first returns in defence or attack this season.

Another Dream Team debutant, the Foxes defender also accrued 15 points via two assists, a clean sheet and maximum bonus in a 2-0 win over Stoke City.

Mustafi scored his second goal of 2016/17 in a 2-2 draw with Manchester City and also returned an assist and three bonus points. With Laurent Koscielny (£6.2m) sidelined, Arsenal clean sheets may be tougher to come by but Mustafi could yet emerge as a target ahead of 10 fixtures in the final eight Gameweeks.

The Italian registered his first goal since arriving on loan from Inter Milan in January to secure three points against West Ham United. Ranocchia’s average of 3.6 points per match is more than any other Hull City defender.

A goal and assist in the 3-1 derby victory over Everton steered Coutinho to a first double-figure score since Gameweek 11, and a third Dream Team call-up. The 13-point haul, combined with the knee injury suffered by Sadio Mane (£9.5m), has established the playmaker as the top transfer target ahead of tonight’s 6.45pm BST Gameweek 31 deadline. More than 161,000 managers have acquired Coutinho for an Anfield meeting with AFC Bournemouth.

Pushed into midfield as Spurs chased victory at Burnley, Dier's first goal of 2016/17 in a 2-0 win earns him a first Dream Team call-up. Classified as a midfielder, Dier has barely been a factor this season, having predominantly played as part of the three-man defence favoured by manager Mauricio Pochettino.

The January signing scored a spectacular first Premier League goal against Stoke City to secure a fourth successive Foxes victory. Owned by just 0.5% managers, the midfielder has now produced a goal and two assists over the last three Gameweeks, and since making his debut, no other Leicester City player has registered more shots than Ndidi’s 18.

A superb performance from the Crystal Palace winger, which included a goal and an assist, inspired Sam Allardyce’s side to a shock 2-1 victory at Stamford Bridge. Zaha’s 11 points was rewarded with a third Dream Team appearance and prompted a surge in FPL ownership. With two matches in Gameweek 34, more than 93,000 FPL managers have already swooped for the Ivory Coast international.

Working so effectively in tandem with Zaha in Saturday's victory, Benteke claims a place alongside his team-mate in the Dream Team, having also provided a goal and assist. The strike at Chelsea was only the Belgian’s second goal in his last 14 starts, reviving FPL interest ahead of the Eagles’ approaching double Gameweek.