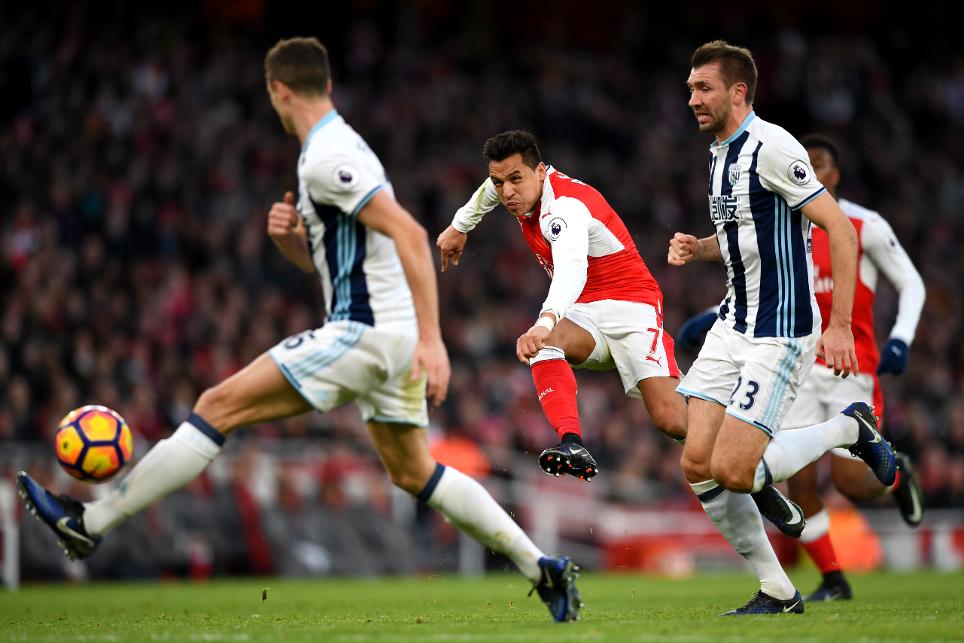 Wenger: Why West Brom are so effective External Link

Alexis Sanchez (£11.5m) is back among the main captaincy contenders for Gameweek 29 ahead of Arsenal's trip to West Bromwich Albion.

The Chilean remains the top-scoring player in Fantasy Premier League despite missing two of the last three Gameweeks due to fixture postponements.

Sanchez has been an explosive asset away from home. He has scored 11 of his 17 goals on his travels, producing six double-figure returns.

These ✌️ featured heavily in this morning's press conference

West Brom, meanwhile, have managed only two clean sheets from their previous 16 Gameweeks.

But a home encounter with Hull City ensures that Romelu Lukaku (£10.3m) remains the favourite for the armband.

Backed by 17% of FPL managers in Gameweek 28, Lukaku produced a goal and assist against West Brom and has scored in each of his last five Goodison Park matches.

Acquired by 108,000+ FPL managers ahead of Saturday's 11.30am GMT deadline, Lukaku faces a Hull City side who boast the joint-worst away defence in the Premier League, conceding 31 times on their travels.

Alli has registered 10 goals and two assists over the previous 11 Gameweeks and has scored in three successive home outings across all competitions.

Eriksen, meanwhile, has hit five double-digit tallies in the last eight in front of his own supporters.

But Son Heung-min (£6.8m) could profit from Kane’s absence to start up front.

The South Korean produced three goals and an assist in the weekend FA Cup win over Millwall having shifted to the striker's role and, during Kane's previous absence from Gameweeks 6-10, he was Spurs' leading FPL asset with 26 points.

Diego Costa (£10.6m) has been the most popular transfer target this week, claiming 152,000+ new owners ahead of Chelsea's trip to Stoke City.

But the Blues forward has managed only one double-figure haul since Gameweek 7 and has scored twice in his last six road trips.

The Potters, meanwhile, have been harder to score against at the bet365 Stadium, conceding only two goals in their previous five home matches.

Sergio Aguero (£12.7m) has scored twice in two of his last three home matches in all competitions as Manchester City host Liverpool at the Etihad Stadium.

Encouragingly for his 21.6% FPL owners, the Argentinian has netted in all four Premier League home appearances against the Merseysiders during his career.

Subject to more than 123,000 transfers in after a hat-trick against West Ham United, King has netted eight times in his last seven Premier League outings.

With a goal or assist in eight of nine Gameweek appearances under head coach Paul Clement, Sigurdsson looks the likeliest to undo a defence that has conceded at least twice in all but one of their previous nine home matches.

A home encounter with Burnley also looks promising for the prospects of Jermain Defoe (£7.7m).

Sunderland’s top scorer has been directly involved in 17 of his side's 24 Premier League goals this term and faces a Clarets defence that has faced more shots (287) than any other away team.