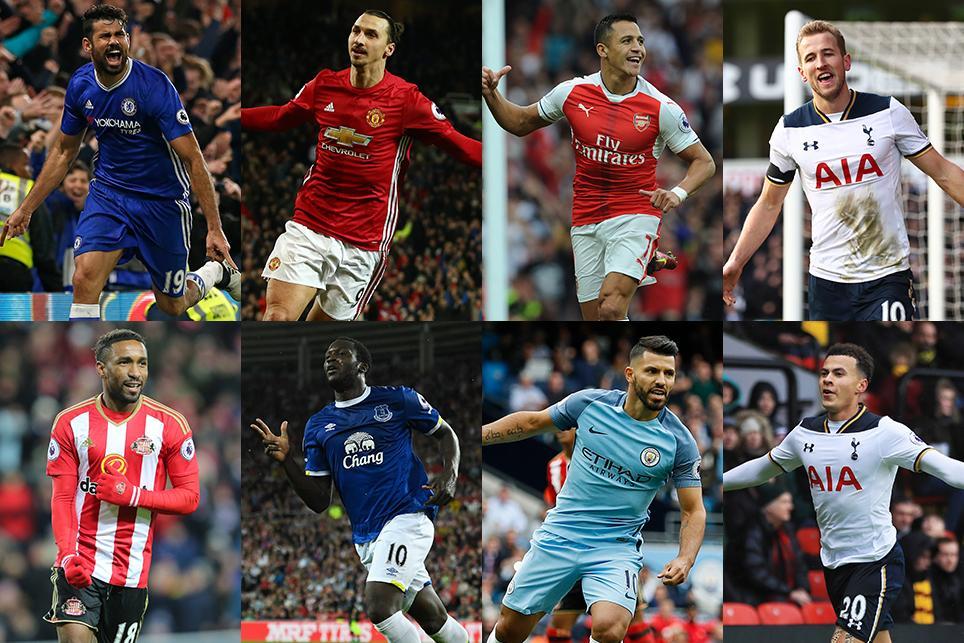 The race for the Premier League Golden Boot is set to be the most competitive in 20 years with a record number of players on course to score more than 20 goals this season.

After 22 matches, three players share the lead in the scorers' charts: Chelsea's Diego Costa, Manchester United's Zlatan Ibrahimovic and Alexis Sanchez of Arsenal, each on 14 goals.

Tottenham Hotspur's Harry Kane has netted 13, while Sunderland's Jermain Defoe and Romelu Lukaku, of Everton, have 12 goals each.

If these six continue scoring at their current rate they will each exceed 20 goals by the season's end.

This could be the first time as many as six players have reached the 20-goal mark in one season since 1994/95, when the Premier League was a 42-match competition.

Not in the top six but likely to feature in the final reckoning, Manchester City striker Sergio Aguero who has scored 11 goals in 15 matches, meaning he is well placed to hit the 20-goal mark.

Only in three seasons of the Premier League have five or more players managed more than 20 goals in a single campaign.

The closest finish for the top goalscorer award took place in back-to-back seasons when three players shared the Golden Boot in 1997/98 (Dion Dublin, Michael Owen and Chris Sutton with 18 goals) and the next season when Owen, Jimmy-Floyd Hasselbaink and Dwight Yorke matched that tally.

In 1997/98 the top eight goalscorers were separated by three goals and this season could be a similarly competitive finish as Spurs midfielder Dele Alli, who has scored 10 goals, has hit a rich vein of scoring form, finding the net seven times in his last five PL matches.