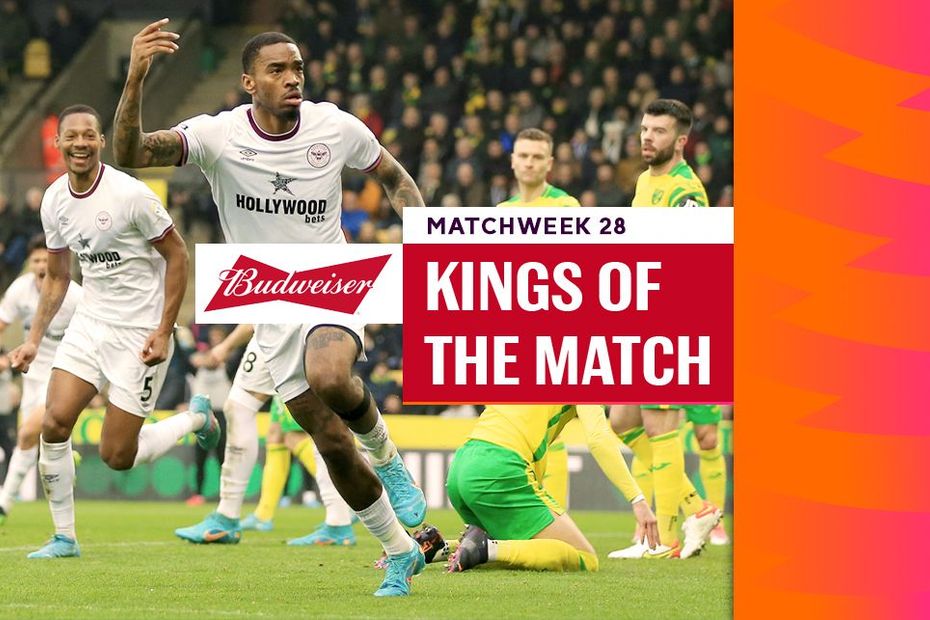 See which players have earned the backing of supporters, including Brentford's Ivan Toney

After the final whistles in Matchweek 28 of 2021/22, thousands of supporters have voted to crown their Budweiser Kings of the Match.

He made several excellent saves to deny Leeds United and keep a second successive clean sheet.

With a goal and an assist, the Brazilian was outstanding and secured a massive 78 per cent of the vote.

Scoring a great goal to put Chelsea ahead before creating another, the wing-back was a key figure at Turf Moor.

The winger scored Newcastle United's first goal and assisted the other as the hosts claimed a fifth win in six matches.

Scoring his first Premier League hat-trick made the striker the overwhelming favourite, winning almost 80 per cent of the vote.

The striker put Crystal Palace ahead and remained a threat throughout, narrowly beating Wolverhampton Wanderers goalkeeper Jose Sa to the award.

The Liverpool right-back laid on the assist for Sadio Mane's winner and made a crucial goalline clearance at the other end. He polled almost three-quarters of the vote.

The winger was a constant threat, setting up Martin Odegaard's opener before producing a superb finish to score himself.

Two goals and an assist earned the Belgian 67.9 per cent of the vote, leaving team-mate Riyad Mahrez in second.

Two goals crowned an inspired display by the striker and earned him an overwhelming 71.7 per cent of the vote.