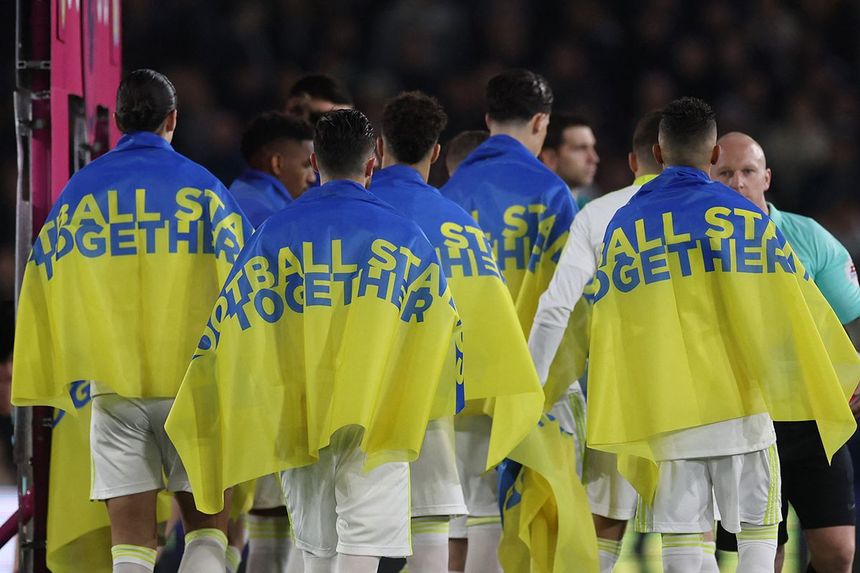 All Premier League matches featured shows of solidarity for Ukraine

Albion's show of support for peace in Ukraine External Link

At every fixture this Matchweek the Premier League and our clubs showed their support for the people of Ukraine suffering from Russia's actions.

At Leicester, ahead of the match with Leeds United, fans were able to donate money or aid for the people of Ukraine.

Before all the weekend's matches, fans joined players, managers, match officials and club staff in a moment of reflection and solidarity.

Brighton & Hove Albion wore their yellow-and-blue third kit at Newcastle United on Saturday and say that profits from the sales of the shirt will be donated to the British Red Cross Ukraine Crisis Appeal.

Big screens at stadiums displayed "Football Stands Together" against the backdrop of the blue and yellow colours of the Ukrainian flag.

Words of support were also shown on LED perimeter boards during matches to be broadcast to a global audience.

At Villa Park, travelling Southampton fans were provided with scarves in the colours of the Ukrainian flag.

We stand with Ukraine 💛💙

Fans also showed their support and opposition to the conflict as a result of Russia's actions.

Ahead of the Manchester derby both teams wore warm-up T-shirts calling for an end to the conflict.

At the Tottenham Hotspur Stadium, young people from local secondary schools and colleges sang a song of peace.

Prior to kick-off, young people from Haringey Vox performed ‘One Day’ - a song expressing hope that one day our world will stop fighting and embrace kindness and freedom. 💙💛 pic.twitter.com/5VGyUvpRGY

Fans who purchased match programmes at Elland Road on Thursday contributed directly to raising money for those suffering from the invasion of Ukraine.

📘 A special #LUFC programme will go on sale tonight, with proceeds donated to the Ukraine Humanitarian Appeal

Leeds players took to the field draped in the Ukraine flag in a show of unity.

A young Wolves fan expresses his support for Ukraine at Molineux ahead of the match against Watford.

A Norwich fan shows her support by wearing a face mask in the colours of the Ukraine flag.