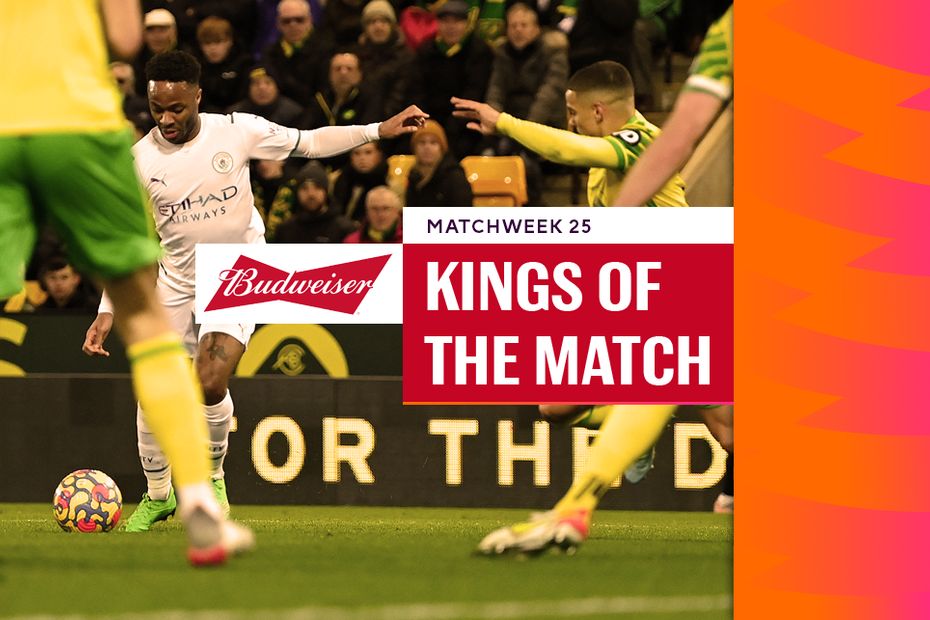 See which players have earned the backing of supporters, including Man City's Raheem Sterling

After the final whistles in Matchweek 25 of 2021/22, thousands of supporters have voted to crown their Budweiser Kings of the Match.

The Spaniard won the vote after making several excellent saves as Manchester United picked up a point.

The Brentford captain stood up well to the threat of Crystal Palace and edged out Eagles defender Joachim Andersen to claim the award.

It was an impressive performance from the 20-year-old, who created the second goal and added the final one for Everton.

The Frenchman broke the deadlock with a superb strike from a difficult bouncing ball and claimed two-thirds of the fans' votes.

Sterling scored his fifth Premier League hat-trick as Manchester City brushed Norwich City aside to make it 15 matches without defeat.

The Brazilian goalkeeper made five saves to claim his 12th clean sheet of the season and beat compatriot Fabinho to the prize.

A second free-kick goal in as many matches earned the right-back almost half of the votes.

The Wolverhampton Wanderers midfielder scored his first Premier League goal of the season and fought off team-mates Jose Sa and Raul Jimenez to take the award.

The winger produced another influential display with a goal and an assist, earning an overwhelming 82.2 per cent of the votes.

The Portuguese striker was back on the scoresheet with a superb goal, helping Manchester United return to winning ways.