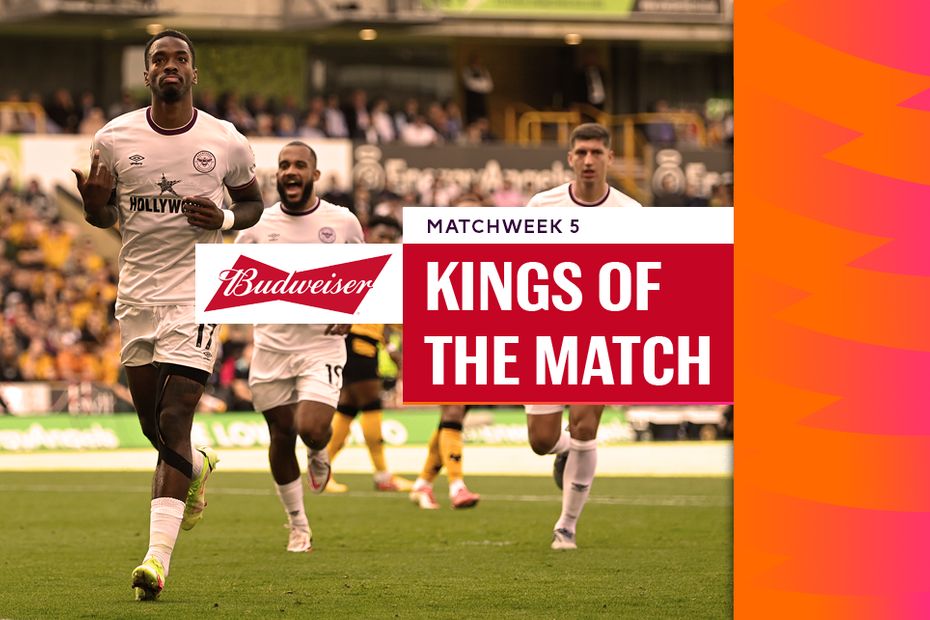 See which players have earned the backing of supporters, including Brentford's Ivan Toney

After the final whistles in Matchweek 5 of 2021/22, thousands of supporters voted to crown their Budweiser Kings of the Match.

See who came out on top in the matches, and click on the match widgets to find out how the voting went.

The Newcastle winger's solo goal and dazzling skills earned him almost half of the vote, edging out fellow scorer Raphinha.

Striker Toney took 64 per cent of the vote after he scored one goal and created the other in Brentford's historic first Premier League away win.

The Norwegian struck a stunning free-kick to earn his side back-to-back wins and take over half of the vote.

Liverpool's Egyptian scored his side's second goal and was involved in the opener. It continued their unbeaten start and gave Salah a whopping 82.1 per cent of votes.

Another solid display from the Manchester City centre-back, who made three interceptions and completed over 90 per cent of his passes.

Two goals from the winger helped Watford to their first away win of the campaign and gave Sarr well over half of the vote.

The Aston Villa man had a day to remember, coming off the bench to score his first goal for the club.

A rock in the heart of Brighton & Hove Albion's defence in a win against Leicester City that moved the Seagulls up to fourth. He took the accolade ahead of nearest challenger Jamie Vardy.

The Portuguese netted his third goal in two matches since returning to Manchester United to take an overwhelming 60.4 per cent of the vote, over a 40 per cent share more than his closest rival.

He led by example, scoring his first Premier League goal of the season while keeping out his opponents at the other end. More than 40 per cent of fans selected the impressive Brazilian.