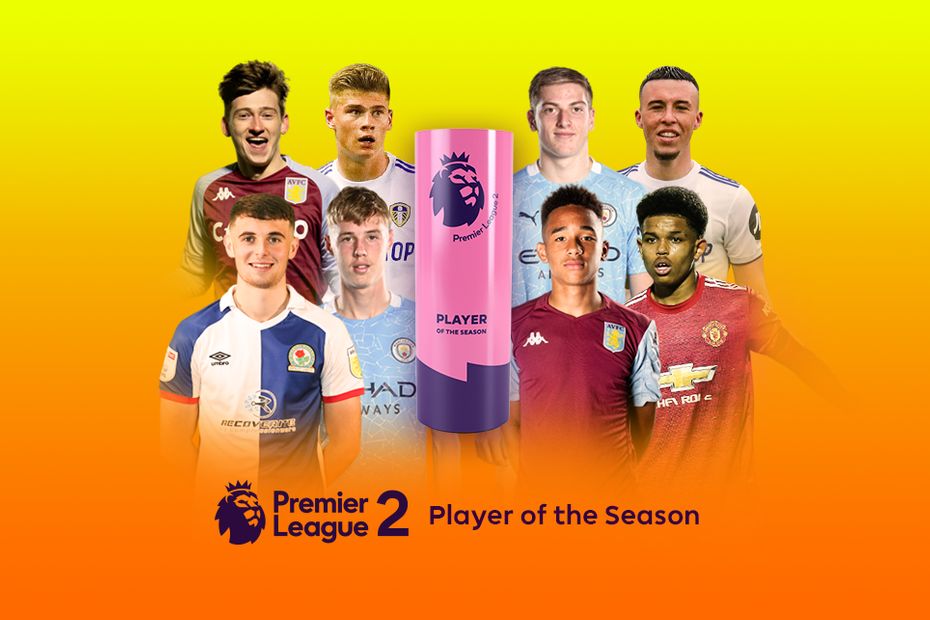 Eight young talents have been shortlisted for the 2020/21 Premier League 2 Player of the Season award.

Nominees were selected by the Premier League Football Development Panel after PL2 club coaches nominated the best performances by opposing players throughout the season.

The panel also decides the winner, who will be announced next week.

The 17-year-old forward scored 20 times in 22 starts across all competitions in an impressive campaign. He won January's PL2 Player of the Month accolade after scoring four times in Division 2 and finding the net on his senior debut as a youthful Aston Villa side took a shock lead before losing 4-1 to Liverpool in the FA Cup. He also played against the same club as Villa won the FA Youth Cup final this month at Villa Park.

The centre-back was integral as Leeds United won the Premier League 2 Division 2 title in their debut season, keeping eight clean sheets and scoring twice in 21 appearances as they secured promotion to Division 1. He also made his senior debut as he started in the EFL Cup defeat against Hull City in September.

Delap was prolific in front of goal in 2020/21, scoring 24 goals in Premier League 2, the most in one season by a player in the competition's history. The 18-year-old, November's PL2 Player of the Month, helped Manchester City claim the Division 1 title. He also made his Premier League debut against Leicester City in September, three days after scoring in his first senior match in a 2-1 EFL Cup win over AFC Bournemouth.

Following a summer move from Arsenal, the striker went on to claim the PL2 Player of the Month award for September and his 12 goals in 18 matches helped Leeds win the Division 2 title. The 19-year-old made his first senior appearance in a third-round FA Cup loss to Crawley Town in January, and has also featured in a Premier League matchday squad.

Midfielder McBride, 20, netted 12 goals and provided six assists in 20 PL2 Division 1 matches as Blackburn Rovers finished fourth in the table. His performances earned him first-team recognition in February and he was given a spot on the bench for a Championship match against Watford.

Named Premier League 2 Player of the Month for October, Palmer ended that month by making his UEFA Champions League debut as a substitute in Man City's 3-0 win at Marseille. The 19-year-old scored 13 goals and claimed seven assists from midfield as City won the Division 1 title, and he also featured on the substitutes' bench four times for the Premier League champions this term.

The 18-year-old central midfielder scored 10 goals and registered five assists in 19 PL2 Division 2 matches, earning him his first professional contract with Aston Villa. He was also named Player of the Month for March, a month in which he captained England Under-18s to a victory over Wales, and he featured as the club won the FA Youth Cup final in May.

The 17-year-old enjoyed a memorable breakthrough season, in which he produced 10 goals and five assists in Division 1 and won February's PL2 Player of the Month award. In February the forward made his Premier League debut against Newcastle United, before becoming Manchester United's youngest player in a European match as they drew 0-0 with Real Sociedad in the UEFA Europa League. He also made his second PL appearance in a final-day win at Wolverhampton Wanderers.