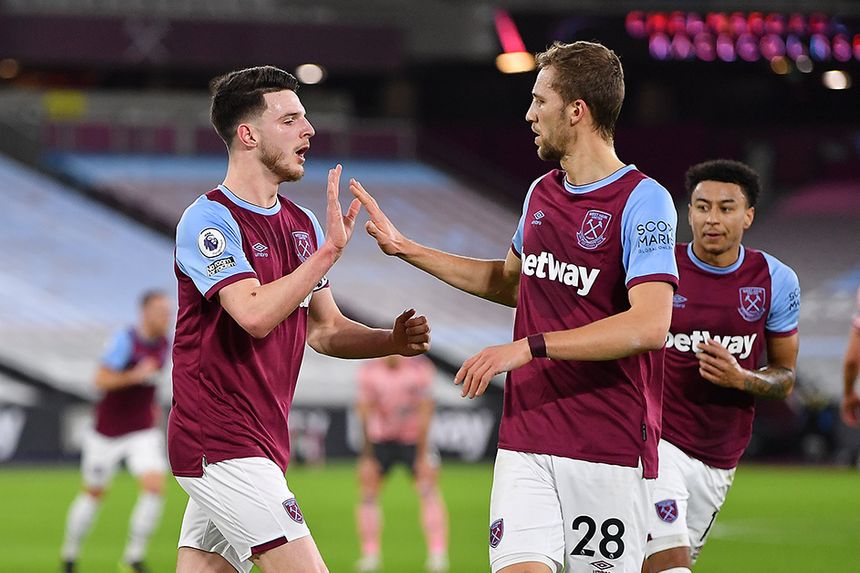 Nuno | On Moutinho, West Ham and the fans External Link
Rice: Lingard is in our Backstreet Moyes band

Declan Rice and Tomas Soucek have developed into one of the most complete central midfield partnerships in the Premier League.

Neither has missed a minute of Premier League action this season, a factor that has been crucial to the success of David Moyes' side.

Monday's trip to Wolverhampton Wanderers pits them against another accomplished midfield duo in Ruben Neves and Joao Moutinho.

All four midfielders read the play expertly, with Rice, Neves and Soucek all ranked inside the Premier League's top five for interceptions heading into Matchweek 30.

They win lots of tackles and are quick to pick up loose balls, providing valuable protection to their respective defences.

While Rice is statistically the most efficient defensive midfielder among this quartet, they all boast excellent ball-winning data.

How midfielders rank in PL

Against West Ham, Moutinho and Neves will be asked to cut out any service to the in-form Jesse Lingard.

One of Wolves' three central defenders can step out and engage Lingard, but the midfielders will attempt to stop the supply.

The task could be slightly different for Rice and Soucek.

Without a No 10 in their starting XI, the West Ham pair may find themselves in slightly wider positions to block off passes into Pedro Neto and Adama Traore.

Quality ball-winners who also offer as many attacking contributions as Soucek are rare.

Only seven non-forwards have attempted more shots than the Czech's 49 this season.

He poses a serious goal threat in open play as well as from set-pieces. Soucek has netted nine times, which ranks him joint-third for goalscoring midfielders alongside Leicester City's Harvey Barnes.

Only Ilkay Gundogan, with 12 goals, and Bruno Fernandes, with his 16 goals including eight penalties, have scored more.

With Soucek working in tandem with Rice, one of the best passers in the competition, West Ham have great balance and variety in that area.

The two players complement one other perfectly and are a major factor as to why the Hammers are mounting an unexpected top-four challenge this season.

They will hope to guide West Ham into fourth place with a win against Wolves that would lift them above Chelsea.