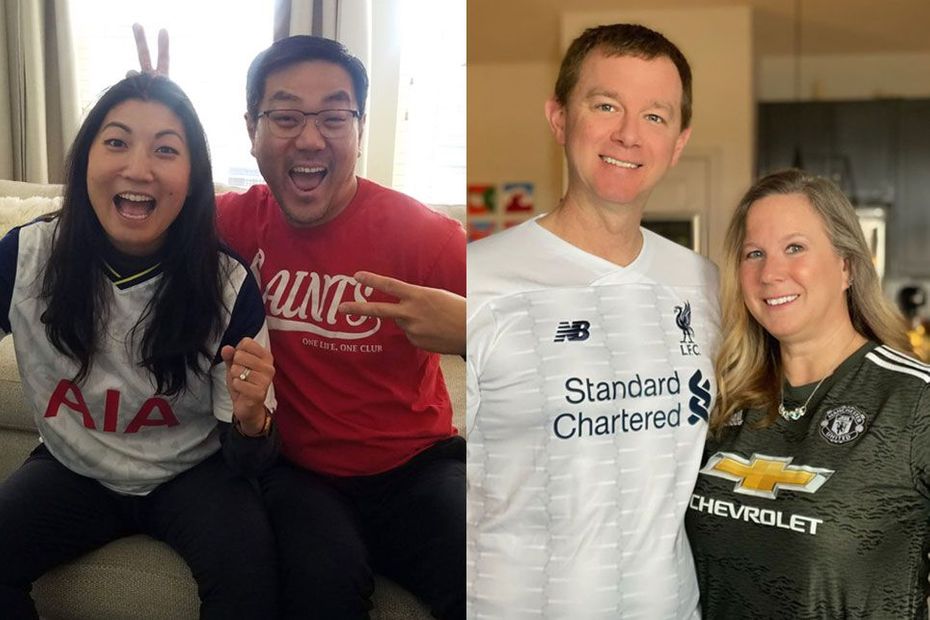 For couples across America, this weekend will be both a celebration of love and Premier League rivalries

Thousands of couples in the US use the #MyPLMorning hashtag each season to celebrate their “house divided", meaning each supports a different club.

To learn a little more about this dynamic, we spoke with two couples who live stateside and support different clubs.

Colorado-based Noah and Casey have been together for nearly 20 years, but despite Noah’s longtime fandom of Southampton, Casey only became a Tottenham Hotspur fan this season.

After badgering her to check out Spurs star Son Heung-min for years, Casey says she finally relented when she watched an online docuseries about the club. Since then, she’s become a die-hard fan and turned their once Saints-dominated home into a house divided.

“I would have loved it if she got into Southampton," Noah said. “But my first goal was just for her to be interested in the sport in general. I’m just really excited she developed a love for it, and there’s a team she can experience the highs and lows with.”

Although they support different sides, even on matchdays the love shines through.

“I will say, when we watch, I always support Southampton, whoever they’re playing against. Unless, of course, they are playing Spurs,” Casey said.

Even when it’s from a good place, though, the rivalry can strike a nerve from time to time.

“There is some ribbing that goes on in the household,” Noah said. “When Southampton lost to Manchester United, she was saying, ‘I’m so sad for you', and maybe she was trying to be nice, but it made me feel terrible!”

“I actually did feel bad about that game!” Casey replied.

While Noah and Casey became a couple divided in their fandom decades into their relationship, some couples start off that way.

The couple from Ohio both admitted early on in their relationship that they were fans of rival clubs: Rebecca, a Man Utd fan, and Christopher, a Liverpool supporter.

“Since we’re not from across the pond, luckily we can make this work,” Rebecca said. “We don’t have the decades of hatred that fans can develop living in it. We can do this and pick on each other, but not let it get too big.”

“It’s really the one thing we disagree on,” Christopher added.

Although both couples came to their fandoms in different ways, they do share a challenge that many couples face: convincing their children to support their club. For Rebecca and Chris, it’s an ongoing battle.

“We do recruit the kids a bit, and sometimes we’ve flipped them!” according to Rebecca.

In Noah and Casey’s household, the young ones are torn between the history of their dad’s support and the excitement generated by players like Son. No matter what they choose, though, Noah says it’s all about love.

“It’s such a wonderful experience and feeling to have, no matter who you support,” he said. “I’m just glad that the whole family is developing an appreciation and a love for a sport that has been such a big part of my life.”