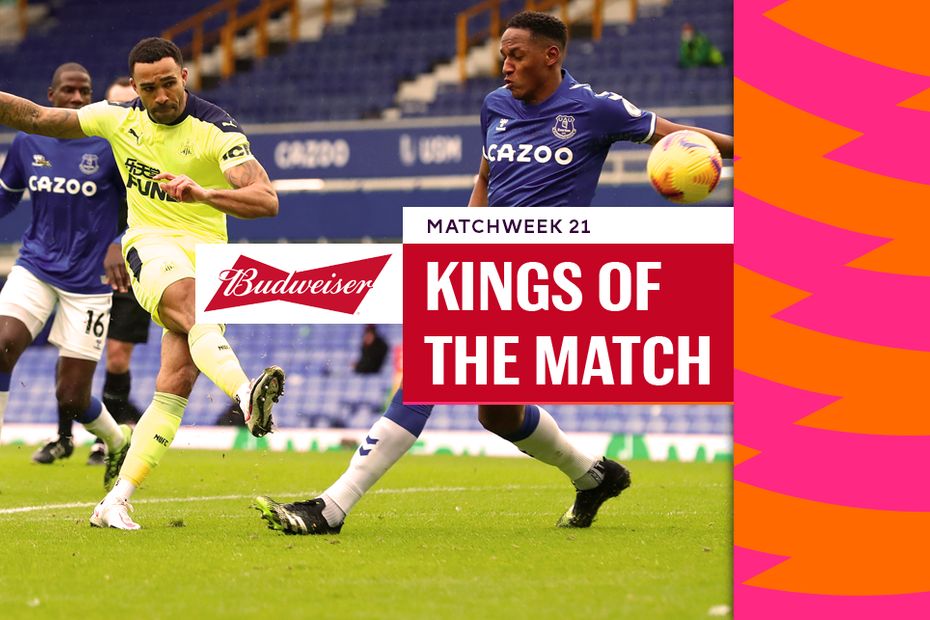 See which players earned the backing of supporters, including Newcastle's Callum Wilson

Budweiser King of the Match explained
What we learned in Matchweek 21
GW21 FPL stats: Salah ends drought in style

Supporters have voted in their thousands to crown their Budweiser Kings of the Match in Matchweek 21.

The striker's brace took him to double figures this season and past the 50-goal mark in his Premier League career, earning him a massive 86.5 per cent of the vote.

The Portuguese centre-back contributed to a fifth successive clean sheet as Manchester City secured a narrow victory to extend their lead at the top.

The Brazilian scored one goal and had a hand in the other as West Bromwich Albion fought hard for a point in a key relegation duel.

Each player in the top 10 of this vote was a defender or goalkeeper, and Wan-Bissaka was the favourite, narrowly beating Arsenal's No 1 Bernd Leno.

The 20-year-old was again deployed as a right wing-back by Thomas Tuchel, and he played a key role in the German's first win at the club, setting up the opening goal for Cesar Azpilicueta.

An overwhelming 83.9 per cent voted for the Leeds United striker as he scored a fine goal and set up two more in an outstanding individual performance.

The Liverpool forward also took over 80 per cent of the vote after scoring two superb second-half goals at London Stadium.

The Belgian struck his first goal since the opening weekend of the season to earn Brighton & Hove Albion's first Premier League home win of 2020/21.