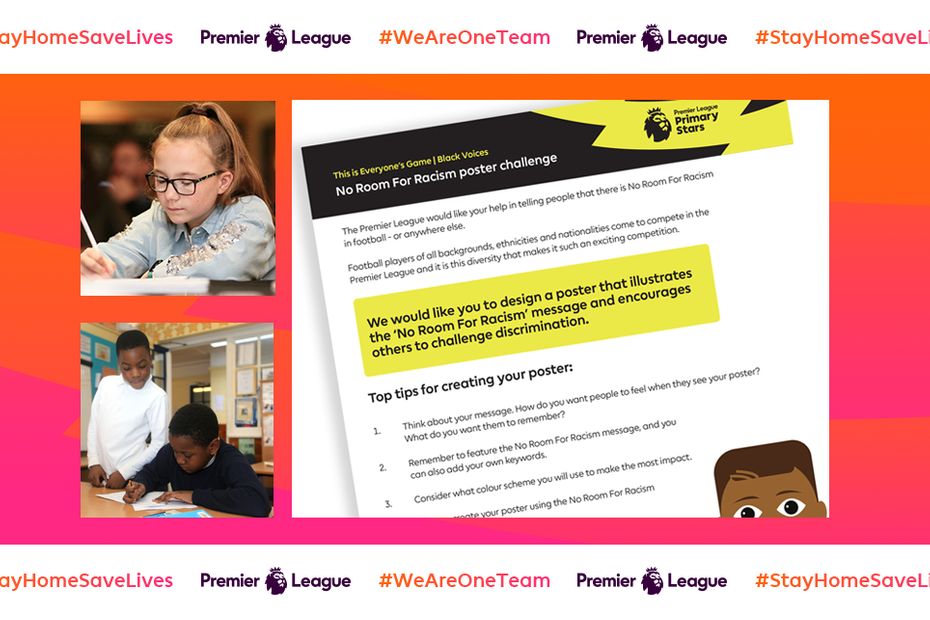 The Premier League remains committed to tackling all forms of discrimination in football and one of the ways it does so is using the power of football to encouraging discussion among kids about diversity and racism.

Through Premier League Primary Stars (PLPS), schoolchildren aged five to 11 have been encouraged to learn more about different cultures. The programme offers resources for children to learn about heritage, stereotyping and diversity.

One of the projects primary school youngsters across England and Wales engaged with was to create posters for No Room For Racism, promoting inclusion.

Year 5 teacher Stacey Wilde from St James' Church of England Primary School, in Aston-under-Lyne in Lancashire, invited her class to take part in the activity, and they were happy to do so.

"The children didn’t need much encouragement to join in the Premier League Primary Stars No Room For Racism challenge as they were excited to support a cause they believe in," Stacey says.

"Children are familiar with the PLPS  website and they are proud to have received Premier League Primary Stars football kit [as part of the PLPS Kit & Equipment Scheme] and this is further encouragement to 'give something back'.

"Our school, in Ashton, is very diverse and children are supportive and kind to each other.

"They want to make sure children grow up without racism so that they learn to judge people by their personality and deeds, not the colour of their skin.

"The racist people are in the minority so if the rest of us challenge racism then hopefully we can stamp it out."

Your kids can design their own No Room For Racism poster at home by accessing PLPrimaryStars.com. There they will also find a series of free resources featuring videos of Premier League players talking about diversity, which aim to stimulate discussions.