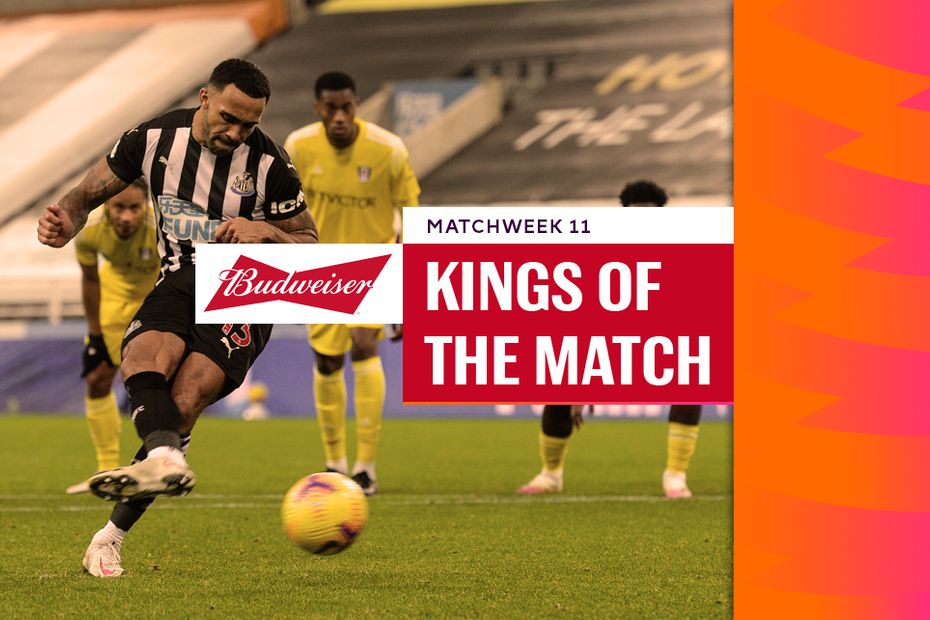 See which players earned the backing of supporters, including Newcastle striker Callum Wilson

Supporters voted in their thousands to crown their Budweiser Kings of the Match in Matchweek 14.

Salah was introduced as a 57th-minute substitute and had a significant impact, assisting Roberto Firmino and scoring twice to claim two-thirds of the vote.

He may have been on the losing side but Vestergaard's performance in Southampton's defence earned him 20.6 per cent of the vote, narrowly beating Ruben Dias (18.9 per cent) and goalscorer Raheem Sterling (16.9 per cent) to the award.

The Everton defender headed in the decisive goal and was the clear winner.

An overwhelming 76.5 per cent of fans voted for the Newcastle United striker who, after winning the penalty, made no mistake from the spot.

Substitute Welbeck stepped off the bench to rescue a point for Brighton & Hove Albion with a late volley.

Vardy opened the scoring with a penalty, netting for the 11th time this season, and then forced an own goal to win the supporters' vote.

Fernandes provided the assist for Scott McTominay's opening goal before netting twice himself.

Over three-quarters of the votes cast went to the Aston Villa captain as he provided an assist and then won a late penalty at The Hawthorns.

The Burnley goalkeeper kept Wolverhampton Wanderers at bay early on at Turf Moor as his side moved out of the bottom three.

Two goals in the last 12 minutes from the Chelsea striker secured victory against West Ham United and earned him 35.9 per cent of the vote.