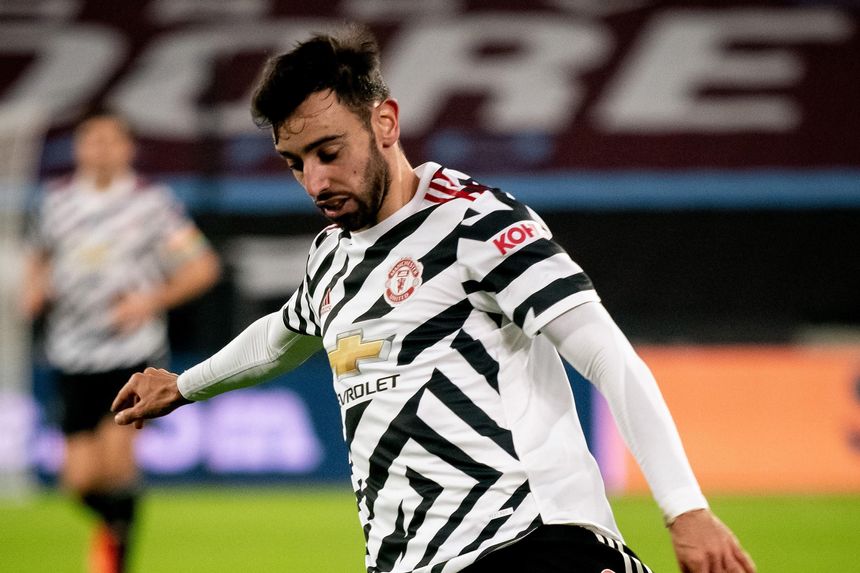 Man Utd star's run of double-digit away hauls ends by being benched at West Ham, while De Bruyne delivers

Those managers who selected Bruno Fernandes (£10.9m) as their captain in Fantasy Premier League were dealt an early blow with the Manchester United midfielder only named among the substitutes at West Ham United.

The Portuguese was the most-popular armband pick for only the second time this season, having produced double-figure hauls in all four of his away matches this season.

But that run was ended, even if Fernandes provided an assist for Paul Pogba (£7.7m) after being introduced at half-time and proving the inspiration for the 3-1 fightback win.

Interestingly, the total of 890,085 managers who handed Fernandes the armband is the lowest for the leading captain choice this season.

Hot on his heels was Kevin De Bruyne (£11.7m), who received the backing of more than 863,000 ahead of Manchester City's home meeting with Fulham. And the Belgian rewarded their faith with his third double-figure haul of the season as he claimed 14 points in a 2-0 victory.

The top captain pick last Gameweek, Jamie Vardy (£10.3m), was third. He left it late to reward managers' faith as he scored a 90th-minute winner for Leicester City at Sheffield United on Sunday.

Unlike the masses, the leading 100 FPL managers favoured De Bruyne, with Harry Kane (£10.9m) selected in second and Fernandes and Vardy tied for third.

Kane became the all-time record goalscorer in north London derbies as Tottenham Hotspur won 2-0 against Arsenal on Sunday. The striker claimed a goal and an assist to reward the faith of 14 of FPL's top 100 managers.

Liverpool's in-form Diogo Jota (£6.9m) was the most-bought player, with over 600,000 adding him to their squads, but he was dropped to the substitutes' bench for the home match against former club Wolverhampton Wanderers.

He did come on for the final 17 minutes and earned only one FPL point.

Riyad Mahrez (£8.4m) equalled his career-best score with a 21-point haul in Gameweek 10, prompting more than 532,000 to buy the Algerian. But he blanked for the sixth time this season against Fulham to disappoint his backers, although he did claim a bonus point.

James Ward-Prowse (£6.2m) gained 389,000+ new owners after scoring his third free-kick of the season last time out and he claimed an assist for a five-point return as his Southampton side defeated Brighton & Hove Albion.

It was his handball that led to Brighton's opening penalty.

Jack Grealish (£7.7m) was both the most-benched and the most-sold player as managers were split on how to deal with Aston Villa's postponed fixture with Newcastle United.

A head injury to Raul Jimenez (£8.3m) led to him being shipped out in large numbers, with more than 441,000 parting company with the Mexican forward.

The third most-sold player was Wilfried Zaha (£7.3m), who came back to punish his sellers.

Zaha returned two goals and an FPL assist as he played for the first time since Gameweek 8 after recovering from COVID-19 as Crystal Palace won 5-1 at West Bromwich Albion.