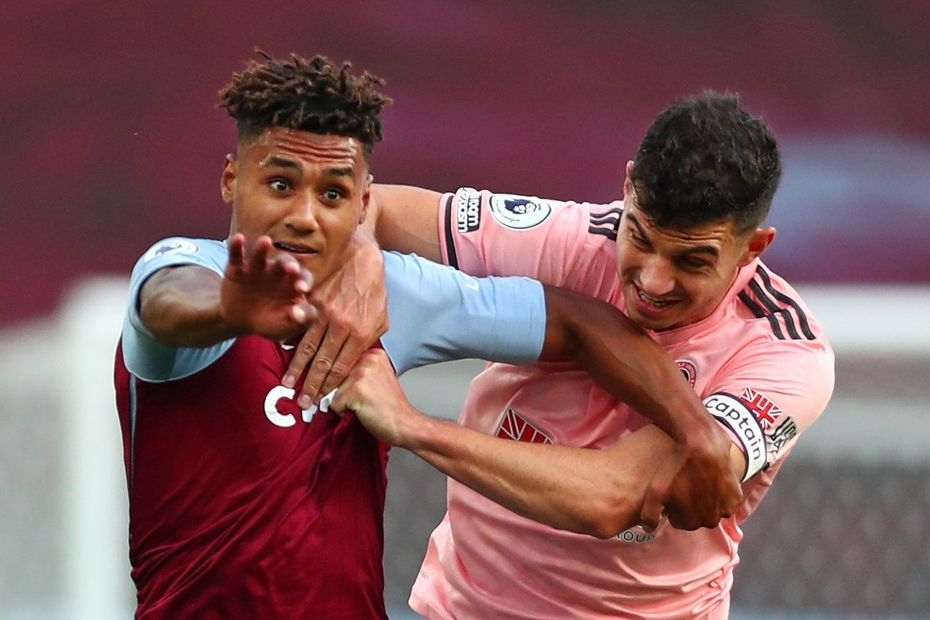 Incident: Arsenal v West Ham United: Arsenal defender Gabriel cleared the ball in his own penalty area, but it came off his shoulder.

Prior to this definition, the Laws of the Game simply said “hand or arm”, so at least now we have a point of reference. With this incident, the VAR determined that the ball did not hit Gabriel in the red zone and therefore was not a penalty.

Incident: Leicester City v Burnley: The ball struck the top of Chris Wood's shoulder just before he put Burnley 1-0 ahead.

Foy’s view: This is not dissimilar to the Gabriel incident, but at the other end of the pitch. The ball came off Wood’s shoulder area. The VAR looked at this, determined there was no clear evidence it had hit his arm where it would constitute handball, and correctly awarded the goal.

Incident: Manchester United v Crystal Palace: As Jordan Ayew ran through on goal, his shot glanced off Victor Lindelof’s arm. Play continued before the VAR advised the referee to look at the incident at the Referee Review Area (RRA), and a penalty was awarded.

Foy’s view: The new directive is that if your arm is outstretched from the body, it is likely you will be punished, irrespective of whether it’s deliberate or not. However there is an element of subjectivity to it, and there are mitigating circumstances to consider.

In this incident, it could be argued that the ball hit Lindelof from a short distance, his arm was in a natural running position, and the decision not to award the penalty by the referee in real time was not a clear and obvious error.

I think it could have gone either way. I can understand why it was given but we don’t want to start seeing players deliberately kicking the ball up onto defenders' arms.

Incident: Southampton v Spurs: Moussa Djenepo's pass deflected up off Harry Winks and hit the arm of Matt Doherty in the penalty area. The referee awarded the penalty after looking at the pitchside monitor.

Foy’s view: There is still a subjective nature to handball, and Spurs are unfortunate here due to the close proximity and the fact it came up off Winks’ foot. The on-field decision was not to award the penalty.

You can’t argue with the fact that the ball has struck his extended arm, and referees have been consistent in penalising that in these opening two match rounds. But the handball guidance says that a deflection off another player’s foot from point-blank range should not be penalised if the arm is close to the body.

Incident: Man Utd v Crystal Palace. David De Gea saved Ayew’s penalty but had both feet off the line when doing so. The VAR advised the referee to retake the penalty.

Foy’s view: It was only going to be a matter of time before we had a penalty retaken for this offence. Application of this Law is new for this season in the Premier League, and it’s very clear, stating that a goalkeeper must have at least one foot on the line when the penalty is taken.

Unfortunately for De Gea, he clearly had both feet off the line, so this was the correct decision. And there is no Law to stop a different player taking the second spot-kick. This was excellent use of VAR as there is no tolerance allowed.

Incident: Chelsea v Liverpool. Andreas Christensen put two arms on Sadio Mane and pulled him to the ground as the Liverpool forward ran through on goal.

The on-field decision was yellow card but then the VAR, believing there to be a clear and obvious error, advised the referee to view the incident again on the pitchside monitor. The yellow card was upgraded to red.

Foy’s view: The match official may have thought the goalkeeper was going to get the ball ahead of Mane, which is why he initially issued the yellow card. But this is where VAR can really add value, as when you look at the replay, it’s clear that Mane would have got to the ball, and the red card is the only option.

It was a difficult call in real time for on-field officials, but the process was excellent. The VAR talked the referee through the footage at the RRA and we got to the correct decision.

Incident: Aston Villa v Sheffield United: John Egan was shown a red card after getting caught on the wrong side of Ollie Watkins and pulling him back as the Villa striker ran through on goal.

Foy’s view: This is an interesting one as a lot depends on the on-field decision. The referee clearly felt Watkins was the favourite to get the ball as it was played through, and was being fouled by Egan, even though he wasn’t in possession.

Once he decided that, he had to determine if it was a clear goalscoring opportunity, which he did, and therefore issued the red card. The VAR checked this and determined that it was not a clear and obvious error, and the decision stood.

Incident: Aston Villa v Sheffield United: Chris Basham was tripped in the box by Villa defender Matt Targett as he tried to clear the ball. Targett was shown a yellow card.

Foy’s view: It’s definitely a penalty. That’s not up for debate. But the question is why it was a yellow card and not a red card, as it was for Egan.

The referee felt Targett made a genuine attempt to play the ball, and that’s why it was a yellow. This differs it from the Egan red card.

If the referee had thought Targett didn’t make an attempt for the ball, it would have been red. I don’t think Targett even saw Basham, and in attempting to clear the ball, he fouled him. So it was the right decision for me.

Incident: Newcastle United v Brighton & Hove Abion: Yves Bissouma flicked his leg in the air and caught Jamal Lewis in the face with his studs. The referee initially gave a yellow card, but the VAR felt not awarding a red was a clear and obvious error so asked the referee to review the decision, and it was upgraded to red after he took a second look at the screen.

Foy’s view: While there was no intent from Bissouma, he has a duty of care to his opponent. He is unfortunate, but once the referee takes a second look, it has to be a red card for serious foul play.