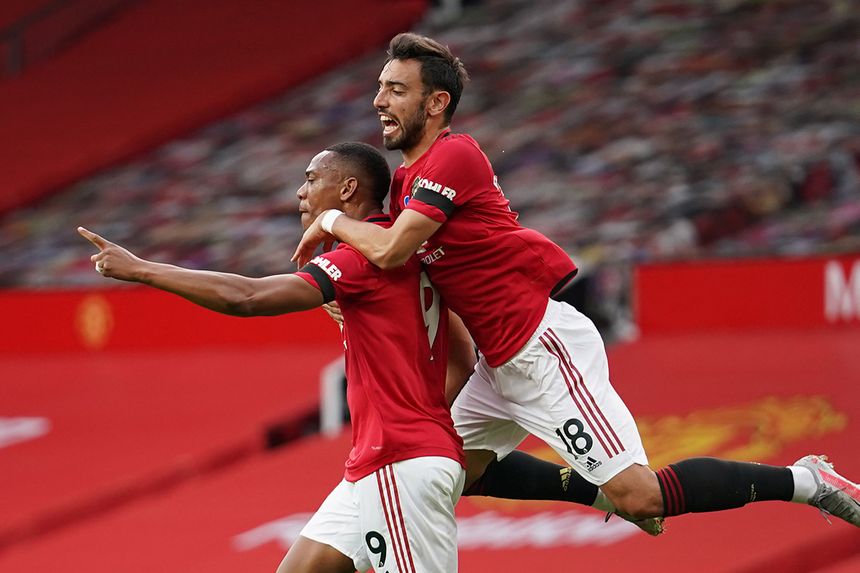 The Scout on why Martial, Fernandes and Rashford all provide big alternatives for the armband at home to Crystal Palace

United on the opening day: Records, stats and more External Link
The advantages of starting FPL in Gameweek 2
The Scout's essential FPL tips for Gameweek 2

The Gabon international rewarded the 1.5 million managers who captained him in Gameweek 1 with a goal and 14 points against Fulham.

Facing a Hammers defence with only one clean sheet in their last 19 Premier League matches, Aubameyang can easily improve on his opening-weekend haul.

However, Man Utd's contest with the Eagles looks just as encouraging for attacking returns.

His dominance of dead-ball duties, including penalties, makes the Portuguese one of the most consistent sources of points in FPL.

Fernandes averaged 8.4 points per match last season, more than any other player.

Indeed, when selected, Martial was involved in 53 per cent of their goals at Old Trafford, more than any team-mate.

And Marcus Rashford (£9.5m) could be the big differential.

At home last season, Rashford's 12 goals and 53 shots were the highest by Man Utd players.

Yet he is owned by only 6.0 per cent of managers ahead of Saturday's 11:00 BST deadline.

Ben Crabtree (@FC_CrabDogg): I'm torn between Aubameyang and Fernandes. Maybe to justify picking Fernandes for his blank Gameweek 1, I should captain him.

Neal Thurman (@nealjthurman): The typical responses are going to involve Aubameyang and Fernandes, given their quality and respective match-ups. So, in the interest of presenting an alternative, I'll suggest James Rodriguez (£7.5m) in his home debut for Everton against promoted West Bromwich Albion.

Paul Gee (@FPLPaulGee): For me, it's Aubameyang. He's just signed a new contract and I expect him to bang.

Holly Shand (@FFCommunity_): I'm struggling to split Aubameyang and Fernandes. But I'm determined to keep things simple after last week's success, so I'm likely to play it safe with the Arsenal man, who has got a few more matches under his belt.

Lee Bonfield (@FPLFamily): The disappointing performance against Newcastle United last week means I'm targeting West Ham as opposition for my captain, so I'm looking at Aubameyang. Off the mark early in Gameweek 1 and with good pre-season form, I'm backing him to celebrate his new contract with a goal or two.

Utkarsh Dalmia (@zophar666): Aubameyang is an easy choice this week. He could have had more against Fulham and now he faces a West Ham side who looked poor against Newcastle.

Pranil Sheth (@Lateriser12): Aubameyang seems the obvious choice on paper but sometimes heart rules over head and, being a Man Utd fan, I'm going with Martial, who has done well for me in the past.

Sam Bonfield (@FPLFamily): Aubameyang looks a great choice this week. With a goal in the opening Gameweek and a lovely fixture against West Ham on the back of signing a new contract, he should score well.

Geoff Dance (@GeoffreyDance): I see a big Man Utd performance at home to Crystal Palace and Rashford's move to midfield in FPL helps bolster his captaincy credentials in Gameweek 2.

Ben McNair (@drbenmcnair): It's a tough call but I'm thinking of sticking with Mohamed Salah (£12.0m). He has form, he's a proven asset and Chelsea tend to play open games. Just look at the meeting between these clubs late last season, which finished 5-3 to Liverpool at Anfield.

Chuck Booth (@ChuckBoothSport): I'm going to ride the hot hand and keep the faith in Salah after he rewarded me with a hat-trick in Gameweek 1. Martial is a tempting option though.

Nick (@WGTA_Nick): Aubameyang again for me. West Ham at home is too enticing a prospect.

Don't get caught out. GW2 deadline: 11:00 BST on 19 September. Register your team now at fantasy.premierleague.com.