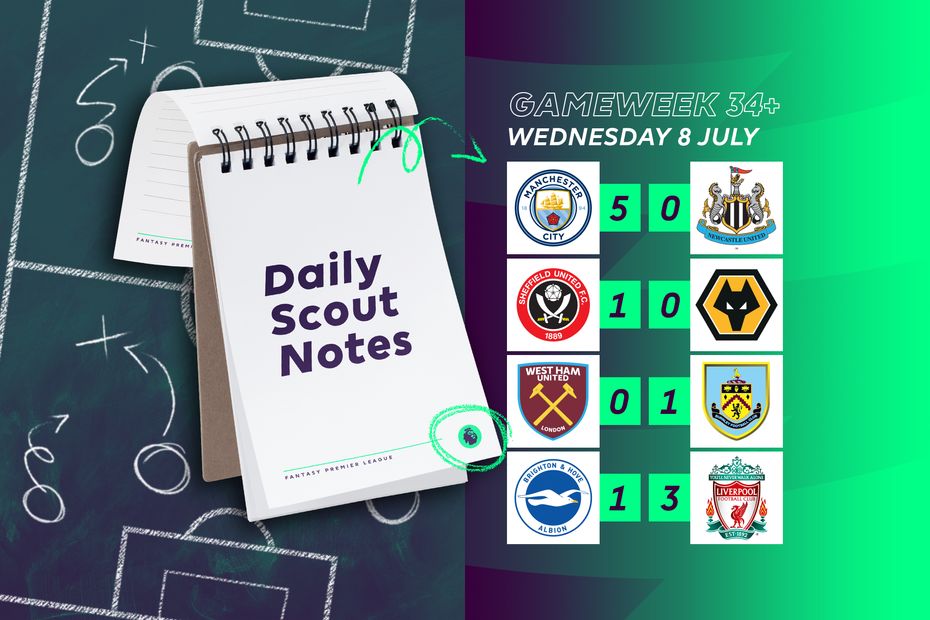 The Scout looks at the fallout from Wednesday's matches as Salah, Mane and De Bruyne get mixed results as popular captains

More than 1.1 million managers gave the Belgian the armband but he managed just a single assist against Steve Bruce’s side.

After being benched at Southampton last weekend, De Bruyne was restored to the starting line-up for the Magpies’ visit.

But he was overshadowed by a number of midfield team-mates.

Meanwhile, a first goal since Gameweek 27 for Gabriel Jesus (£9.6m) further highlights the number of options available to Pep Guardiola in attack.

The fixtures remain kind for Man City, who visit Brighton & Hove Albion before a home encounter with AFC Bournemouth.

Yet with an FA Cup semi-final following three days after the Cherries encounter, rotation remains a big concern over the final Gameweeks.

For Newcastle, Allan Saint-Maximin (£5.5m) and Miguel Almiron (£5.8m) both missed out with minor knocks ahead of a weekend visit to Watford.

The pair have a combined two goals and three assists over their previous two matches and will pose the Hornets big problems if passed fit.

The Blades’ centre-back headed a late winner and has now found the net in each of the last two Gameweeks, also getting on the scoresheet in their midweek draw at Burnley.

Meanwhile, Dean Henderson (£5.2m) moved up to third in the FPL goalkeeper standings after claiming his 12th clean sheet of the campaign.

But his owners may have to rely on save points in the short term. Chris Wilder’s men face Chelsea and Leicester City in their next two matches.

The 1-0 loss means Wolves have conceded in back-to-back matches for the first time since Gameweek 24.

Nonetheless, owners of Matt Doherty (£6.4m) should still be optimistic.

Nuno Espirito Santo’s side have kept seven shutouts in their last 10 matches and face favourable encounters with Everton, Burnley and Crystal Palace in the next three Gameweeks.

In attack, sales of Raul Jimenez (£8.3m) continue to pick up after a third straight blank.

He is the most-sold forward in the Gameweek, with more than 21,000 transfers out.

Winger Adama Traore (£5.7m) appears to have re-established himself as a regular, having now started three of the last four Gameweeks

A 14th clean sheet of the season helped Nick Pope (£5.0m) extend his lead at the top of the FPL goalkeeper standings.

He has a nine-point advantage over his nearest rival, Kasper Schmeichel (£5.4m), after helping Burnley to a 1-0 win at West Ham United.

Burnley’s schedule over the next two Gameweeks, however, suggests owners of their backline may decide to bench them.

The Clarets visit Liverpool at Anfield before welcoming Wolverhampton Wanderers to Turf Moor.

The Burnley striker scored the decisive goal against David Moyes’ Hammers. He has produced attacking returns in each of his last three appearances.

West Ham, meanwhile, have a run of favourable opponents in the final four Gameweeks.

The Hammers face three of the bottom four, Norwich, Watford and Aston Villa, during that period.

Michail Antonio (£6.9m) is their form option, scoring in two of the last three Gameweeks.

Sebastien Haller (£6.8m) made his return from injury and could also punish Norwich’s defence this weekend.

Mohamed Salah (£12.5m) returned to the top of the FPL player standings by producing his highest haul of the season in Liverpool’s 3-1 win at Brighton & Hove Albion.

The Egyptian scored twice and supplied an assist to claim 18 points, his ninth double-figure haul of 2019/20.

Salah is now tied with De Bruyne at the summit on 223 points.

But it was a frustrating night for owners of Sadio Mane (£12.4m), who dropped to the bench at the Amex Stadium.

The fifth top captain pick for Gameweek 34+, Mane picked up zero points against the Seagulls after receiving a booking as a second-half substitute.

After benching Roberto Firmino (£9.4m) in Gameweek 33+, Jurgen Klopp’s decision to name regulars such as Mane and Andrew Robertson (£7.0m) as substitutes suggests he will keep rotating his line-ups over the run-in.

Owners of Salah and Trent Alexander-Arnold (£7.8m) must ensure they have strong replacements on their benches in the event they are next in line for a rest.

For Brighton, Tariq Lamptey (£4.0m) continues to offer value as the cheapest starting defender in FPL.

Also in this GW34+ series