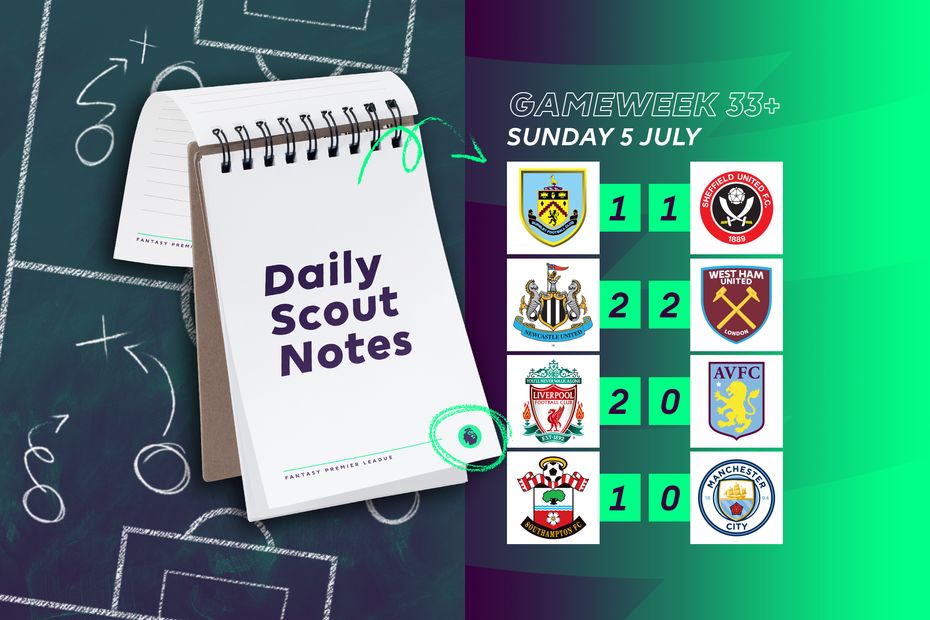 The Scout sees the positive side from the disappointing returns of Manchester City's Kevin De Bruyne, Phil Foden and Riyad Mahrez

Burnley were denied a 14th clean sheet of the season by a John Egan (£4.5m) equaliser in their 1-1 draw at Turf Moor.

The Sheffield United centre-back prevented the 20.4 per cent managers who own Nick Pope (£5.0m) from picking up more points thanks to the game's top-scoring goalkeeper in 2019/20.

Tarkowski has claimed 22 points in the last three Gameweeks.

Furthermore, he has the schedule to get more returns. Three of Burnley's final five matches score only two in the Fixture Difficulty Ratings (FDR).

Up front, Chris Wood (£6.1m) could also be a handy differential for the run-in, returning from injury with an appearance off the bench.

Sheff Utd's defence continue to frustrate their FPL owners, having conceded in each of the last four Gameweeks.

The Blades' upcoming run of opponents suggests they may struggle for more clean sheets.

They face three of the top six sides in the next three Gameweeks.

Listed as a midfielder in FPL, Antonio continues to profit from a role up front, producing 19 points in his last two outings.

Owned by less than one per cent, his schedule suggests he could be a handy differential for the run-in.

According to the FDR, three of the Hammers' final four matches score only two.

Bowen has supplied three assists in his last two matches, while the cut-price Soucek has scored in back-to-back Gameweeks.

The winger was among the top 10 most-bought players on the back of two goals and three assists in his previous four outings.

But he managed only two points and next faces a trip to Manchester City.

While many owners will look to bench him in Gameweek 34+, Saint-Maximin's subsequent schedule can help him get back among the points.

Salah was the top captain pick for Gameweek 33+, having scored in each of his last six home matches.

But the Egyptian somewhat disappointed his 1.2million captaincy backers with just a single assist.

Mane’s opener helped him to his eighth double-figure haul of the season. The Senegalese is five points behind Salah in the FPL standings on 200 points.

At the back, Liverpool rewarded their Fantasy investors again with a 15th clean sheet of the campaign.

And they can continue to bring in points over their next two matches against Brighton & Hove Albion and Burnley.

However, it remains to be seen how heavily Jurgen Klopp will rotate his XI now Liverpool have won the title.

His decision to start Divock Origi (£5.1m) up front perhaps hints at more changes over the remaining matches.

Playing as centre forward, Davis could be a useful enabler for managers looking to play a 3-4-3 formation.

A role on the bench for Kevin De Bruyne (£10.8m) had a significant effect on the FPL captaincy for Gameweek 33+.

The Manchester City player was the second-favourite captain pick, with 857,839 handing him the armband at Southampton.

But De Bruyne managed just a single point as a second-half substitute.

On the plus side, both are now favourites to start at home to Newcastle United in Gameweek 34+.

De Bruyne has produced 14 points in each of his last three home starts, while Foden has 16 and 12-point hauls in his last two at the Etihad Stadium.

Riyad Mahrez (£8.6m) returned to the first XI but was withdrawn before the hour.

He has totalled just 90 minutes over the last two Gameweeks and could retain his start against the Magpies.

Despite upcoming matches with Everton and Manchester United, McCarthy could still prove a value pick when Southampton’s schedule turns favourable in Gameweek 36+.

Also in this GW33+ series