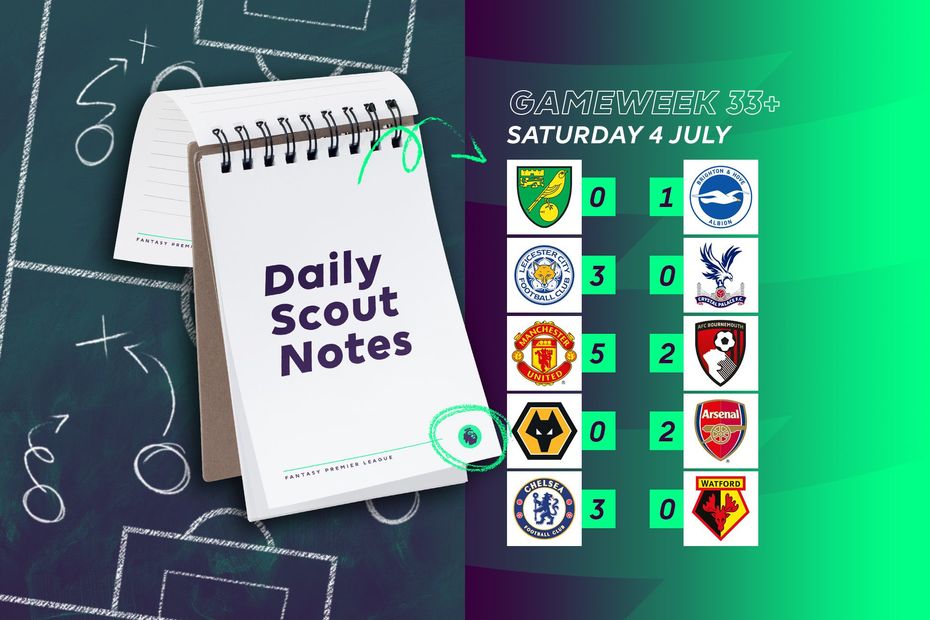 Tariq Lamptey (£4.0m) made his third successive start for Brighton & Hove Albion in a 1-0 away win over Norwich City.

The right-back has now started each of the Seagulls’ last three matches, also claiming a clean sheet against Leicester City in Gameweek 31+.

Lamptey can be a handy squad option for FPL managers yet to play their Wildcards.

Costing just £4.0m, he can be easily benched for back-to-back home encounters with Liverpool and Manchester City.

In attack, Aaron Connolly (£4.2m) could also provide a budget-friendly option, having started each of Brighton’s last three fixtures.

For Norwich, owners of their two most popular players, Todd Cantwell (£4.6m) and Teemu Pukki (£6.5m), will be looking for replacements after both were named on the bench at Carrow Road.

Phil Foden (£5.3m) of Manchester City and Dominic Calvert-Lewin (£6.5m) of Everton both have strong upcoming schedules, providing alternatives in midfield and up front respectively.

Jamie Vardy (£9.7m) returned to the top of the FPL forward standings by scoring twice in Leicester City’s 3-0 home win over Crystal Palace.

The third most-sold player ahead of the Gameweek 33+ deadline, Vardy had frustrated since the restart with three successive blanks.

However, the 151,000+ managers who parted company with him were made to regret their decision as Vardy recorded his eighth double-figure haul of the season.

Harvey Barnes (£6.0m) has featured as a substitute for the second time in three Gameweeks.

But he now looks likely to start against Arsenal in midweek, having emerged from the bench to provide a pair of assists.

At the back, a 12th shutout of the campaign helped Kasper Schmeichel (£5.4m) move up to second in the goalkeeper standings.

Although the Foxes have impressed at both ends of the pitch, a tricky end to the season could soon reduce their FPL appeal.

According to the Fixture Difficulty Ratings (FDR), three of their final five matches score four.

Roy Hodgson's side face Chelsea and Manchester United in the next three Gameweeks.

This suggests captaining players such as Christian Pulisic (£7.1m) and Bruno Fernandes (£8.8m) for those respective fixtures could bring in big returns.

Fernandes was the most-bought player for Gameweek 33+ and the fourth-top armband pick.

And the Portuguese justified that faith with a goal, two assists and 15 points. He has now averaged 8.9 points per match this season, more than any other player in FPL.

However, his owners were left disappointed after Marcus Rashford (£9.1m) took and converted a penalty for Man United's second goal. This suggests he is now sharing spot-kick duties with Fernandes.

A role up front continues to benefit Martial. The Frenchman has excelled at Old Trafford recently, scoring four goals and supplying two assists in his last two home matches.

Meanwhile, Greenwood is already the most-bought player for Gameweek 34+, with over 54,000 new owners for the Red Devils’ visit to Aston Villa.

He is enjoying his longest run of starts this season, named in the first XI in each of the last three Gameweeks.

AFC Bournemouth will hope Callum Wilson (£7.4m) can make a difference in their midweek home match with Tottenham Hotspur. The striker is available for selection, having served a two-match suspension.

Arsenal continue to offer value at both ends of the pitch after recording their third successive Premier League victory and clean sheet.

The 2-0 win at Wolverhampton Wanderers means Emiliano Martínez (£4.3m) has yet to concede since replacing the injured Bernd Leno (£4.8m) in Gameweek 31+.

Arsenal's defensive improvement has coincided with a switch to three at the back, with Shkodran Mustafi (£5.1m) and Kieran Tierney (£5.3m) the two defenders to feature in all three matches.

Tierney has claimed 19 points in that run and the wing-back was unfortunate not to also pick up his third clean sheet when he was replaced on 55 minutes.

In attack, Bukayo Saka (£4.7m) continued to offer a cut-price source of points by scoring the opener.

He has started nine of Arsenal's last 11 matches and has also supplied four assists during that run.

Meanwhile, Alexandre Lacazette’s (£9.4m) goal as a late substitute suggests he could return to the first XI for Eddie Nketiah (£4.4m) against Leicester City in midweek.

Despite the home defeat, owners of Wolverhampton Wanderers defenders will be encouraged by the schedule.

Three of their next four opponents, Sheffield United, Burnley and Crystal Palace, are among the bottom 10 sides for goals scored this season.

Christian Pulisic and Willian (both £7.1m) extended their run of points as Chelsea beat Watford 3-0 at Stamford Bridge.

Willian has now converted a penalty in three straight matches, indicating he has secured spot-kick duties with Jorginho (£4.9m) again named on the bench.

And Pulisic's assist means he has produced attacking returns in each of Chelsea's four matches following the restart.

Both, however, were overshadowed by Ross Barkley (£5.6m). Starting for the third successive fixture, the midfielder scored once and supplied an assist.

Up front, Olivier Giroud (£6.6m) was favoured over Tammy Abraham (£7.5m) as Frank Lampard continued to rotate, and the Frenchman scored the opening goal.

At the back, meanwhile, Cesar Azpilicueta (£5.9m) strengthened his claim as the go-to Chelsea defender with Marcos Alonso (£6.2m) dropping to the bench.

Azpilicueta has three assists and 26 FPL points in the last four Gameweeks.

Chelsea could be worth investing in at both ends of the pitch over the upcoming Gameweeks, with successive showdowns with Crystal Palace, Sheffield United and Norwich City.

Watford also embark on a kinder sequence of matches that could yet reward investment.

Ismaila Sarr (£6.1m) can provide a value option over the next three Gameweeks, with the Hornets set to face Norwich City, Newcastle United and West Ham United.