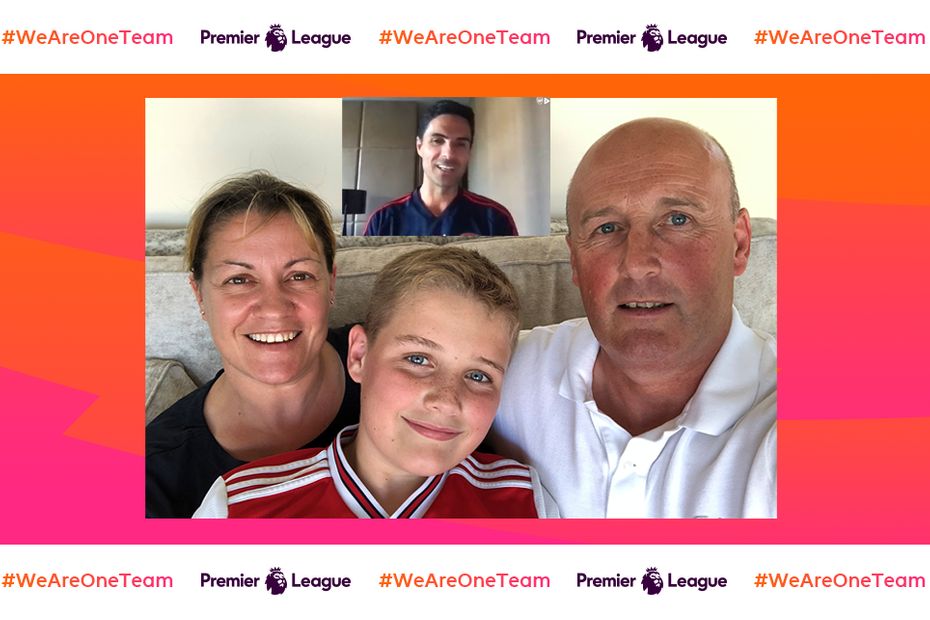 Nicholas Burton's 12th birthday in May could have been one he would want to forget because of the coronavirus pandemic. Instead, Arsenal made it one to remember.

His parents have both been serving at the front line of public service in their local community in West Sussex. His mum, Caroline, is a ward sister at a local hospital while his dad, Mark, is a firefighter.

'Never been so scared'

Just before Nicholas's birthday in May, his mum tested positive for COVID-19 and was twice taken to A&E because of her symptoms.

"She was having trouble breathing and I have never been so scared when I saw her going off in an ambulance," Mark says.

"Because you can't visit the hospital, you wonder whether you are going to see them again.

"It sounds dramatic but it's how you feel. It was a tough time."

Mark's birthday was also in May but the combination of Caroline's illness and the COVID-19 lockdown meant celebration was the furthest thing from the family of Arsenal fans' thoughts.

So when Arsenal head coach Mikel Arteta heard what had happened to the Burtons, the club gave the family a much-needed lift.

Arteta first sent a personal birthday letter to Nicholas, which made his day.

But it got even better as the head coach gatecrashed a video call they were having with comedian Matt Lucas for the Arsenal Foundation.

"To see how much the call and the letter meant to Nicholas really gave me a lift," says Caroline, who has been recovering at home and is hoping to return to restricted work duties soon.

"Knowing he's had to go through so much with me being ill and Mark and worrying so much about me, it made him be a child again.

"For the club to reach out to us like this has been absolutely fantastic."

The Burtons say the regular emails and calls from Arsenal are like "sunshine on a rainy day".

"We are eternally grateful to everyone at Arsenal for the impact they have had on us," Mark says. "The fact they managed to make Nicholas's birthday so, so special - we couldn't have wished for anything else.

"Nicholas was beside himself when he received Mikel's letter and then to speak with him was incredible. He'll be telling his grandchildren about it.

"As a family we are giving, it's in us to do what we can to help other people, so when other people do things for us, it's amazing.

"We are so humbled to have been part of that."