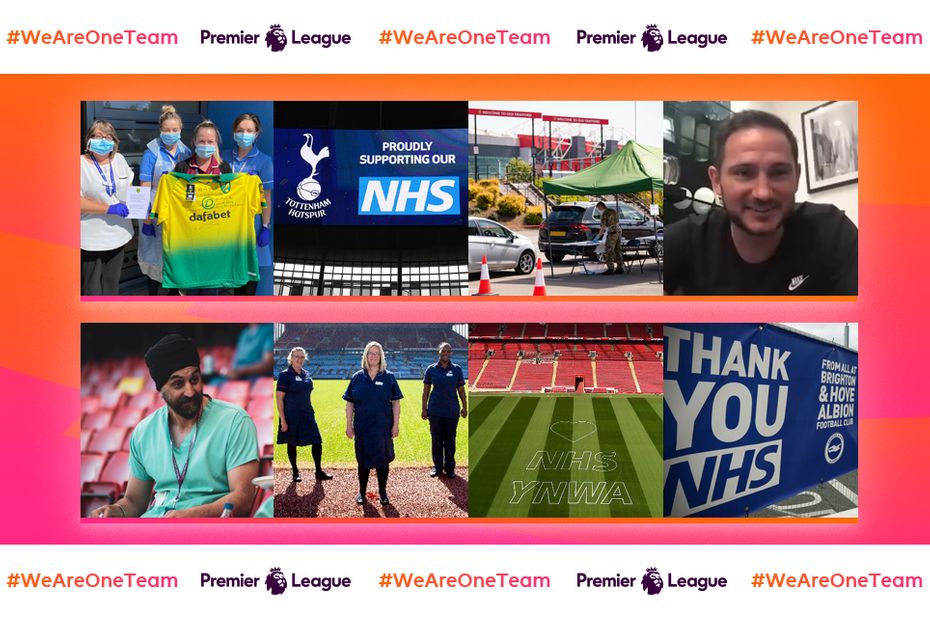 Since the coronavirus pandemic began, Premier League clubs have been stepping in to help the National Health Service (NHS) Trusts in their local communities in different ways.

Manchester City have opened the Etihad Stadium for the training of over 350 nursing staff.

A rest, relaxation and exercise centre has also been opened at the ground for NHS and social care staff, providing several thousand people with access to a quiet space every day of the week.

Alongside this, a 'click and collect' shopping service is ensuring that groceries and household supplies are readily available for staff who need them.

At the north end of the Etihad Campus, a drive-through coronavirus testing facility has been set up in one of the club's car parks.

Manchester City is proud to be playing a role as part of Manchester’s emergency response to the coronavirus pandemic. 💙

Across the city at Manchester United, a mobile testing unit has been in operation at Old Trafford, while Burnley's Turf Moor ground has also been used as a temporary testing facility.

And Tottenham Hotspur have also allowed their stadium to be used for COVID-19 testing, with a drive-through facility installed at the ground.

The Tottenham Hotspur Stadium is additionally hosting the North Middlesex Hospital’s Women’s Outpatient Services to ease pressure on the hospital itself and keep pregnant women away from risk of catching the virus.

A similar scheme is in place at the home of Aston Villa, with postnatal and antenatal care being delivered by midwives at Villa Park.

And Watford's Vicarage Road has been transformed into a sanctuary offering free meals, beds and laundry services for NHS staff working at the nearby West Hertfordshire NHS Trust. Those staff have explained in a video what the club's support means to them.

Additionally, the sensory room has been turned into a space for newly-born babies to undergo health checks and volunteers working at Vicarage Road have shared their experiences of supporting NHS staff working on the frontline.

Take a look inside and hear from just some of the wonderful volunteers we've had at Vicarage Road during the Coronavirus pandemic...

Crystal Palace's Selhurst Park is being used by London Ambulance Service staff for rest and meal breaks, with hot food and refreshments provided by club chefs.

Palace have also helped to distribute 3,000 items of protective equipment to NHS workers, while their chefs are creating healthy meals for frontline staff in addition to the ambulance crew.

Parts of Burnley's stadium, including the adjacent Elite Training Centre, are open to East Lancashire Hospitals NHS Trust to help them deal with any necessary extra hospital capacity.

Leicester City's stadium car park and other facilities have been offered to the NHS, and the car park at Sheffield United's Bramall Lane is being used by the local NHS Trust, while Norwich City have offered residential facilities.

Donations made by clubs

Wolverhampton Wanderers’ first-team squad, manager and technical staff have made a donation to the Royal Wolverhampton NHS Trust.

AFC Bournemouth's squad are supporting the Boot the Virus campaign, donating signed boots that will auctioned to raise money for the NHS.

And Alder Hey children's hospital on Merseyside were grateful for the latest gifts and support shown by Liverpool and their players.

The Reds have also donated baby clothes and essential items to Liverpool Women's Hospital to assist new mums and their newborn babies.

West Ham United have committed to a set of fundraising initiatives which will help the NHS provide vital support for patients and staff.

The Aston Villa Foundation has helped to distribute food and drinks to hospitals, while Norwich's kit managers have been delivering packages including personal protective equipment (PPE) to hospitals and care homes.

Elsewhere, Arsenal in the Community volunteers are helping NHS workers get around to do their much-needed work.

Proud of our Arsenal in the Community volunteers who are helping to transport NHS workers around north London@AFCCommunity 🤝 @CI_NHS pic.twitter.com/trdtCLZsS8

Southampton medical staff have too been supporting their local NHS Trust, and the club have gone the extra mile by delivering than 9,000 units of food and drink to four city NHS facilities for staff to use.

Chelsea are providing over 115,000 free meals to the NHS and charities that support the elderly and vulnerable groups over the course of eight weeks.

And Man Utd are preparing and delivering 60,000 meals for two local Trusts, while their Foundation has provided 16 vehicles and drivers.

Sean Dyche and several Burnley players sent messages of support for NHS staff at Burnley General Teaching Hospital, while Junior Hornets from Watford have also expressed their gratitude in a video, which you can see here.

To help local healthcare staff maintain their mental wellbeing, the Newcastle United Foundation is providing materials and video guidance through its Be A Game Changer campaign.

Leicester captain Wes Morgan has backed Show Racism the Red Card’s campaign to stop discrimination against those working in the health service.

And clubs have also made strong visual statements to show their support of the NHS.

To mark the weekly 'Clap for our Carers' minute, the pitch at Anfield has been marked by Liverpool's grounds team to create a special tribute to NHS staff.

Everton, Man Utd, Sheffield United, Spurs and West Ham have used their stadiums to pay tribute to the courageous work being carried out and shared with their millions of fans around the world.

Meanwhile, Brighton have produced special home shirts with a ‘Thank You NHS’ logo emblazoned across the front.

A number of these have been given to front-line healthcare workers, while supporters have bought more than 1,500 in less than a week, with profits going to NHS charities.

West Ham have made an initial donation of 1,000 shirts for patients and NHS staff who support the club.

Sheffield United have shown their appreciation of key workers by adding the images of Yvonne Lait and Matt Cotton, who work within the A&E department at the Northern General Hospital, to the club’s superstore.

And a number of clubs including Brighton, Burnley, AFC Bournemouth and Southampton have shown their own gratitude to NHS staff by offering them thousands of free tickets to attend matches when football resumes.

Man Utd have invited supporters to nominate their Frontline Heroes, some of whom will be selected for special recognition by the club.

And Spurs are celebrating the contributions of key workers with their Hotspur Heroes campaign.