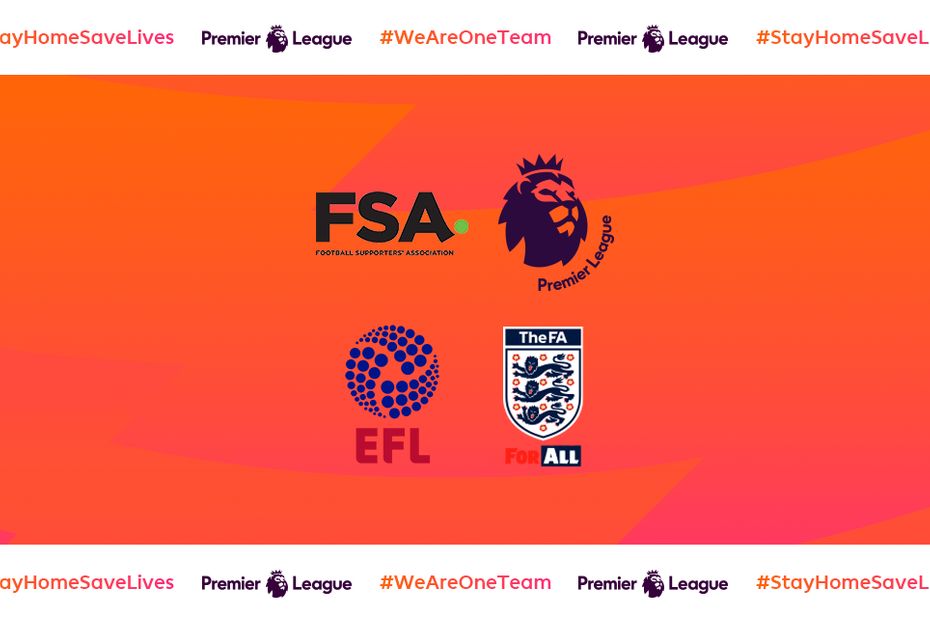 Efforts being made by clubs and supporters to help their communities making huge impact, say footballing authorities and fan association

COVID-19 has presented a hugely challenging and uncertain time for everyone and our thoughts are with all those directly affected by the pandemic. The Government's message is clear: stay at home, protect the NHS, save lives.

We are all committed to getting back to playing the game we love - but only when it is safe to do so. Amid the current uncertainty, supporters will understandably have a number of questions relating to the season and the clubs they follow, and there are no quick answers to how and when we will return to what used to be our football normality.

The Football Supporters' Association (FSA), Premier League, EFL and The FA want to reiterate that clubs and their supporters have a vital role to play in supporting the Government’s guidance and ensuring community strength and solidarity. While there is no football, our sport can still play its part.

Clubs and supporters have responded magnificently with staff, fans and volunteers supporting those most in need in their local towns and cities.

Fans can keep up to date with how the Premier League and EFL clubs are providing wide-ranging support for their communities, including the provision of facilities for medical use and accommodation for NHS staff. Clubs are also supporting foodbanks, transporting medicines and food, and telephoning the most vulnerable members of society.

Many supporters' groups across the country have also shown just how valuable they are. We have seen official supporters' trusts raising tens of thousands of pounds in their local communities, donating to local foodbanks, delivering care packages and helping NHS staff. Read more about the great work undertaken here.

The work of clubs, staff, volunteers and fans is making a difference to those in need. The FSA, Premier League, EFL and The FA encourage all clubs and supporters’ groups to remain in contact during this difficult time and, where possible, support one another in their community efforts. We also extend our gratitude to those football supporters who are key workers, and those who have offered their support on a volunteer basis.

We urge fans across the country to follow the ongoing Government advice, to provide us all with the best opportunity to keep fans and communities safe.

It is also important to note that any official communications will come from the Government and football authorities themselves. Please follow our official channels for this information.

As the situation is regularly changing, the Premier League, EFL and The FA will continue to consult the FSA and keep supporters updated on the progress made as soon as is practically possible.

Thank you, once again, for your continued patience, work and support.