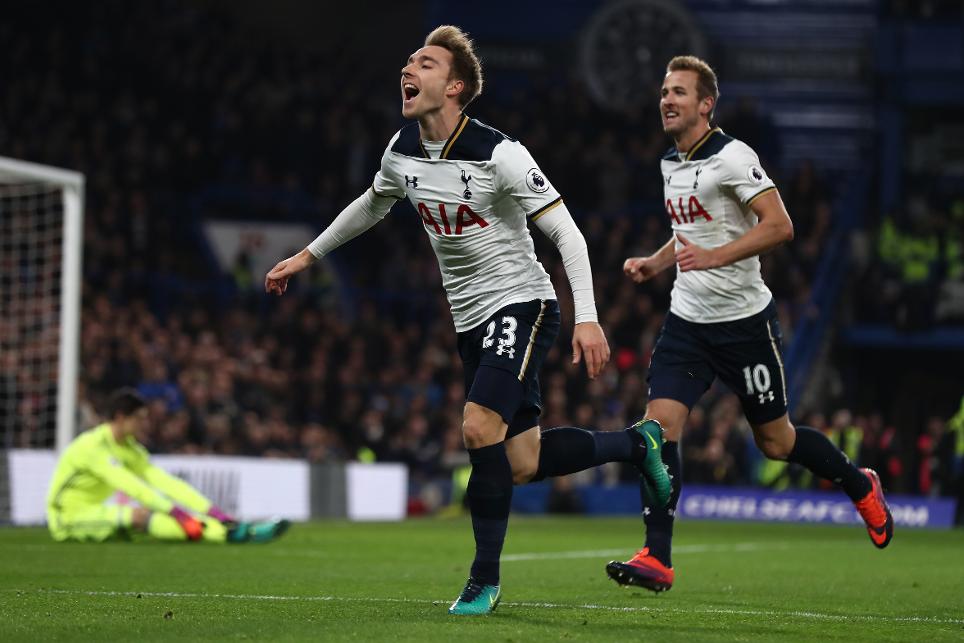 Conte: What I want to see External Link
Sanchez has Hazard in his sights

The playmaker scored 33 in the Bonus Points System (BPS) thanks to a stunning strike to make it 1-0 and also contributing three successful tackles and six recoveries.

In addition to scoring Chelsea's winner, the Nigeria international produced three clearances, blocks and interceptions (CBI) and six recoveries as the Blues extended their winning run to seven matches.

Nemanja Matic (£5.1m) was awarded the remaining bonus point. Scoring 24 in the BPS, the Chelsea midfielder supplied the assist for Pedro's (£7.3m) goal and also registered nine recoveries and a successful tackle.

Eriksen also claimed top spot in the ICT Index, thanks to an overall score of 9.7.

Grabbing his first goal of the season, the Spurs playmaker fired four attempts on goal, with two on target.

Chelsea's Diego Costa (£10.6m) clinched second spot with a tally of 6.8 but he managed only one close-range effort to record 16 for Threat, his lowest total of the campaign.

Costa did, however, create two scoring chances for team-mates, providing the assist for Moses' winner.

In a rather subdued home display, the Belgian fired two attempts on goal but did register more successful passes in the final third (13) than any other Chelsea player.

The forward has now produced attacking returns in 11 of the opening 13 Gameweeks and is only one point behind Hazard at the top of the overall standings.

Pedro's effort means that he has now served up three goals and four assists in six Gameweeks. He continues to offer value for money as an alternative or a partner to Hazard in our midfields, as the fixture schedule turns in the Blues' favour from Gameweek 15 onwards.

Both Moses and Matic also appeal in the sub-£6.0m bracket.

The Serbian has now supplied seven assists in 2016/17, second only to Manchester City's Kevin De Bruyne (£10.8m), with nine.

Eriksen's goal threat finally came to fruition as Chelsea conceded for the first time since shifting to a 3-4-3.

The Denmark international is ranked third among midfielders for attempts on goal over the first 13 Gameweeks and has home encounters against Swansea City, Hull City and Burnley to come in the next four.

With concerns mounting over an ankle injury to Liverpool's Philippe Coutinho (£8.7m), Eriksen offers a similarly priced replacement should the Brazilian face a spell on the sidelines.

Dele Alli (£8.1m) was handed a first start in three Gameweeks and supplied the assist for Eriksen's opener. He is owned by less than 5% of FPL managers.

Spurs manager Mauricio Pochettino will welcome back Danny Rose (£5.9m) next weekend after the left-back served a one-match ban at Stamford Bridge.

Toby Alderweireld (£6.3m) was also absent again through injury but has stepped up his recovery and could be back in contention for Gameweek 14.