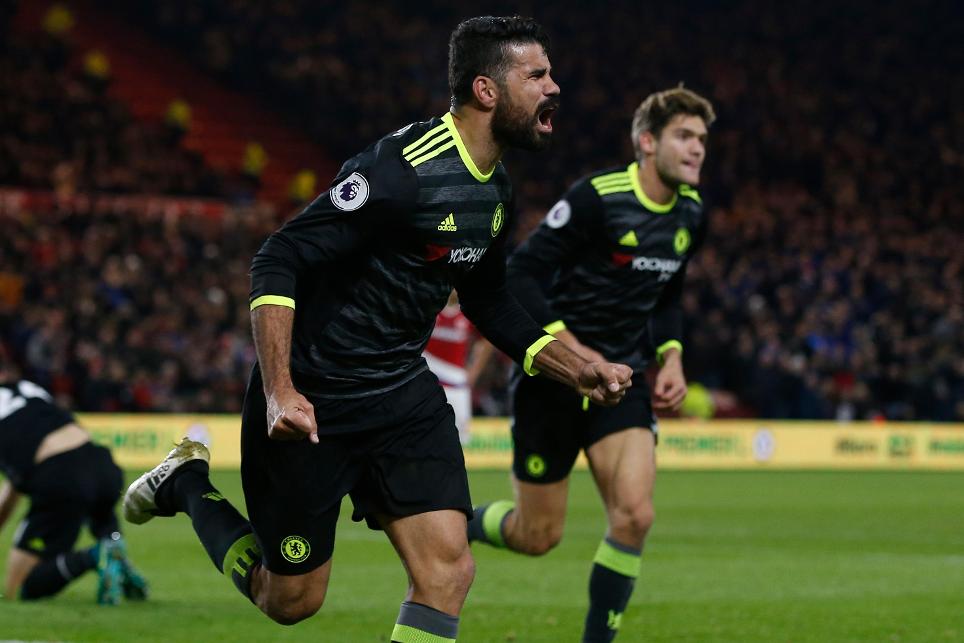 Chelsea dominated the Fantasy Premier League bonus points in their 1-0 victory at Middlesbrough.

The Spain international provided four key passes in addition to a 10th goal of the season.

The centre-back made 10 clearances, blocks and interceptions (CBI), four recoveries and won two tackles to record 31 in the BPS.

The winger served up six key passes for team-mates, more than any other player in Gameweek 12 so far, in addition to completing seven dribbles.

Hazard's six key passes helped earn him a Creativity score of 78 in the ICT Index, a total unmatched in the Gameweek with only one match yet to play.

The Belgian registered an overall Index haul of 10.3, a tally bettered only by team-mate Costa at the Riverside Stadium.

The striker recorded 16.5 in the Index, including a Threat score of 73 made up of nine touches in the box and three attempts on goal.

Costa's relentless goalscoring form cemented his spot at the top of the FPL forward charts on 82 points.

Still sitting on four yellow cards, the Chelsea striker has gone six Gameweek appearances without another caution and a subsequent one-match ban.

Costa must navigate past Gameweek 19 without earning a booking to escape any ban for yellow-card accumulation.

Despite failing to score or set up a goal for the first time in five Gameweeks, Hazard remains the top-scoring FPL asset overall on 86 points.

But he and Costa have showed contrasting fortunes on their travels this season.

Costa has scored six of his 10 goals on the road, earning exactly half of his points away from Stamford Bridge.

In contrast, Hazard has scored only one of seven goals away from home, with 58 of his 86 points arriving in home matches.

SCOUT: A blank from Hazard having returned in his last 4 Gameweeks. Only 1 of Hazard's 7 goals have come away from home. pic.twitter.com/RCH47zig6V

Chelsea earned a seventh clean sheet and have shut out their opponents in each of their last six Gameweeks.

That coincides with the introduction of Marcos Alonso (£6.1m) and a switch to a 3-4-3 system.

In addition to earning points from clean sheets, Alonso ranks top for defenders for ICT Threat (131) over those last six Gameweeks and third for ICT Creativity (132), highlighting his promise in the attacking third.

As Alonso continues to impress, Chelsea boast the top-scoring players in defence (Cahill, 58 points), midfield (Hazard, 86 points) and attack (Costa, 82 points), while Thibaut Courtois (£5.6m) is only a point behind the leading goalkeeper, Tom Heaton (£4.8m).

Middlesbrough will take comfort from another combative display.

Despite suffering defeat, their FPL defenders have conceded only two goals in the last four Gameweeks and four in the previous six.

That promotes interest in Ben Gibson (£4.7m) ahead of an improving schedule of fixtures; Hull City and Swansea City are two of the next three opponents to visit the Riverside.

George Friend (£4.5m) could be out of the equation for the time being, after missing Sunday's encounter with a knee injury. He may be sidelined for the next two Gameweeks.